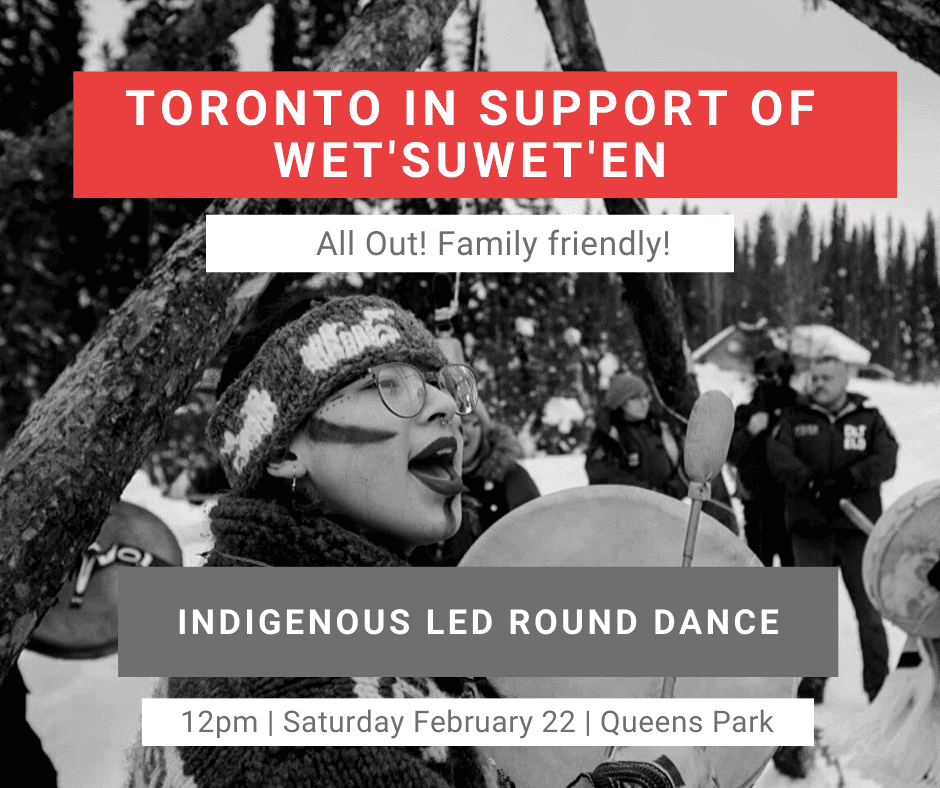 On Saturday, Feb 22, join a peaceful Indigenous-led round dance to show your support for the Wet’suwet’en land defenders. This is a family-friendly event where allies are welcome to add their voices to the ongoing protest, while also being a great opportunity to further educate ourselves.

For those of us far removed from the front lines in BC, trying to comprehend what exactly is happening, and the historical context, can be tricky. We’ve been reading as much as we can, and have found the five following resources most helpful in understanding the big picture.

“Wet’suwet’en is an Indigenous nation whose territory covers around 22,000 sq km of land (would have been much larger before contact) in northwest B.C. Before first contact, you need to visualize Canada (aka Turtle Island) as a territory that held many, many sovereign nations, each with their own unique cultures, laws, and governance systems. For all intents and purposes, it would have looked more like present-day Europe in that it was a land of many distinct nations.

Each nation has jurisdiction over their lands and peoples, so those laws and protocols would have looked different depending on whose territory you were on. Again, think of the difference when you travel from Italy to Sweden. Colonization has brainwashed people into believing you can say “Indigenous” and it’s all the same (hence the term pan-Indigenous), but this is not true. Would you say all Europeans love schnitzel? No.

Upon contact, this did not change. Nations continued as they always had. When settlers established trading posts, they did so with the consent of the nation of whose territory they wanted to work on. Let me be very clear – they would have NEVER survived without the knowledge, wisdom, and generosity of the Indigenous nations they were living with.

In 1867 came the “birth” of Canada. This is when Parliament decided, with no consent of Indigenous nations, to assert jurisdiction over them and claim the land as their own. They did this most notably through the Indian Act, which is still in place today.

Part of the Indian Act, which I believe we are becoming more familiar with, were the tactics of assimilation through Residential Schools. But another thing the Indian Act did was create and forcibly implement a new governance system, the band council (aka “elected chiefs”), onto Indigenous nations. This governance system was specifically designed to mimic the Canadian system and ignore traditional First Nations governance. Essentially, the band council is an extension of the Canadian government and is designed to assimilate the nation into Canada to facilitate colonial settlement and resource extraction.

When the media/elected officials start blasting, “but the band council says this,” this is what you need to keep in mind. Do you think it’s a coincidence that the Canadian government didn’t go to the hereditary chiefs (traditional governance) and instead went to, and continue to publicly proclaim the decisions of elected officials in a system the government themselves created? No, it’s not a coincidence, it’s strategy.

However, traditional forms of governance did not end in 1867 and they did not end with the Indian Act. They have never ended. Nations never surrendered their sovereignty over to the Canadian government and protocol has always been that the band council has jurisdiction over what happens on reserve, but hereditary chiefs have, and have always had, jurisdiction over traditional territory.

So, remember the 22,000 sq km I talked about before? That’s what the hereditary chiefs have control over and what is in contention with Coastal Gas Link today. So, when you hear the band council say yes to pipelines but the hereditary chiefs say no (or propose alternate pipeline routes), all that matters is what the chiefs say. That 22,000 sq km is not reserve, it’s traditional territory, which, again, can be confusing because we have been brainwashed into believing Indigenous peoples only live on reserves. No. The Canadian government has done what they can to forcibly remove Indigenous peoples off of their traditional territories and onto reserves. So yes, the reserves do exist absolutely, but this is different. This is sovereign, never surrendered, traditional territory. Consent lies with the hereditary chiefs.

Fast forward to 1984. The Gitxsan (a neighbouring nation) and Wet’suwet’en leaders took the provincial government to court to establish clear jurisdiction of their traditional territories as the government wanted to log it extensively. The case ended up going to the Supreme Court of Canada and after 13 YEARS the decision of Delgamuukw v. BC on December 11, 1997, was historic: The SCC found that BC had no authority to extinguish Aboriginal rights. The decision also defined Aboriginal title as Indigenous peoples’ exclusive right to the land and clarified it is the government’s duty to consult with Indigenous peoples. It also states that Aboriginal title rights include not only land but the right to extract resources from the land. In the case of the Wet’suwet’en, that means the hereditary chiefs have the rights and titles to their land so therefore any consultation for industry projects must go through them.Furthermore, under the United Nations Declaration on the Rights of Indigenous Peoples (UNDRIP), which BC provincial government adopted into law in 2019 (!!!), the free, prior, and informed consent of Indigenous peoples must be obtained before government and industry can go through with any project.

Therefore, Wet’suwet’en, Canadian, and international laws do in fact recognize the hereditary chiefs as the rightful decision-makers on their respective territories. These rights and titles have never been extinguished or surrendered. By all legal rights, they are sovereign people.

Furthermore, in Canada, the duty to consult is a statutory, contractual, and common law obligation that must be fulfilled by the Crown prior to taking actions or making decisions that may have consequences for the rights of Indigenous peoples. This has been affirmed and clarified by various SCC rules including the Haida case in 2004, Beckham v. little Salmon/Carmacks case in 2010, and Tsilhqot’in Nation v. BC in 2014.

So, when consultation happened, the hereditary chiefs of all five clans of Wet’suwet’en unanimously opposed the pipeline proposal and did not give consent for Coastal Gas Link/Trans Canada to work on their lands. The Wet’Suwet’en hereditary chiefs instead proposed an alternate route for the pipeline that wouldn’t go through sensitive cultural and ecological areas.

On December 31, 2019, the Supreme Court of BC ruled that the permits of Coastal Gas Link trumped Wet’suwet’en law.

Read that again. Industry permit somehow was chosen over law that has been in place since time immemorial. What is our justice system?

This ruling in a court in BC against Indigenous rights and reconciliation truly proves that industry, not people, can control the government and its “laws.” After this ruling, the Wet’suwet’en respectfully evicted CGL from their territories – as a reminder, only the Wet’suwet’en have the say as to who can be on their lands as shown by traditional, national, and international, laws. The Wet’suwet’en then put the blockade back in place and the BC government decided to utilize the RCMP as hired guns to uphold the court ruling for an industry injunction.

I’ll say it again: the BC government hired the federal police force to uphold an illegitimate injunction on a sovereign nation.
—
The original author’s name has been withheld for their safety; the RCMP have gone to their workplace twice so far in an effort to have them fired/intimidated/muzzled.
#WetsuwetenStrong 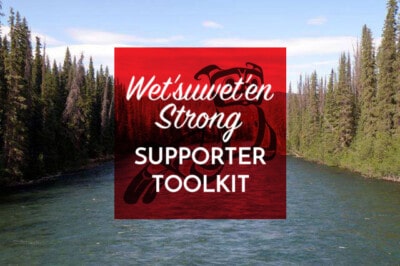 If after reading all of this, you feel moved to do more, this Wet’suwet’en Supporter Toolkit is a great place to start. We hope to see you this Saturday outside Queen’s Park. Make a sign, bring your kids, join the dance, or just listen.

Toronto in Support of Wet’suwet’en Round Dance is happening this Saturday (Feb 23) at Queen’s Park, 12-3p.m. RSVP on the Facebook event page.