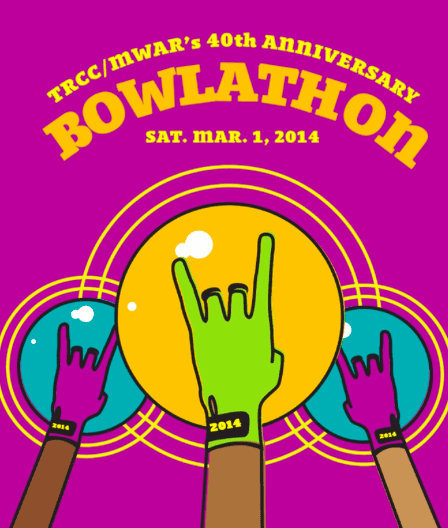 In a short and successful forty years, the Toronto Rape Crisis Center has made many strides in advocating for survivors and fighting for the eradication of violence against women and children. Through structured programming, 24-hour crisis counselling, court support, community initiatives and campaigning at a legislative level, this grassroots organization that started in 1974 in the heart of a busy and rapidly changing multi-cultural city now serves and supports over 20,000 women, trans* folk, youth and men each year.

This women-run collective is one-of-a-kind; TRCC takes a feminist and anti-racist approach to their community work and mandate, aiming to empower survivors to define their own meaning for a happy, empowered life after sexual assault. “We believe survivors of sexual violence are experts in their own healing,” said deb singh, a community activist and counsellor at the TRCC. “Together we work toward creating a thriving community, empowering survivors of all races, classes, ages, gender identities, sexual orientations, abilities and spiritualities.”

Last Friday, February 14th marked the the 40th year of the TRCC’s existence and 21st consecutive year hosting their successful annual Bowlathon fundraiser. We asked the team at TRCC, including deb, a few questions about the work they do and the gains being made for women in Toronto and across Canada.

SDTC: What are the biggest myths or misconceptions about sexual violence in Canada?

deb singh: I think some of the biggest myths is that it doesn’t happen in certain communities or to certain people. Sadly, there is no group, race, community, that sexual violence has not happened in/to. Affluent, rich people experience sexual violence as do poor women. Another myth is that women do things to “ask for it.” No one “asks” to be sexually assaulted. If they did, that would mean it was consensual. Women do not provoke violence by going into a man’s apartment after a date or wearing certain clothes. Women should be able to be safe regardless of her fashion or actions, men need to stop violating women.

SDTC: What are some other barriers stopping women from getting access to the help they need?
ds: Black women and Indigenous women who experience violence may also experience poverty, homelessness, inability to work or go to school after an assault. She may also have a disability, be non-status or have children, and this will affect her ability to get the support she needs. It is these needs that the TRCC aims to directly support through funding that is raised with the Bowlathon. The monies go towards initiatives run by and for Black women’s groups, women who have experienced conflict with the law and [the] upgrading [of] our community computer lab.

SDTC: The Ontario Coalition of Rape Crisis Centres has been around since the 1970s, what are the two biggest markers of progress since then?
ds: [For one,] the criminalization of sexual assault under the Criminal Code of Canada in 1984, although this has not stopped sexual assault from happening. [Secondly,] that society has begun to break the silence around sexual violence by talking about it more openly and accepting that it does happen, women don’t “ask for it,” and that it is not ok to treat women and girls this way.

The TRCC has advocated for change and reform of troublesome laws surrounding sexual assault since the Ontario Coalition of Rape Crisis Centres came into existence. singh said widespread misunderstanding of the root causes of sexual assault remains a major concern. “It’s about power and control,” she reminds, in contrast to the socially reinforced idea that sexual assault is about sex. Another large hurdle yet to be overcome is society’s mass participation in disbelieving women who find the strength to come forward as survivors.

Whether you’re a woman dealing with a recent crisis or navigating the difficulities of life as a survivor, the Toronto Rape Crisis Centre is a safe place that offers solace, support and resources that may otherwise be unavailable to those in need. The Bowlathon has provided the Centre with more than $100,000 in its most successful years, an impressive growth from their first Bowlathon fundraiser 21 years ago that raised under $10,000. As the community grows, its needs grow, and one of those needs remains the TRCC, so get involved and become part of a vital community resource.

How the Bowlathon works:
The Bowlathon is an afternoon where community members raise money by getting pledges and being on a bowling team. They come for a shift at the Bowlerama West Bowling Alley (5429 Dundas St. W) and bowl for 3 hours, where they turn in the funds they raised. Fundraisers receive a buffet meal, prizes and gifts for their fundraising efforts and there are approximately 40-60 teams each year. The TRCC is still looking for teams; contact bowlathon@trccmwar.ca to register yours! SheDoesTheCity will see you there on March 1st! If you can’t make it down, sponsor a lane or donate here.

You can also make a difference by sharing information, telling your friends and family that the TRCC is here to stay, or becoming an active member in the TRCC’s online community.