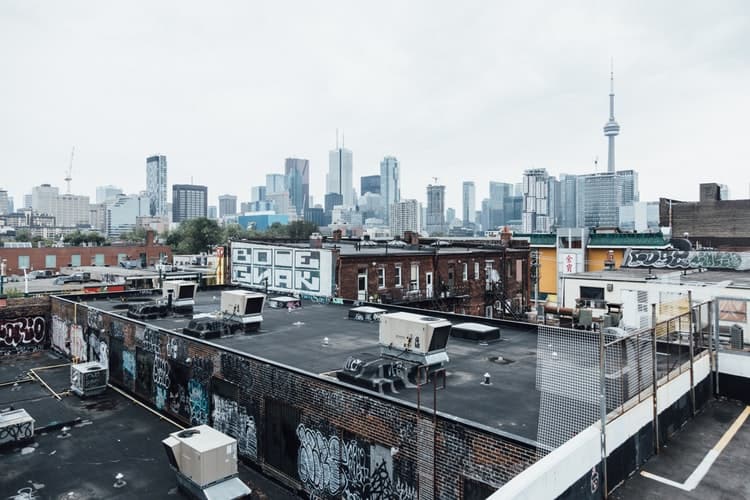 Why I Left Toronto and Moved Back in with My Parents

When I found out I was pregnant with my second kid, I scanned our cramped one-bedroom apartment in the west end of Toronto and thought, No friggin’ way.

While it was fine-ish for the three of us (though my husband was perennially camped out on the couch), it was not going to fly with four. Our salaries were being swallowed up by rent, and we were going into debt to make up the difference. Sure, we were living in a fantastic city that we loved, but we never had the time (or cash flow) to enjoy it.

My husband had an idea: Why don’t we just move? He’d quit his job, and we’d give up our apartment and move in with my parents until we got on our feet. I balked, but the more I thought about it, the more it made sense. In Toronto, we were a seven-hour drive away from my parents’ place back in Northeastern Ontario. With another baby on the way, it would be a boon to have some help. I couldn’t remember the last time I’d had a night off, and mom’s babysitting was an enticing prospect. He put in his notice at work, and we set the date to leave the city where we met.

Being back was surreal. The small town where I grew up was the same. My parents were now living in the enormous house that my mom grew up in, where I’d spent countless hours as a child. The house is steeped in happy memories for me—picking raspberries in the backyard, hollering out to passersby from the front verandah, watching my grandmother, Lucy, at work on a painting.

With four adults, a preschooler, a new baby and two dogs, it was a full house. We were quickly reacquainted with each others’ quirks: my dad’s seeming inability to shut doors quietly, my mother’s insistence of tchotchkes on every available surface, my sleep-deprived snippiness. You’re never alone. There’s no end to the laundry or the diapers or the dishes or the dog hair. But everyone pitches in.

I was reintroduced to what life was like in a small town. Knowing all of your neighbours—and all of the associated gossip and intrigue. An open door and an endless stream of visitors. Having someone hand-deliver the sippy cup you dropped during your walk. The entire town sending out Facebook alerts and finding your dog when she gets lost. People at the church down the street praying for your husband’s cancer surgery. Watching your daughter take her first steps in the living room while her grandpa and brother cheer her on. So many small, ordinary moments that become a predictable and comforting pattern, stitched together across the year.

We live in a society that celebrates the idea of making it in the big city. We’re eager to display our insta-worthy pursuits, showcasing our “best lives” filled with novelty and excitement. We’re all so self-focused; striving to get ahead. It can get exhausting and more than a little lonely.

There is something to be said for different generations all living together under one roof. Sharing the joy and boredom, heartache and hope, it creates memories that bind you. In my twenties, I used to consider moving back in with your parents to be a worst-case scenario; it meant you were taking a step back, that you’d failed somehow. Now, I realize it was the one thing that helped us move forward. And that little baby girl? I named her after my own grandmother, Lucy.

No-Regret Decisions will help you take the leap: A Q&A with financial expert Shannon Lee Simmons