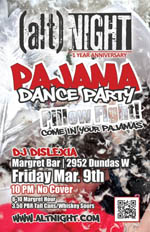 March 9th-31st Legally Blonde: The Musical @ The Lower Ossington Theatre, 100 Ossington Ave. “Sorority star Elle Woods doesn’t take no for an answer. So when her boyfriend dumps her for someone serious, Elle puts down the credit card, hits the books, and sets out to go where no Delta Nu has gone before: Harvard Law! Along the way, Elle proves that being true to yourself never goes out of style!” $45-75 tickets available at the theatre box office or online.

7 pm International Women’s Day Art Show @ Steam Whistle Brewing (The Roundhouse), 255 Bremner Blvd. “Exposed: The Female Perspective highlights female artists of this generation, who are representative of the art movement today. This work shares a common focus by commenting on contemporary art as a whole through the female perspective while emphasizing the significance of process. Putting their most intimate selves on display, this group of female artists explore their inner most thoughts, feelings and desires while creating a statement on societal expectations in an unedited and paradoxical movement.” Until 11 pm. Exhibition runs for the month of March.

9 pm Mash-Up Karaoke @ The Wilson 69, 615 College St. A night of drinks and campfire-style mash-up sing-a-longs! How it works: instrumental tracks are played (some by request), you feel the rhythm and sing the lyrics to a different song, the mic is passed around to anyone who has something to sing, and then everyone sings along!

7 pm Day Trippin’ @ One One Gallery, 88 Harbord St., Unit 2 (above Splendido). Laura–LynnPetrick presents her first solo exhibition in Toronto. “Day Trippin’ intertwines the hazy, free living, irresponsible lifestyles of modern youth, with the wild, substance-induced, audial happenings of today’s generation. The exhibition is Petrick’s personal vision of the utopian qualities of everyday life, from morning to late, through travels and ’trips.”

10 pm (ALT)Night 1 Year Anniversary Pajama Dance Party @ Margret, 2952 Dundas St. W. Celebrate (ALT)Night’s 1 year anniversary in comfort! Dress in the most sexy comfy clothes you own (the ones you shake your rump to during a random hearing of Destiny’s Child) and bring some snacks for the potluck if you like (there will be lots of stuff, including a giant pot of KD). DJ Dislexia keeps it jumpy so you can dance, and once you’re fed and need a dance break, get your photo snapped in the booth! $3.50 PBR tall cans and whiskey sours from 8-10 pm (drunk feet dance better).

10 pm That Time Of The Month @ The Henhouse, 1532 Dundas St. W. DJs Alex Molotkow and Chandler Levack bring you the most righteous soul, disco and R&B by the women that understand.

11 pm Grandtheft’s A/V Dance Party @ The Drake Underground, 1150 Queen St. W. Grandtheft (producer/songwriter/DJ/VJ based out of Toronto and co-owner of Montreal dance club Blue Dog Motel) throws one of his infamous A/V dance parties where all your favourite hits are mashed-up in audio AND visual form! $10.

6:30 pm Shinsedai Sneak Peek Party & Screening @ Cinecycle, 129 Spadina Ave. On the eve of the first anniversary of the Tohoku earthquake, The Shinsedai Cinema Festival hosts a celebration of Japan’s culture, creative spirit, and laughter. Featuring the Canadian premiere of the omnibus comedy film “Quirky Guys and Gals” and a raffle, with $1 from each ticket benefiting the Niji-Iro Rainbow Cinema Support Project, a Tokyo-based charitable initiative that brings free movie screenings and hot meals to Tohoku families still living in temporary shelters. DJ Brandon Hocura kicks off the party at 10 pm. $10 at the door.

9 pm We Put the Spring in Springfield: A Simpsons-Themed Burlesque Show @ Toronto Underground Cinema, 186 Spadina Ave. The Underground Peepshow wants to give you a giddy little thrill straight from their favourite animated town: Springfield! Be sure to brush up on your Simpsons trivia for a chance to win prizes. $12 advance tickets available at Toronto Underground Cinema, Silver Snail (367 Queen St. W.), Eyesore Cinema (801 Queen St. W.), and Suspect Video (605 Markham St.), $15 at the door.

10 pm Lucky Bitches @ The Ossington, 61 Ossington Ave. Two ice stallions serve it up hot with a glamour positive party for anyone who knows what it’s like to be a lucky bitch. The guiltiest of pleasures all night: hitz that span the ages, 90’s hip-hop, contemporary hitz, 80’s velvet jamz, forgotten gemz.

10 pm Cadence Conference / I Know You Care @ Crawford, 718 College St. Local legends compete for the title in MC Battle Cadence Conference. I Know You Care happens before and after, with DJs Boots Boogie (wish him a happy birthday!) and Shanelle Williams upstairs, and DJs James Redi and Dustbuster downstairs, playing hip-hop, reggae, funk, disco, and 80’s. $5 before midnight, more after.

10 pm Business Woman’s Special @ Augusta House, 152-A Augusta Ave. The DJ debut of Dean McArthur alongside residents Nino Brown and Sammy. Kimon will fulfill all your photographic desires in the photo booth. $5.

10 pm Turning Point @ The Garrison, 1197 Dundas St. W. Special guest DJ MILES Cleret stops by to share tropical rhythms and sounds from another time (1950-1980). Music from far off places and cultures, all from old vinyl.

9:30 pm Crosswires #3 @ The Garrison, 1197 Dundas St. W. A new Sunday night series brought to you by Doc Pickles, co-founder and emcee of of Wavelength. Featuring the swaying awesomeness of the Cubadors, the twisted upside sludged out pop of Mandeverest, Impermanent People, and The Watershed Hour. Featuring General Chaos Visuals and DJ selector Acacia Christensen. Sponsored by Steam Whistle. PWYC.