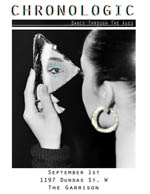 10 pm Fort York & The DoneFors & Alanna Gurr @ The Dakota Tavern, 249 Ossington Ave. This will be the last show alt-folk band Fort York plays for a little while so come and show your support! With The DoneFors and Alanna Gurr.

10 pm Steppers @ The Beaconsfield, 1154 Queen St. W. The soundtrack for all rude boys and girls. Expect to hear ska, rockers, and dub early in the night followed by modern shots from the house, dancehall, hip-hop, etc. genres.

6 pm The Diana Baby Blue Hour @ Lomography Gallery Store, 536 Queen St. W. Lomography celebrates a new addition to its beautiful medium format camera family, the Diana Baby 110! To honour this newest baby, they are throwing a stylish Blue Hour to celebrate the newest and smallest “fashionista” in town. Dress your best because this party is also the Opening Reception for their very special Canada Rumble Competition where we will be exhibiting the winners’ photographs. Until 9 pm.

9 pm Crush Party: Capes & Comics @ The Central, 603 Markham St. Dress up like your favourite superhero or comic book character (costumes are welcome, but not required)! With DJRayRuby on the decks and a burlesque performance by Belle Jumelles, accompanied by the vocal styling of Johnny B Goode. $7.

10 pm Cloud Spotting @ Bambi’s, 1265 Dundas St. W. Float along with DJs Pooyan and Lazy Ray as they dig into their bag of holding to bring you deep and tasty morsels of funk, disco, and other cosmic jams.

10 pm Shindig! Presents: Motown vs. Stax @ The Piston, 937 Bloor St. W. The battle of the two best Soul labels in history is on! With resident 45 selectors, Parkdale Funk, General Eclectic, and Splattermonkey Y’all. $5.

10 pm Jamz! @ Clinton’s, 693 Bloor St. W. An anything goes, no bullshit, non-genre, dance ’til you drop, all your friends in one room, party hard, make the floor wet with sweat, shit show!

10 pm Reality Bytes @ Augusta House, 152-A Augusta Ave. Travel back in time to the 90’s! DJs 4est, Lindzrox, and Jrox spin all your favourite dance, hip-hop, electronica and alternative 90’s tunes. Free before 11 pm, $5 after.

11 pm Never Forgive Action: 8 Year Anniversary @ The Drake Underground, 1150 Queen St. W.
NFA started at Stones Place. Then they were banned from Supermarket. Then they rocked the now-defunct Gypsy Co-op. And they’ve now been blessing the Drake Underground for years. Combine them all together and you’ve got eight years of NFA to celebrate! Classic hip-hop and R&B super jams all night long from DJ Numeric, Ted Dancin’, and Dalia + special guest DJs Agile and Mensa. Vintage rap videos on the screens! $10.