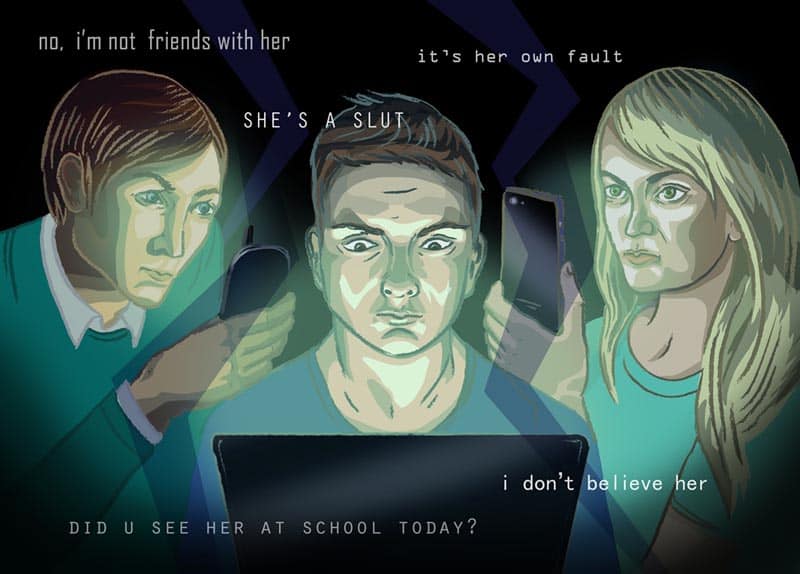 Last Sunday, 17-year-old Rehtaeh Parsons was taken off life-support following a failed suicide attempt. Depression led Rehtaeh to take her own life, but what led to her depression is heartbreaking and disturbing.

A Facebook memorial page set up by her mother states that in November 2011, Rehtaeh was allegedly raped by four young boys while drinking at a friend’s house. One of the boys took a photo of her rape, which then went viral and spread throughout her school and community of Dartmouth, Nova Scotia. Rehtaeh was labelled a “slut”, shunned by friends, and harassed to the point of having to move out of Dartmouth to Halifax. She struggled with depression and checked herself into a hospital for six weeks after she began experiencing suicidal thoughts. Her rape was investigated by police but they concluded that there was not enough evidence to lay charges. (The case has since been reopened.)

What’s upsetting about Rehtaeh’s story (besides the fact that no one has been charged with her rape) is that victim blaming and bullying denied her recovery from such a traumatic experience. What’s worse is that it came at the hands of her attackers, peers, and so-called friends – not unlike the recent Stuebenville, Ohio rape case. The 16-year-old victim in that case had photos and videos of her appearing to be unconscious at a party posted online, and was blamed for how much alcohol she consumed on the night of the rape. While each case has had a different outcome, both raise important questions about the way society views rape and sexual assault, and the impact of cyber bullying.

Let’s first get one thing straight: rape is never, ever the victim’s fault. No one asks nor deserves to be raped and attaching the word “slut” to an attack encourages such beliefs. When these beliefs manifest themselves in the form of cyber bullying, they become dangerous.

There was no such thing as cyber bullying when I was growing up, and I’m thankful for that. Being without the internet made homework a hassle, but those who were bullied or teased at school were allowed some sort of peace from it all when the school day ended. If you’re a teen today, chances are you’ve experienced cyber bullying in some form, be it victim, bully, or observer. As Rehtaeh’s case shows, text messages, pictures, Facebook comments, and tweets can have just as much impact as – if not more than – physical bullying. All it takes is a click to destroy someone’s life. And while not every case of cyber bullying leads to suicide, some do, and that’s some too many.

It may be impossible to put an end to cyber bullying, but it’s not impossible to change people’s – specifically youth’s – approach to it. Let’s first recognize that cyber bullying can be a crime, particularly when it involves distributing compromising photos of a person or causing someone to feel threatened. It’s also important to understand that what you post on the internet is forever, living on in the form of screen grabs and retweets. Do you really want hurtful and embarrassing things you wrote about someone to pop up when, say, a future employer happens to Google you? No, you don’t. Not to mention the lasting impact what you post will have on the person it’s directed towards.

No lives should be lost because of victim blaming or cyber bullying but, as Rehtaeh has shown us, sadly, some are. If there’s one thing we can learn from her death, it’s that words can hurt just as much as sticks and stones.