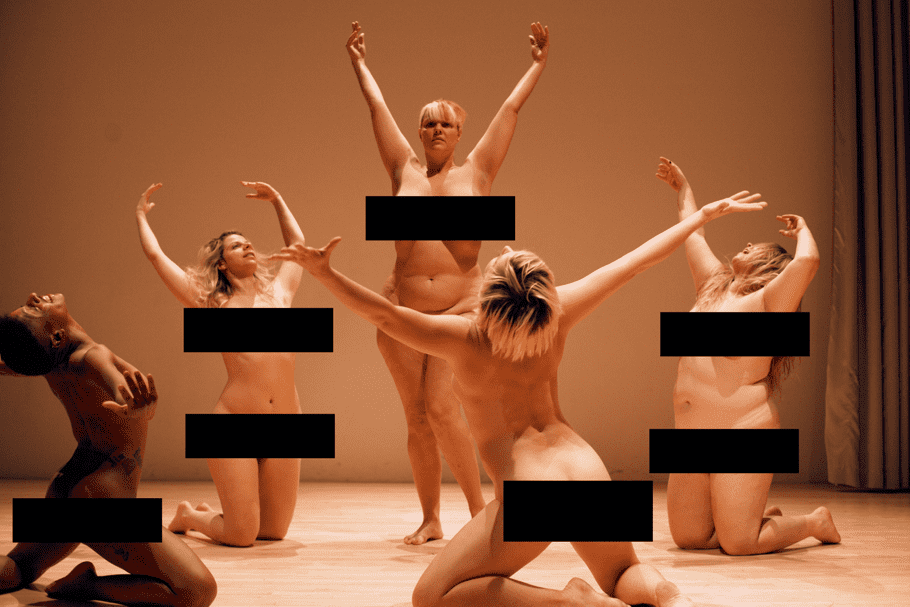 How often are you naked? Of course, there’s the “getting out of the shower” naked, the sexytime naked, the “I just came home from work and can’t bear to wear clothes get them off me” naked and all the other ones that you may encounter throughout life. But really, how often are you just naked, going through your day? And how comfortable are you with that? Do you wish you were naked more or less? When you catch a glimpse of your real, honest body in the mirror, how do you react?

The six performers move through the audience, down onto the stage and immediately, you’re confronted by six wildly different, unique bodies. They all have a variety of abilities — some performers evidently have traditional dance backgrounds, and some don’t. But one of the most powerful, most beautiful things about Untitled Feminist Show is that by the end of it, the naked bodies aren’t the thing that you’re focusing on. It’s the movement and the expression, what the performers are saying without saying anything, without wearing anything.

There’s a variety of instances that really stick out and pack a punch. A moment that includes all the performers prancing joyfully around the whitewashed stage with frilly pink parasols, full of joy contrasted with an electronic hip hop mash-up that reflects on the tropes of being a woman (think breastfeeding, vacuuming and feeding a baby), and a truly powerful cabaret of gender with a flow from persona to persona. But one of my favourite scenes involved two of the performers who spark what appears to be a friendship and then fall in love, figuring out the delicate way they can be intimate with each other. It’s loving and tender, and really stays with you.

At the very end of the performance, (spoiler alert!) the performers come out for curtain call in their own clothes. And it changes everything. The way the audience sees them, the way they carry themselves. They don’t seem more comfortable in clothing, but they do become different people. It’s really a very surprising and curious thing to witness.

This show isn’t manicured and precise — the performers strike movements in their own unique way, and that’s again something that makes it beautiful. There are moments where you may feel uncomfortable — you may make the realization that you are looking at these performers’ bodies in a way you have never considered your own. It will make you think. But the single word I would use when describing this performance is graceful. These people are doing interesting, powerful things and do them so naturally, without the defensive and often restrictive barrier of clothing.

Untitled Feminist Show makes you think about the sheer spectrum of expectations that are put on you when you identify as a woman. You’re expected to be feminine, reserved, delicate, efficient, and a million other things all at once. In reality, Untitled Feminist Show demonstrates that those things, those expectations, aren’t what make you who you are. It makes you question who you could be, who you want to be and that is a powerful thing.

Untitled Feminist Show is playing as part of World Stage 2014 at the Harbourfront Centre from February 12-15, 2014. Be sure to take a look at the rest of the festival’s schedule and performances on their website. Take advantage of the screamin’ deals. Go see something that will make you think and question.