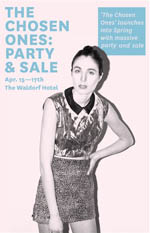 The Graduate
The Graduate makes its debut this weekend, and though you won’t be honouring your eyes with the glory of Dustin Hoffman, you’ll definitely enjoy the story of Benjamin Braddock’s post grad haze of women, seduction, and perilizing self-doubt.  Granville Island Stage, 1585 Johnston Street

Chosen Ones Pre-Sale
The Waldorf is doing it again, The Chosen Ones Pre-sale is going down before it officially opens up on the weekend! Hit up the selection from local curators like Mila Franovic, Wendy Cook, Dandi Wind, and Angelina Corona for a great way to spend your tax return.  The Waldorf Hotel, 1489 E. Hastings Street

Chosen Ones Dance Party
Yep, after checking out the pre-sale, you can go dance in your new clothes in a huge dance party in the basement of the Waldorf. There will be ten different DJs, a live hair show from Barbarella, a video installation by Mila Franovich, and a nail service by the amazing Cristina Culver. Honestly, where else should you be on Friday night
The Waldorf Hotel, 1489 E. Hastings Street

Jack Beats at Venue
Jack Beats is simply the best of the new wave of British house music. You’ll probably hear this stuff in a year or two from Rihanna. This British duo is breaking it down at Venue, and yes, it is a Wednesday night, but that’s what sick days are for.
Venue Nightclub, 881 Granville Street

Vancouver Hit List: Brazil Fest, Smiths Disco, Celebration of Light, A Day at the Races and a Big Summer Sale