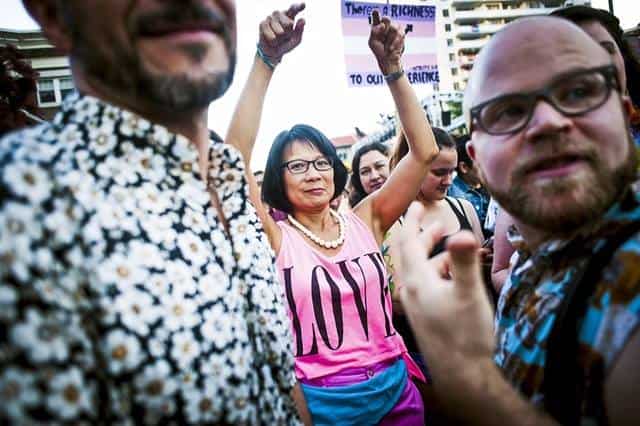 Why I Voted For Olivia Chow

Olivia Chow is a community leader

Since the Ford saga, everyone seems to be obsessed with “tax & spend” and “gravy train”. The biggest misconception is that Olivia is going to spend your hard earned money. In my opinion, I don’t think we need businessmen to run the city. We need a community leader who understands bigger social and economical investments that will bring our city to prosperity. Olivia has spent the last 30 years doing just that, by focusing on children & youth in her political career as a school board trustee, city councillor and MP.

How does investing in children & youth save you money?

EASY! Kids in after-school programs and full-day kindergarten do better in school later. This means, that kids who comes from low-income housing and difficult family situations, have a chance at better education and contributing back into the economy as an adult. Their single-mom can then work to also contribute to the economy and not depend entirely on welfare (which also saves you money). Since there is direct correlation between poverty and crime, I would rather have my tax dollars send that child to school, as opposed to paying for a criminal later in life to remain in jail. Not to mention, our streets would be safer too.

No other mayoral candidate seems to get the big picture in terms of how investing in children to break the cycle of poverty will give back to Toronto.

Ford nation brought out a really ugly side of Toronto

The strange thing about the Fords is that they feel entitled to rule this city like it’s an episode of Game of Thrones. They would definitely be the Lannisters.

In the last four years under the leadership of a Ford, a really intolerant, divisive side of Toronto that we didn’t think existed suddenly emerged. All of a sudden, it was okay to be sexist, homophobic and racist. One example is when an LGBT group attended Ford Fest to remind the mayor that they existed. Attendees ripped up and stomped on their LGBT signs and even physically roughed up peaceful protestors. See photo of a man with his hand around a protestors neck.

Toronto writer, Jonathan Goldsbie tweeted, “That was the first time I’ve ever seen a Ford event devolve into the outright bigoted hatred they’ve always seemed capable of.” You would never imagine this kind of thing happening in Toronto – a city that has always prided itself on being queer friendly and accepting. What happened to us?

This imaginary “Us v.s Them” attitude the Fords have fabricated has become toxic. Having a leader that gets away with being a bigot, has given other bigots a voice. Like the time openly gay councilor, Krystin Wong-Tam received hate mail signed by “Ford Nation”.

John Tory was the former leader of the Conservative Party and former CEO of Rogers…do I trust this guy? NOPE!

A businessman like Tory who has a “proven track record” also means our city could be run like…Rogers? Is that terrifying to anyone else? Can anyone say that they trust Rogers when it come to saving them money, or that Rogers has their best interest in mind. Who doesn’t want to scream and pull their hair out when thinking about their last Rogers experience? They are definitely not about enhancing services to make it easier for the customer by any means. Sure, Tory may save you a buck, but at what cost? Toronto is much more than just a business (though yes, that is important as a metropolitan city), and we are more than mere taxpayers. We are actually real people who live and breathe. Some of us may not be so privileged and need a mayor who understands how to build a community that will benefit the economy as a whole and for the long-run.

John Tory may talk a good talk, but he is still a raging Conservative, with the same political agenda as the Fords. If you are still thinking about strategic voting, remember that this was the former leader of the Conservative Party and his core beliefs will affect the lives of Torontonians for years to come.

That’s why I hope to wake up in Olivia Chow’s Toronto – a place that is inclusive, educated and bustling with culture. Unlike the behaviour we have seen from Ford Nation, and unlike the Conservative agenda we see with Tory, Toronto could finally be growing in the right direction. Olivia has been working hard for your vote for the last 30 years, and in my opinion, she deserves it.