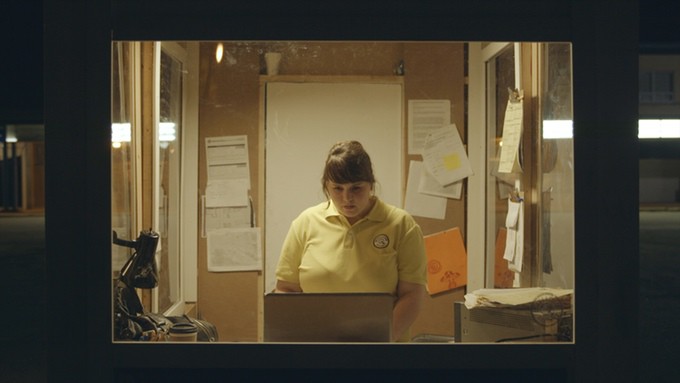 Joyce Wong’s first feature film, Wexford Plaza, is a brilliant little slice-of-life comedy about a female security guard named Betty. Her life is pretty lonely. Most of her friends have gone off to college, and she’s still stuck in Scarborough working as a security guard at a dilapidated strip mall. When a glimmer of hope appears after a charming bartender begins to show her kindness, an unexpected sexual encounter ends up causing both of their lives to unravel.

We chatted with Wong about the film this week.

SDTC: Did you have a mildly soul-crushing job as a teenager? Where did the inspiration for Betty’s situation come from?

JW: My best friend in high school had a part-time job working as a security guard for one of those private security firms that were hired to “secure” malls, vacant lots etc. They would send her out to patrol really sketchy areas with a taser and a flashlight and literally just drop her off on the corner and be like, “See ya in an hour!” Fortunately, she mostly only encountered teenagers having sex.

This film delves into how we make meaning of our existence. How can we find meaning in our lives?

Do you think teens have it harder now than they did twenty years ago?

I think social media is just another texture of modern life. I think it’s dangerous to fantasize about “simpler times” because it leads to misplaced nostalgia about a past that never was. An example of this would be twenty years ago: you wouldn’t have to deal with bullying on Facebook; however, twenty years ago blatant sexism and racism were more prevalent in schools and in the media. I think every generation makes the best of their situation with the resources they have. It’s in human nature to adapt.

However, I do think it’s harder now for screenwriters to write stories where the plot is based on communication problems because its so easy for people to get in touch with each other with technology. Also, the screen grammar of representing social media and texting is something that filmmakers are still trying to figure out.

What do you want people to take away from your film?

The film is about a lack of perspective. I hope that it makes people question the actions they take in their lives, the choices they make and also the way they see the world.

Wexford Plaza premieres in Torino on November 23rd. A kickstarter has been launched to help with promotion and festival submission costs. Like what you see? Back it here.