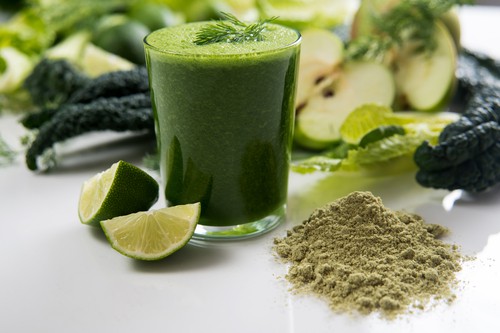 What Is Spirulina And Why Do You Need It?

Maybe you aren’t sold on this whole superfood thing, and to be honest, neither am I. I don’t think a handful of blueberries is going to save your life, and I don’t think a few spinach leaves will bring me eternal youth. What I do believe, though, is that certain foods carry an undeniable health punch. And I’ll try anything once.

It’s with that mentality that I stumbled upon spirulina. Though its flavour profile can only be described as “inner wall of fish tank”, spirulina has me hooked. At first, I was skeptical about its health promises. I wondered if a dehydrated blue-green algae could really contain more iron and protein than red meat, and up to 2000% of our daily recommended B12.

As it happens, it’s all true. The Aztecs were onto something when they began harvesting spirulina as a food source. Why haven’t you heard anything about it? It wasn’t rediscovered until the late 20th century, and we’re just now finding that it really does a body good.

Based on a daily recommended dosage of 15g (which you work up to over a few weeks), spirulina contains 114% of your daily iron. For anemics like me, this is great news. Not only is spirulina high in iron, but it’s the kind of iron your body wants to absorb; humans don’t as readily absorb elemental iron, like that in ferrous gluconate, or iron from meat sources.

Great news for vegans, spirulina contains 8g of protein in every serving. This makes spirulina a great addition to your breakfast, as it’s important to load up on protein in the morning.

If you’re addicted to creams, serums and beauty forums as much as this lonely loser, you know that Vitamin A makes the skin glow. Your daily serving of spirulina has over 500% of your Vitamin A needs.

Vitamin B12 is essential when it comes to building red blood cells, and a deficiency here can prevent your body from properly absorbing iron. Since B12 is often found in animal products, this is another area wherein vegans can seriously reap the benefits of spirulina — it contains over 2000% of your daily B12.

Spirulina has been shown to have anti-inflammatory properties, meaning it’s nice and gentle on an overworked digestive tract. In a serving of spirulina, you’ll also get eight times more chlorophyll than in a serving of spinach. What does that mean? Spirulina is great at removing toxins from your large and small intestines.

Ready to try it? Check out this Super Power Breakfast Smoothie by nutritionist Meghan Telpner.

Spirulina is also available in pill form, which is the obvious choice for anyone with a gag reflex. If you’re ready to go powder, balls-to-the-wall form on this one, a word of advice: plug your nose.

The Big Social: Host or attend a virtual food event in support of Community Food Centres Canada Posted on October 21, 2020