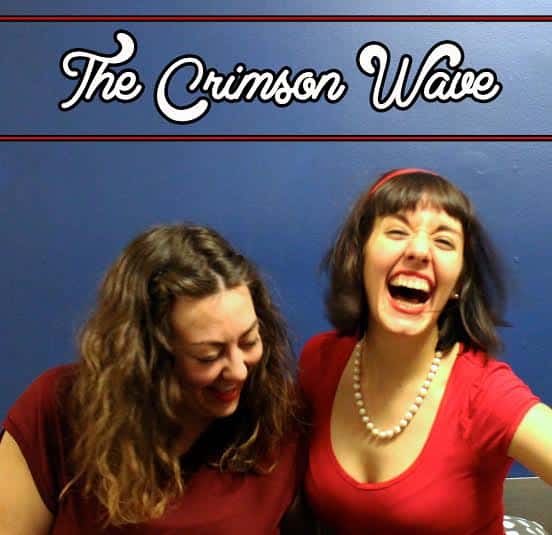 What We’ve Learned from Talking to Dozens of Women (and a few men!) About Periods

Over the past four months we’ve been talking a lot about women’s bodies and when we say a lot we mean A LOT. We co-host a weekly podcast called The Crimson Wave (thank you forever to the goddess of cinema that is Clueless for bestowing that title upon us) where our main topic of discussion is Aunt Flo, cousin red, the moon rising, having the painters in, ragtime (not the musical), clams with often red but sometimes brown sauce, bloody kitty, and shark week… if you know what we mean, and what we mean is MENSES.

Menstruation. Menstrual flow. Periods. Periods. PERIODS. Yup. We’ve opened up the menstrual floodgates of conversation and listened to endless tales of tampons, cramping, and Jess’s hymenectomy (which she manages to somehow incorporate into every episode). We have gained extensive knowledge about periods, as well as vaginas, birth control, breasts, ovaries, hormones, pregnancy, ourselves, and each other (Natalie and Jess officially know all there is to know about the other’s reproductive system). It’s been quite an enlightening, inspiring experience recording this podcast and we would like to present to you (in hopes that you’ll read and find it as entertaining, educational, inspiring and enlightening as we do) the below intriguing information that we’ve gathered thus far about riding the cotton pony.

Women love love LOVE chatting about their cycles
Our guests were not only willing to disclose the most sordid, graphic, intimate details about their monthlies, they were wanting, nay BEGGING to. Okay, it might have been less “them begging” and more “us interrogating” but regardless they were more than happy to share their stories/theories/philosophies with our loyal listeners/fans/enemies. Yes, women from around the world are beyond thrilled to openly discuss their periods so why haven’t we heard much about them before? It’s as if females have been shamed into thinking that we can’t even mention menstruation and are now finally being given a platform to express ourselves. Huh. Interesting. For some reason the words “patriarchy” and “censorship” and “misogyny” and “sexism” come to mind. Don’t know why! No idea why!

Every BODY is different
SURPRISE! WE AREN’T EXACTLY THE SAME. WE’RE NOT CLONES. THIS ISN’T ORPHAN BLACK. ALTHOUGH WHO WOULDN’T WANT TO LOOK IDENTICAL TO TATIANA MASLANY? Getting off topic a bit here (Tatiana Maslany tends to have that effect on us) but it’s true. We all function in highly diverse ways and that functioning does apply to the female baby making organs too. Some ladies have a heavy flow. Some have a light one. Some don’t have one at all! Some get cramps. Some get breast tenderness. Some get neither. Some diarrhea. Some use diarrhea as a verb (see previous sentence). Some diarrhea because they eat loads and loads of cake to cope with their menstrual related emotional distress (the “some” in this instance is Natalie). Basically we’re all snowflakes who bleed… non-traditionally… like flowers…. we’re unique… and like… really.. beautiful… as we are. If you were wondering, we both studied poetry in university.

There is a plethora of feminine hygiene care products in the world today
Tampons. Pads. Menstrual cups. Sponge tampons. Organic tampons. Reusable pads. Plain toilet paper. Nothing (a system that Natalie often chooses). You name it. A woman is using it. Methods of contraception vary greatly as well. The birth control pill. Condoms. IUDs. NuvaRings. Patches. Pulling out. The rhythm method. Abstinence (a system that Jess does not choose but uses far too often).

Having sex on the bleeds is way more common than we thought
“Let’s talk about sex, baby. Let’s talk about you and me (and your period and us doing the sex on your period),” basically. When we want to get down and move it all around it doesn’t seem to matter if we’re bleeding or not. Some women even feel more aroused and have a mightier libido when their crimson waves are a flowing. For our heterosexual female guests, their male partners seem to recognize that menstruation is a healthy and normal function of the female body and do not find it revolting in the least. When two people are in a loving and consensual relationship and care about one another nothing can stop them from making sweet, sweet whoopie… on a towel, not on white sheets that were just washed, or like, in the shower… ’cause we’re horny not stupid.

Not every first period is a traumatic experience
Not every girl’s first is a scene straight out of the movie Carrie. In fact, some of our guests couldn’t even recall where or when it happened because it was that unmemorable. For a lot of them it was rather ordinary and often happened at home, school, summer camp, or a momentous dance recital (which did involve it’s own level of trauma – have a listen to episode 6 to hear said trauma). Fortunately for our guests, most were advised by their mothers, sisters, grandmas, friends, teachers, camp counsellors and even a few dads who guided their daughters into womanhood as best they could.

Menstruation doesn’t have a strong presence in the media
Speaking of Carrie… everyone on our podcast talks about Carrie. It’s the number one go-to for our guests and other than a few random episodes of Ready or Not or Game of Thrones, and a brief scene in Mean Girls, let’s just say that “the bleeds” isn’t starring in any Blockbuster movies, which is too bad because Kristin Wiig leaking through multiple pairs of granny panties would be a glorious sight to see. The more we witness it on screen or read about it in books the less taboo it’ll be to discuss it and the less shame girls will feel towards their own bodies so come on Hollywood… WE WANT STAINED GRANNY PANTIES.

Syncing up is the real deal, especially on camping trips
Like N*Sync, our cycles (Jess and Natalie’s) started touring in the same boy band ages ago. Jess’s period is Justin Timberlake in this metaphor and Natalie’s period is the other four. It started around the time that we began recording the podcast since we were suddenly together every week (actually it happened way before that ‘cause we hang out together A LOT (like too much) but WHO CARES WE LOVE EACH OTHER 4EVA BFF 4EVA). The following important lyrics best represent our periods’ relationship to each other: “It’s tearin’ up my heart when I’m with you but when we are apart, I feel it too. And no matter what I do, I feel the pain, with or without you” and our guests feel it too with their BFFs (especially on camping trips—listen to episode 17 for more on this).

We’ve all leaked somewhere
Every guest has a leaking story, including our male ones. But no one has leaked more than our hosts, and by hosts we mean Natalie. Some places Natalie has leaked include: friends’ cars, in friends’ sweatpants, many restaurants, on a lawn, on lawn chairs, and on Jess’s bed. Leaking is common and nothing to be ashamed of. It’s a part of a woman’s life and a stepping stone in finding the right feminine care product for your particular flow. It’s trial and error with this stuff and you might need to change your pad or tampons or empty that menstrual cup more regularly than you thought and now you know. So what if it took a few lawn chairs to figure it out?

Want to hear more about the above leakages and other vital life information? Listen to The Crimson Wave’s new episode every week! You can subscribe/tune in right here.