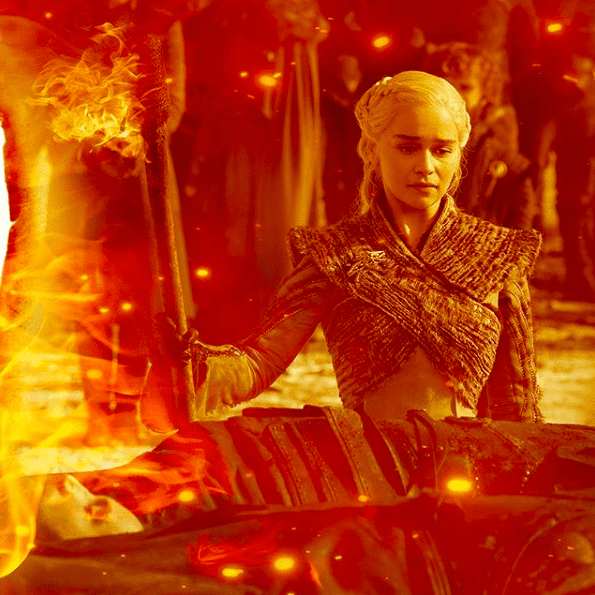 The way I feel about Game of Thrones is similar to the way I felt about my university boyfriend: it’s complicated. As a thirty-something-year-old feminist who practically has a PhD in watching problematic TV, Game of Thrones presents a perfect case study: the past eight seasons illustrate how strong female characters alone can’t produce a feminist text. For me, Game of Thrones will go down as a hate-watch of a show that seemingly hates women.

I’ve weathered eight seasons in Westeros, and I get why Dany went rogue in the penultimate episode. After being repeatedly raped as a child bride, then devoting years to freeing enslaved peoples, the lords still wouldn’t recognize her claim to the Iron Throne as they went into battle with Cersei. It begs the question: what the hell did Khaleesi have to do to earn their respect?

Our Khaleesi lived in a patriarchal society that traumatized her with a spectrum of sexist experiences and ultimately sentenced her to death at the hands of her own lover. Why? Because a bunch of men with innocent blood on their hands were scared of a woman they could not control.

Now, I won’t defend Daenarys’s decision to burn King’s Landing to the ground, but it’s interesting how patriarchy loves to mess up women, then punish us for being messed up. That Dany’s life ended in an act of intimate partner violence that was built as a “necessary evil” is an example of how patriarchy loves to attack women’s bodies, then justify it as “for the greater good” (cough, the Alabama abortion ban). Personally, I get why a victim of sexism and sexual violence may have wanted to watch the world burn. After all, it’s a world that was mostly cruel to her.

As a pop culture-obsessed feminist, I’ll concede Thrones provided viewers with a variety of female characters to root for at various points (it even occasionally passed the Bechdel Test). But for every “go girl“ moment the series gave us (like Sansa getting crowned Queen of the North or Arya being the only warrior strong enough to kill the Night King) there’s a truly sexist sequence. Take, for example, that no one even considered crowning Sansa or Arya monarch of the Seven Kingdoms. I’m sure Brandon Stark will make a decent king, but his sisters were at least equally qualified.

An even more horrifying example of misogyny in Game of Thrones was how Missandei, the show’s one major female character of colour, met her end. The translator was publicly beheaded as a means of enraging Dany and her boyfriend Grey Worm to go for broke and sack the hell out of King’s Landing. When Cersei had her executed, the show turned Missandei into a tragic prop. Later, the series ended with the Unsullied (the Grey Worm’s talented army of colour) literally getting on a ship and sailing for exile. Apparently, only white people will be allowed to live in post-war Westeros.

After consuming the final season, I am more certain than ever that when it comes to feminism, this show misses its mark. Simply put, it has no empathy for women’s suffering. The writers murder their queen for being “mad” without much consideration about why she might be so angry after a lifetime of mistreatment. Instead, Game of Thrones suggests worthy women react to sexual abuse the way Sansa did, arguing that her history of rape and abduction were beneficial, because she wasn’t a naïve “little bird” anymore. After putting a sunny spin on her suffering, Sansa was rewarded with the title of Queen of the North. By contrast, Dany got stabbed while kissing her boyfriend.

The feminist legacy of Game of Thrones is one of missed opportunity; this series could have been about how a bunch of exceptional women beat the patriarchy and fixed Westeros. Instead, it told us only well-behaved women deserve to be queen. No wonder Arya Stark got on a boat and sailed away from Westeros!