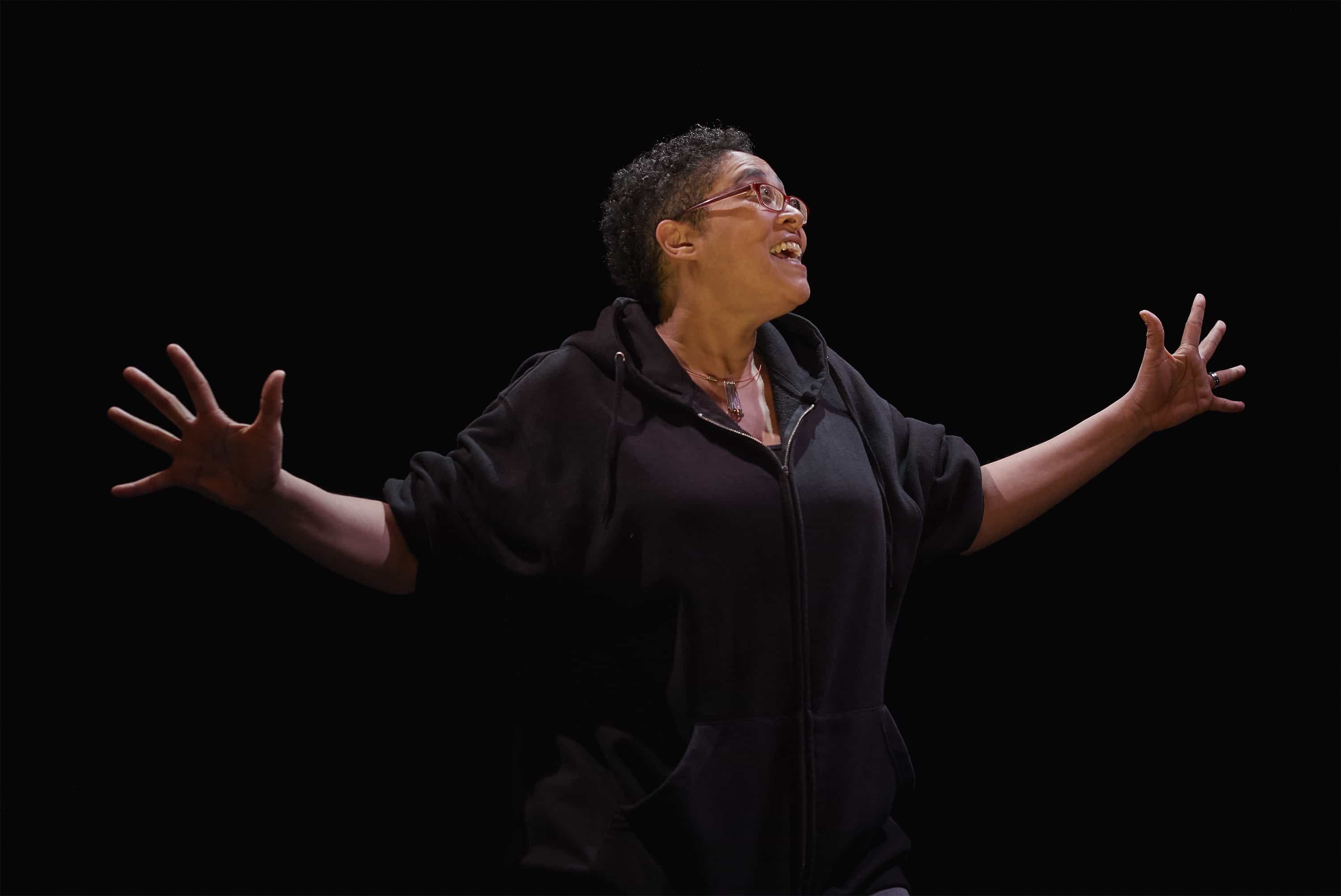 Why Freedom of Speech Can Be Scary: In Conversation with DM St. Bernard

Theatre Paisse Muraille’s resident emcee DM St. Bernard is a woman with a mission. A mission to ask the questions people are too afraid to, find the truth that others hide and create in the world what doesn’t exist.

A multi-hyphenate talent with multiple awards and accolades under her belt, including a previous nomination for a Governer General’s award, DM’s work has tackled social issues, helped shape other’s visions and inspired young people to work to change the world.

While so many artists sit around waiting for inspiration to strike (j’accuse myself) DM’s response to when it is time to create new art is, “It’s always time.”

In conversation, like in her work, DM is brilliant, funny and always seeking the truth. Not a word seems wasted and speaking to her is like meeting a scientist or a detective of human nature. Imagine if Sherlock Holmes was actually delightful.

Her most recent work, Sound of the Beast, is at Theatre Passe Muraille until May 7th. The show is a long-form narrative spoken word/hip-hop hybrid performance inspired by Tunisian hip-hop emcee Weld-El 15, who was jailed for his song, “Boulicia Kleb (The Police Are Dogs).”

So what inspired her to tackle this topic, and why this way? For DM, writing is like solving a mystery. It starts from a question to which she wants an answer. “I can see that people in the world understand things better than I do. There are a few different approaches. Sometimes I think if I were that guy I’d understand it, so I’ll be that guy for a little while and write from him. It’s either how does this work, or why is this happening, how can people do that?”

Unsurprisingly, this type of work takes a creator to some strange and uncomfortable places and forces them to deal with some very difficult and ugly issues, sometimes from the eyes of someone who has oppressed them. This kind of tension is something that DM actively searches for in her work. Allowing her to dig deep into what “the truth” and “goodness” are for different people. She writes from the premise “no one is a villain to themselves. Everyone thinks they are doing things for a good reason. So what reason could that person possibly have told themselves?”

As someone who grew up super WASPy, this kind of truth seeking sounds terrifying. Especially in a world that can feel increasingly like it is made up solely of people shrieking at each other through a faceless online void.

In fact, it’s DM’s very willingness to say the thing that others won’t, not just online but to people’s faces that is one of the things that makes her so incredible. It’s easy to post an article online about police abuses, wag your finger and yell at a stranger (j’accuse myself again) when you don’t have to interact with the person you are all caps-ing at in person.

Is she ever worried about saying the wrong thing at the wrong time? “One thing that I’ve come to understand is that you have to talk about things that affect people the same way if they’re in the room and if they’re not, because you don’t know who’s in the room.”

“This show is not necessarily the most laudatory of law enforcement and every night I have to assume if a police officer is not in the room, his mother is and I have to do the show assuming that. I think we should always assume that. Assume who you’re talking about, who is affected by what you’re talking about is in the room. Do you still have the courage to say what you need to say? Would you talk about them like this to their face?”

This combination of boldness and sensitivity is reflected in all of her art and is inspired by the work of fellow artists such as playwright Yvette Nolan and Turtle Gals Performance Ensemble. “Their shows are about really heavy things and they’re hilarious. The first time I saw Scrubbing Project by Turtle Gals I asked Yvette, ‘You’re allowed to do that?’ She told me, ‘You’re allowed to do whatever you want,” and that’s how I want to live.”

“The desire to not talk about things makes me uncomfortable. Have whatever opinion you want. But to say, ‘We’re not going to talk about this because I’d rather preserve what I already think,’ that is so uncomfortable.” Like many of us, DM is tired of jokes on uncomfortable subjects made solely to shock; however, a smart, well-written joke that reveals truths to the audience is something very different. For her, those kinds of jokes are essential to both art and life. “I have to laugh because that’s my life every day. I’m sorry if it’s uncomfortable for you because you had to hear it once.”

Her willingness to face the kind of heavy topics she does regularly would be more than many people think they can deal with. But facing difficult questions has been a force for good in DM’s life. “Often at the end of creating, I have less despair. Because I believe a solution is possible even if I don’t fully understand what it is.”

Sound of the Beast is at Theatre Passe Muraille until May 7th. Check it out and be inspired to ask the important questions in your life.