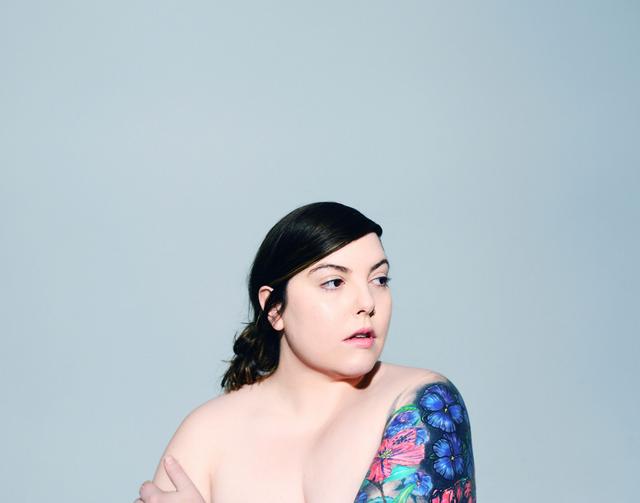 Mary Lambert isn’t your typical pop artist. Inspired by confessional folk singers as well as spoken-word performers, she is a brutally candid writer who deals directly with her past traumas in her art. Lambert was raised in an abusive home, attempted suicide at seventeen, turned to drugs and alcohol before being diagnosed with bipolar disorder, and survived multiple sexual assaults throughout her childhood. With a list of horrors, you wouldn’t expect Mary to be disarmingly joyful, but she charms effortlessly, and the effect on her audience is bewitching.

ML: My dream vacation requires having enough time to see everything I want! I would love to visit Lisbon and spend the evenings drinking port and dancing. If I’m staying low-key, I’d love to rent a camper trailer and drive to the Ozarks with my partner and dog for a week! I love finding swimming holes and would love to find the best ones in Arkansas.

My next album, Grief Creature, has taken five years to make, and in about four months, I’ll finally be releasing it! It is my life’s seventeen-track masterpiece; I self-produced this record, and I’m scared shitless about how it will be received, but I couldn’t be more proud of how it sounds.

I know this is esoteric and maybe not applicable to many people, but I read a widely cited research study about bipolar people dating each other, as opposed to only dating their opposite (supposedly, the “stable”) partner. The study said that partners who were both bipolar actually had longer, healthier marriages in comparison to partnerships with opposite neurological people.

I was diagnosed with bipolar disorder fifteen years ago, and in those fifteen years, I had never dated someone else who was bipolar. It’s can be a really isolating mental disorder, and I can’t tell you how incredible it is to be so understood and matched in every aspect. I don’t feel alone anymore. I don’t feel weird or wrong or shameful or bad. Obviously, it requires patience and grace with each other, but after you’ve been in therapy for most of your life, you get pretty good at sharing your feelings! And two people with similar experiences utilizing decades of therapist-learned communication skills, is actually kind of fun.

I was born without a sense of smell! I’m great company and I probably smell bad!

I feel wildly embarrassed to admit this, but I only just discovered RuPaul’s Drag Race, and of course, it’s all I can think about. I think it’s so incredibly powerful and emotional and artistic and important to the queer community. I had only seen drag a few times in my life before watching the show, but I don’t think I actually understood this massive part of queer culture, and I feel like I’m getting a real education!

I was once told by big dogs at my former record label that it didn’t matter whether or not I wrote my own songs or played the piano or had any hand in the music writing process. I was told I needed straight, white, male producers to be taken seriously in the industry, and that to self-produce my own music would absolutely kill my career.

This Summer, I want to start writing my second book. My first book (Shame Is an Ocean I Swim Across) was a collection of poems I’m very proud of, but I have been wanting to write a more non-fiction style book as a gentle guide with how to love your body, how to have healthy relationships, and how to live your best life while being a serious work in progress. People don’t have to have all the answers while they’re still trying to figure out how to unlearn childhood; it would be insane to expect them to!

My parents are radically generous. Generous with their time, their money, and their energy. I think this quality is what I love most about them, and also worry about with them. Over the course of my adolescence to now, my parents have taken in and cared for almost twenty people: family members, family friends, boyfriends, friends of friends. They have chickens, three dogs, and five cats and still manage hectic work schedules (and also somehow still post on Facebook every three hours?). This part of them that I love so much and admire is also sometimes difficult to grow up with, oftentimes because boundaries are much more difficult to establish as a parent under those circumstances.

I would say, “Give yourself the opportunity to not be right for someone else. Take every audition. Agree to every tour. Greet every single career opportunity with possibility and enthusiasm.”

On forgiveness and patience with myself and others: “Everybody is doing the best they can, with the faculties they have at the time.”

“Do not assign to malice which can adequately be explained by negligence or ignorance.”

The most courageous thing I’ve done was talk about my trauma openly.

I crack up every time I think about when my mom asked me what I wanted to be when I grew up, and I just got wide-eyed, as if I’d never thought of the concept and then whispered, overwhelmed by the thought of it, “SPACE.”

I would love to build a heated himalayan salt room in my house. Wouldn’t that just be absolutely ridiculous, but also INCREDIBLE? Just cover all the sand in thick sheets and play ocean sounds with low light?

As an independent artist and someone that works mostly from home, I have a really hard time creating a schedule for myself. Any time I [set] hard and fast restrictions or hourly,  organized timelines, I fail miserably. I start feeling really bad for myself!

I love high-waisted jeans with a T-shirt or crop top, and sunglasses.