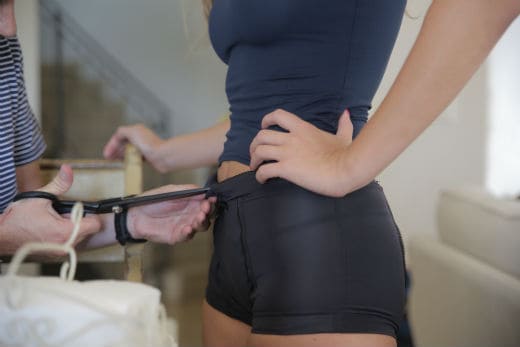 "My sexual security should come from living in a society that teaches people not to rape, not one that suggests I wear tear-resistant underwear and hope it doesn’t happen."

Why I won’t be supporting AR Wear, the “anti-rape” underwear company

When I first left home for university my dad suggested I get a “safety” whistle and a take self defence course. More out of laziness than dissent, I did neither, though I now balk at the advice. At the time, however, I agreed with him: it was important to do everything I could to protect myself from would-be assailants. And there would be assailants; I was definitely going to be attacked. I’d watched full seasons of Law & Order: SVU and read enough stats to assume that it was inevitable, that I needed to take precautions to protect myself. It seemed normal to be afraid, just another part of being a woman, my burden to bear because I had both breasts and night classes on the other side of campus. Walking alone at night I’d plug 9-1-1 into my phone and keep the ‘send’ button close by or carry my keys between my knuckles like I’d been told to do in high school.

I imagine many of you have done similar things. When 70% of all women are likely to experience physical or sexual violence from men in their lifetimes, it’s the reality of our day-to-day. It’s also the way most people have come to conceptualize sexual assault prevention. Ever Mainard has a stand up routine that pokes fun at it: “Every woman has that one moment like, “Well. Here’s my rape. This is it. Heeeeere’s my rape!” Mainard’s routine is controversial, but her jokes hinge on an unlikely power reversal between assailant and victim and shed light on the ingrained way that we think about violence against women.

In the summer of 2008 a string of connected assaults took place in the neighbourhood where I lived. One night a friend found a man climbing inside her basement window. The city was afraid and I grew resentful. I was annoyed when people suggested I use our campus Safe Walk program—why should I change my route home? Why did I need protection? Why was it my responsibility to avoid rape? My gender meant I wasn’t able to walk alone at night without fear and it wasn’t fair.

Instead of accepting the protect-yourself-to-stop-rape status quo, I emailed the Garneau Sisterhood, an ad hoc anti-rape organization. They created a poster campaign combating common rape myths and demanded the rapist turn himself in. He didn’t, and to my knowledge still hasn’t, but I felt far more empowered working with them then I had before. It was my first introduction to the notion of rape culture, and the beginning of a larger discussion that is now in full swing in mainstream media. The push to redefine rape prevention by focusing on perpetrators rather than their targets has grown significantly since then.

So that’s why I’m frustrated when I hear about things like this Indiegogo campaign to fund AR Wear, an ‘“anti-rape” underwear company. Why are they wasting resources on more victim-focused rape prevention? There has been major backlash against the “protective” garment ,which promises to offer “protection when things go wrong.” In addition to being a trivializing slogan, this kind of “protection” is an example of unwitting victim-blaming. Anti-rape devices promote a sense of perpetual potential victimhood in women and draw attention away from the real issues surrounding rape. They also ignore the fact that the majority of assault is committed by someone known by the victim. I look at this “anti-rape” underwear and wonder about women in abusive relationships: how could the garments actually help the people who are most likely to be assaulted? Instead of arming women with a glorified chastity belt and fear of dark alleys, we should be providing information on abusive relationships and consent to both sexes.

Obviously, not unlike my dad, the producers behind these contraptions want me to stay safe. It isn’t their intent to shift responsibility and victim-blame, and they try to acknowledge this: “Only by raising awareness and education, as well as bringing rapists to justice, can we all hope to eventually accomplish the goal of eliminating rape as a threat to both women and men. Meanwhile, as long as sexual predators continue to populate our world, AR Wear would like to provide products to women and girls that will offer better protection against some attempted rapes while the work of changing society’s rape culture moves forward.”

But while the fear that followed me down empty streets ten years ago remains and I find myself asking the same questions—Can I run in these heels? If I wear headphones, will I hear someone approach?—I will not wear these undergarments or support their production. I will instinctively try to avoid dangerous situations—I wear a bicycle helmet because I’m afraid of accidents, not because I think someone is going to deliberately run me over—but I refuse to take on more responsibility. My sexual security should come from living in a society that teaches people not to rape, not one that suggests I wear tear-resistant underwear and hope it doesn’t happen.