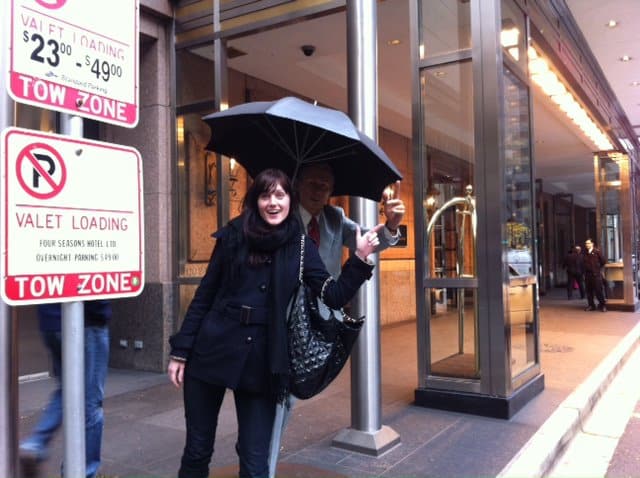 Why We All Matter, Damnit!

The other week, I was watching a tribute to the great career of Barbara Walters. You know, “Baba Wawa,” the first female co-host of any of newscast or lifestyle show, the first female co-anchor of any network evening newscast, the woman who’s interviewed everyone from the Shah of Iran to Monica Lewinsky.

As I was watching her amazing career unfold (along with admiring her killer 80something legs), I immediately felt very small. Insignificant. That what I was doing with my life—blogging about small tits and being sick while attempting to write a sitcom pilot—was vapid, silly, and mostly, just unimportant.

Humans (and not just the American kind) think big and dream big. I know I do.

Ever since I was a child, I believed I had a Universe/Zuul/God/Source-given purpose in this life. I mean, I think we, the residents of this Earth, all do. I think that’s the point of this thing called life.

But I also thought that in order to feel that I truly mattered, that I was really making the use of this purpose (which, in my case, I’m pretty sure has something to do with writing, but life is long, the days are short and who knows?) then I had to do it big. Gigantic. XXL. I had to be “all that, and a bag of chips.”

So, as I was watching the life and times of Barbara Walters, who definitely lived a large life, I was all like, “Shit! Am I wasting mine? Am I just taking up space rather than creating a place for myself?”

Feeling like going through my recent work would provide me with some answers (if, not, perhaps, boost my ego, or at least prove that I was a masochist), I scrolled through some of my recent stories. I assumed I would cringe (“Writing about BJs, Brianne? Really?” “Whining about turning 30? C’mon!”), but as I came upon the comment sections of some of my stories, I felt the opposite—I felt warm and tingly. I realized that what I was doing with my life—writing, sharing my life stories—meant something to someone at some time.

“I really needed to read this!” “Thanks for writing this!” “Love this!” “Where did you take the BJ workshop?”

These remarks, and others, are all indicators that what I’m writing and creating, basically how I’m living my life, is important. It might not be world-changing, trailblazing, Barbara Walter-living (yet), but it’s significant. It matters. I matter. You matter. We all matter.
The little things in life are often overlooked, but a willingness to share and connect with others, and live authentically, can make a huge difference.

If you ever experience, an “Oh, shit! I’m not doing enough with my life” moment like me, here are a few tips to help you get your head right.

1. Write/Share/Create what you know/love/whatever is important to you. Vulnerability mixed with passion is powerful stuff. It’s contagious. Vulnerability brings peace and hope to people who might think they are alone in their struggles and insecurities, while passion invigorates and inspires. Sharing who you are and what you love connects you with other people, and there’s nothing more powerful than that—no matter what the subject (even BJs!).

2. Stop Comparing Yourself to Others. This will save you a lot of pain and suffering and incompleteness. It doesn’t matter if your high school best friend had tons of babies or that your college roommate is the next Oprah. What matters is what you’re doing. There is no such thing as “not enough.” You are enough. This includes paying no mind to the haters, also. As much as I’ve had my share of positive comments from readers, I’ve had my negative comments too (“You’re a terrible writer!” “Stupid article!”). Listening to people consumed by haterade, or who are just incapable of providing constructive criticism, is a waste of time. Send them good thoughts/vibes, and continue on your way.

3. Remember You Are Unique. Stanislavski once said, “There are no small parts, just small actors.” We are all here on this planet to do something and to be someone. A chef, a lawyer, a botanist, a mother. Whatever. There is no one else out there (not even in Sweden or Japan) who is quite like you, so do it up, sister! You might not win an Oscar or a Nobel Peace Prize one day, but you can make a huge difference in someone else’s life—most importantly, yours—if you stay open, stay curious, stay kind, and always, stay you.