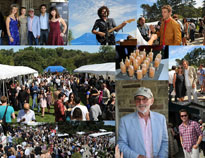 With 1500 guests sprawled on the Bayview estate, the CFC Annual BBQ felt like a free lovin' music fest. But with Louboutins not Chucks.

It was a perfect day for the Canadian Film Centre’s Annual BBQ and 1500 industry types arrived to wreck the sprawling green lawn on Bayview with ludicrous three-inch heels, us included. With buttery corn on the cob, countless Ray-Ban Wayfarers and a well positioned stage on a field, it felt like a dreamy summer music fest. Especially so when we hung out near the portable toilets.

The Midway State’s Nathan Ferraro belted out tunes as well dressed ladies squirted mustard on their burgers and eagerly tossed their name in for a shopping spree at Holt Renfrew. Weeee! While film distributors and publicists swirled around Norman Jewison, we spotted other Toronto notables like author Claudia Dey and designer Bruno Billio. Sipping from pink straws dunked in Evian bottles and maneuvering our way around the white tents, it was an ideal way to come down from late night TIFFings. The only real distinguishing difference from a music festival was that instead of exiting like cattle into a crowded TTC shuttle, we slipped into a Cadillac Escalade and were chauffeured away in ultimate class, which can’t be said for the dude exiting in an pimped up Land Rover with license plate, “DADDIOH”.