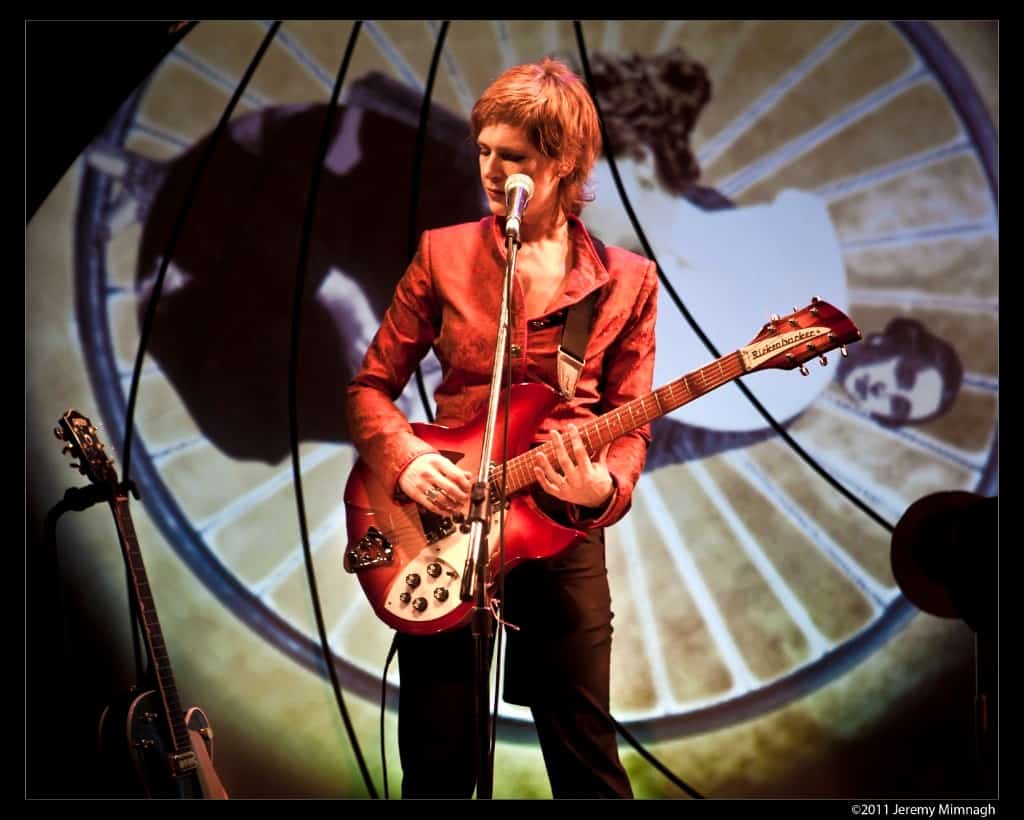 Women, Bicycles & the Power of Mobility: In Conversation with SPIN Creator Evalyn Parry

SPIN is coming to the St. Lawrence Centre on May 8. Whether you’re an avid cyclist, a history buff, or simply an admirer of one-of-a-kind theatre, you’re going to want to check this one out!

Part women’s history lesson and part musical performance, SPIN was created by award-winning Toronto theatre artist and songwriter Evalyn Parry, who was inspired by the story of Annie Londonderry, the first woman to ride around the world on a bicycle in 1895. In SPIN, Parry spins a web of stories that span nineteenth-century emancipation all the way to twenty-first-century consumer culture. Did we mention that the co-star of SPIN is a vintage bicycle that is suspended on stage and used as a percussion instrument? Yeah, you’re going to want to check this one out!

We caught up with Parry to learn more about the show.

SDTC: How has women’s liberation been linked with the advent of the bicycle?

EP: That was exactly what I set out to research when I began creating SPIN. What I discovered was a bunch of surprising connections. In the 1890s, when the bicycle as we know it was first invented, it was a totally unprecedented and revolutionary technology: a personal mobility device powered by the rider. It gave people access to a new kind of personal freedom and mobility. For women at that time, that freedom was meaningful both literally and symbolically.

In the 1890s the women’s emancipation movement was also gathering momentum (organizing around women’s right to vote). The bicycle was embraced by some early feminist leaders at this time and was heralded as a way for women to experience a kind of physical liberation: the sensation of moving “under your own steam” as well as the possibility of travelling independently and autonomously. Early female riders became symbols for a “new,” independent, self-possessed kind of woman.

Fashions of the 1890s in the Western world had women wearing corsets, floor-length dresses and layers of petticoats (pretty cumbersome attire for cycling and unimaginable by today’s cycling standards). As cycling became more and more fashionable, and more and more women began to ride, women’s riding “costumes” started to reflect and adapt to this new freedom. Early adopters began scandalizing society by shortening their skirts, and wearing long baggy bloomers (basically like a long divided skirt), eventually paving the way for women to wear pants (again, a literal symbol of women’s liberation).

In your research for this performance, what did you uncover that was particularly interesting/provocative?

I feel like the whole show is my answer to that question. I uncovered so many fascinating stories and connections in my research, and those stories are literally what the SPIN is made of.

The story of Annie Londonderry, the first woman to ride around the world on a bicycle in 1895, became the kind of keystone of the show. Annie’s story, which is still not very widely known but was even less known at the time that I started researching this material ten years ago, literally stopped me in my tracks when I discovered it. I couldn’t believe a woman had done what she did at the time she did it—it seemed so impossible—and it changed my perspective on history.

The show tells a series of little-known stories from history that have amazing resonance today: a reclaiming and celebration of some incredible (and not well known) cycling heroines, and of the history of a machine that was once—and for me (and many others!) still is—the ultimate symbol of freedom. 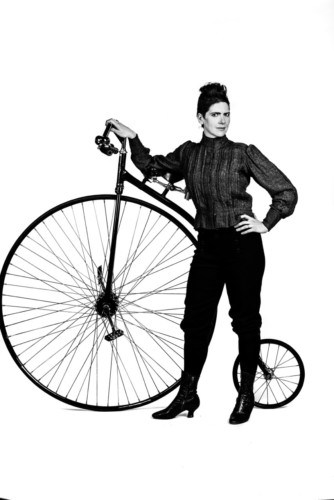 Tell us more about Annie Londonderry. What was she like as a person? How has her legacy shaped the history of the bicycle?

She was a complicated and fascinating person, and her story is a reflection of that. I think you really have to come to the show to hear about this, or you can start by listening to the song from the album. Here’s the link.

She was, by all accounts, an incredibly compelling storyteller and a good salesperson, and I think perhaps she really wanted to be famous more than anything else, and this trip around the world by bicycle was a way to achieve that. One of the ways she managed to do the trip was by selling advertising space on her bike and on her clothing, so she became a literal travelling billboard and probably the earliest known example of women and sports endorsement.

What were the challenges in playing this role? What do you love about it?

I love telling Annie’s story and watching audience’s experiences for the first time. I witness people reacting in the same ways that I did when I first encountered it, with this mix of disbelief and delight and amazement.

I really perform as myself in this show (plus playing little cameos of all the historical characters that are introduced throughout). The characters appear as part of the storytelling convention, but in the show I spend more time speaking about Annie than I do speaking as her.

So, the challenge is this production has been less about “acting” and more about how to effectively put a bunch of stories and ideas and performance conventions together to create something creatively cohesive.

What is your earliest memory of riding a bicycle?

I think I was around four years old. I clearly remember the day my dad let go of the back of my bike and suddenly I was riding on my own without realizing it. The magic and euphoria of that first taste of independence and autonomy on a bike.

Beyond being a means of transportation, the bicycle seems to represent something—or holds a special meaning—in our collective unconscious. Why do you think that is?

Creating SPIN was motivated by exactly that question. And I hope that the show succeeds in illuminates something about “why.” To me, it’s not a singular answer.

The historical research—going back to the time when the bike was first invented, when it first captured people’s imagination and gave them a brand new experience of moving through space—helped me understand that the feeling we cyclists have today is essentially the same: a feeling of self-propelled freedom that really is like nothing else. The endorphins of exercise plus the exhilaration of speed: for me, riding my bike makes me feel ALIVE.

And I love how the bike carries with it this resonance of those early feminists fighting for an equal place in society. It recalls a time that was slower and more human in speed, a time before cars, before world wars, before the twentieth century. Today, bicycles also resonate with environmental concern and climate change: it’s a vehicle that doesn’t pollute, that doesn’t cause gridlock, that makes you feel good and doesn’t harm the planet. It’s a means of transportation that’s both deeply personal and also fundamentally political, and it makes the connection between those two things.

I always hope that audiences will go away inspired. One of my favourite reactions is when people tell me the show has inspired them to get back on their bike.

I’m always excited for audiences to be introduced to these heroines and adventurers from the nineteenth century. The show pays homage to some historical figures who should be more widely known and celebrated: women who broke rules and pioneered in ways that blazed trails for future generations of female and non-conforming folks.

Also, I love that people often tell us that after seeing Brad Hart play the bike as a musical instrument, they will never look at their bike in the same way. The sounds that he produces on it are surprising and magical.