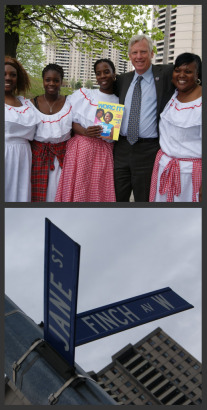 Normally, it takes some serious coaxing to drag me anywhere this North of Bloor before 11 a.m. on a Saturday, but last weekend I did it freely, (even enthusiastically) for Jane’s Walk – “Jane and Finch From Young Women’s Eyes.”

No stranger to a disproportionate amount of criminal activity, malnourished youth and high unemployment numbers, the Jane and Finch neighbourhood hasn’t exactly acquired a chic reputation throughout the years. Rather, dubious stereotypes abound surrounding the locale. I begin my journey with a open mind and am greeted by Mayor David Miller, (and foreboding rainclouds) at 10:30 a.m. sharp.

Guided by 7 lovely ladies from WORC IT (Women of Race Climbing It Together), I learn that the Jane and Finch area was originally developed in response to a massive increase in population from 1961 – 1971. During this time, the number of residents – pouring in from all around the world – sprang from 1300 to 33 000. Yet, what I’m most astonished to learn throughout the walk is how much the neighbourhood truly has going for it – thanks to its passionate inhabitants who are eager to show off, and cultivate, the beauty that exists in the unassuming vicinity. Back in the 60’s when the community was trying to deal with the influx of newcomers, community workers scrambled to scrounge together an infrastructure to provide security and services to the growing multicultural population. Today, the neighborhood lays claim to a bunch of grassroots organizations helping bring quality of life from zero to hero.

The Jane’s Walk is only a sample of the do-good schemes that come out of WORC IT. With a focus on creating an avenue for participation in the community, WORC IT mentors women, youth, and visible minorities. The girls responsible for the success of the group range from high school to university age, and all share some personal speculations on the sites of the ‘hood that cultivated the likes of Jully Black and Glenn Lewis back in the days of the first high waisted pants.

As we plod through the rain, they tell me that York University is just a stones throw from Jane and Finch, but the two areas are worlds apart. The Jane and Finch mall, (which is actually featured in the video for Organized Rhyme jam “Check the OR”), is testament to the cultural diversity in the area, as it transformed from a BUY WAY ten years ago to an amalgamation of Asian and African stores. As we walk further, I learn that Driftwood Ave sees the tough divide between the affluent Italian population on one side of the street and the Driftwood Community Center on the other – in which one inhabitant was forced to wait 2 years for their sink to get fixed. The two sides have virtually no interaction.

Our brigade of about 20 is occasionally held up by Mayor David Miller, who frequently stops to shake hands with people waiting for the bus or on a coffee run. He says, “in a city this big, people come up to the mayor and say what’s up. That is something about Toronto I think is great. It really says something about this city.” Miller has to leave early to chat with some skaterboys who want to set up a skate park at Lawrence Heights. Awww’s and oooh’s ensue from the group as he tells us this – it’s clear that he’s totally invested in the pursuits of people.

In an effort to reshape public discourse and clear its reputation, a new nickname was recently imposed on the Jane and Finch area – University Heights. The walking guides assure us that probably 90% of the inhabitants aren’t even aware of this, and those who are, are less than stoked about it. However, to quote Brooks and Dunn, “you can’t take the honky tonk out of the girl” – that is, no one can take the soul of the Jane and Finch crowd. The area already has the makings of a successful community. Their multicultural flavour will shine unrestrained through its imposed epithets as well as its negative reputation, and will be what really saves it. The fact that our neighbourhoods are self made is something that many really love about Toronto. With a little faith and facilitation from outreach-oriented badasses like the mayor and from the city at large, Jane and Finch can thrive.