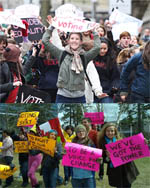 Since the beginning of the month, the Toronto Star has hosted a forum for some of Canada’s young leaders under 30 to pose daily questions concerning all election related issues. Youth Nation 2011 proves that young people are involved, interested and active in political matters, and this blog gives them a voice. It muses over important issues, skipping the political rhetoric and jargon that can sometimes be enough to put someone off reading a newspaper during election time. They’re real people, talking real politics.

This discussion has made clear that urban issues, especially the universe of public transportation (that we Torontonians deem no trifling matter) has sort of bitten the dust in the talk surrounding the upcoming federal election. With over 15 million urban voters living, working and playing in our lovely, creative and lively metropolitan areas, we occupy a crucial chunk of the population. As a report done by the Martin Prosperity Institute describes, Canada’s metropolitan areas are home to 68% of the nation’s population, 90% of our immigrants, and 96% of Canada’s visible minority population (and 67% of the eligible voters). And, incorporating probably the best metaphor I’ve ever seen in an institutional publication, the report confirms that while the suburbs might be the donut to the central city’s Timbit, without a strong central city, the suburbs would crash. (So why aren’t urban issues at the forefront? Is it because no one wants to talk about treating sewage?)

The Youth Nation all-star bloggers have made it pretty clear that they are all about strong and healthy proverbial Timbits, hence, the ton of urban related questions that have accumulated throughout April. Every weekday, a new question is posed and all the bloggers answer. Tuesday’s question was “How should federal government support municipalities in maintaining and enhancing public transit infrastructure?”

One blogger, Larissa Shasko, wrote that her daily commute to school in Regina, Saskatchewan from her home in Moose Jaw involves a mix of Greyhound buses and Saskatchewan Transit buses. In Moose Jaw, there is no bus service after 6 PM. There are also no bike lanes, and the sidewalks are crumbling. Saskatchewan is a large province with a small population, and public transit hasn’t been adequate.

Another contributor, Rebecca Harrison, writes about how she was diagnosed with Epilepsy when she was in grade 3, leaving her unable to get a driver’s license and dependent on public transportation. Municipalities can only provide this service with help, usually in the form of the Federal gas tax fund (a part of Canada’s infrastructure plan that gives every municipality in the country a portion to strengthen their infrastructure, such as water, waste, local roads and transit). The thing is though, money from this fund can get spent on other infrastructure like water treatment and waste management, meaning some municipalities are not receiving the dedicated funding they require to maintain and expand their fleets.

A blogger from the Green Party detailed the party’s hope to double current funding to stimulate a massive reinvestment in public transit infrastructure in all Canadian towns to make it reliable and accessible to low income Canadians. This includes starting up programmes to increase ridership like eco passes and U passes, tax credits for employees who make their offices at home and those who don’t use company or school parking spots, and provide free public transit passes to people living below the poverty line. Public transportation obviously has a lot to do with the environment, an area that doesn’t usually make the top priorities of the other parties.

NDP, like the Green Party, is also pledging for an additional cent of the gas tax to be dedicated to cities which could be used for public transportation. They hope to maintain and expand public transit across the country and promote it by providing a tax exemption for employee workplace-based transit passes.  The Liberal Party’s platform considers public transit infrastructure a high priority, in the interest of decreased congestion and enhanced mobility, but doesn’t include many earth shattering details. Public transportation didn’t make the Conservative Party platform’s top 5 priorities, and the small mention of it states that the gas tax fund will be made permanent.

Hopefully, the lack of attention that bike and public transit infrastructure issues have received in the federal election thus far isn’t an indicator of how much attention the essential urban topic will receive from the next government. There are only a few days left until the election, and a few days left of the Youth Nation blog. Check ‘er out while you still can to read up on what our countries most inspiring young leaders think. And whatever you do, don’t forget to vote! Note sure who to vote for? Take this handy little quiz to give you more of an idea. And go here to find your riding!

Our Pick of the Week: Toronto Bicycle Music Festival