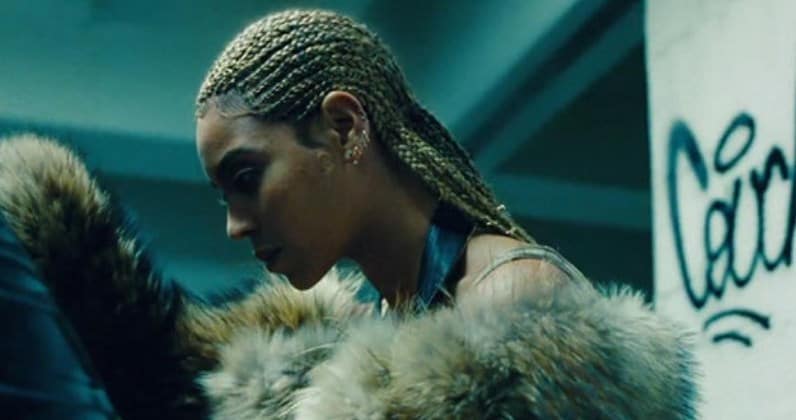 2016 has been a trash fire of a year. But ten badass bitches showed us how to bite back – their sweet tunes soothed our souls and helped us get through it all. These goddesses inspired us to push boundaries and let our voices be heard. Heads up, this list is in no particular order ‘cuz we gals gotta help each other out instead of comparing ourselves to one another.

She ain’t just Beyoncé’s sister, she’s an incredible artist in her own right. Her #1 album, A Seat At The Table is all over every best of 2016 list, and for good reason. It’s political, beautiful and each video she released to match was instantly iconic. Never mind the fact that she has slaaaaaaayed every TV appearance she made.

Girl’s music video for “Loner” (above) got taken off YouTube for being too sexual, even though there’s no nudity or sex in it. Rightfully, she pointed out all the reasons that’s totally f*cked up. You may have also caught her emotional reading of Zoe Leonard’s “I Want A Dyke For President,” which went viral this year. Mykki is hella punk and has been breaking the binaries for years now. Finally the world is catching up and you should too; her much anticipated debut album Mykki was released this past fall. Heads up Toronto, Mykki is playing the Velvet Underground February 14th with Cakes Da Killa and you’d be a fool to miss it.

She’s opened for Sleater-Kinney (on their reunion tour, no less); she’s been holding it down as a host at MTV’s Wonderland; and her Coconut Oil EP is sonically soothing and soul empowering. See also, Lizzo’s DJ (and artist in her own right) Sophia Eris who dropped a sweet self-titled album this year.

Shut up kiss her hold her tight. Angel Olsen’s new album MY WOMAN is a favourite for good reason and sinks under your skin quick. Also, her self-directed videos are so so so so good. She’s got that quiet confidence that brews like a strong storm.

The seventy-year-old living legend dropped her new album Pure & Simple (her 43rd solo studio album), did up a huge world tour and dropped another holiday special based on her life. She’s never been afraid to call the shots and remind everyone she’s the boss. Can someone take us to Dollywood? Girl is goals. Who doesn’t want their own theme park?

Mitski’s album Puberty 2 is a new classic from this artist who’s been making noise in the indie world for a while now but is now making major waves. Just watch her performance on The Late Show With Stephen Colbert. Bonus points and kudos for making her shows safe spaces after the American election’s disheartening results. Also she has t-shirts that say UNFOLLOW HIM. Hell yeah.

The forever iconic first mother of boundary breaking is still at it. Who didn’t cry during her Billboard Woman of The Year speech (above)? Amen sister. Amen.

ANTI, like hellllllloooooo?! Work?! WORK?! Whether it’s launching her 2nd FENTY x PUMA collection at Paris fashion week or leaving a restaurant with a wine glass in hand, Rihanna reminded us that the world is ours for the taking. So go take it, girl.