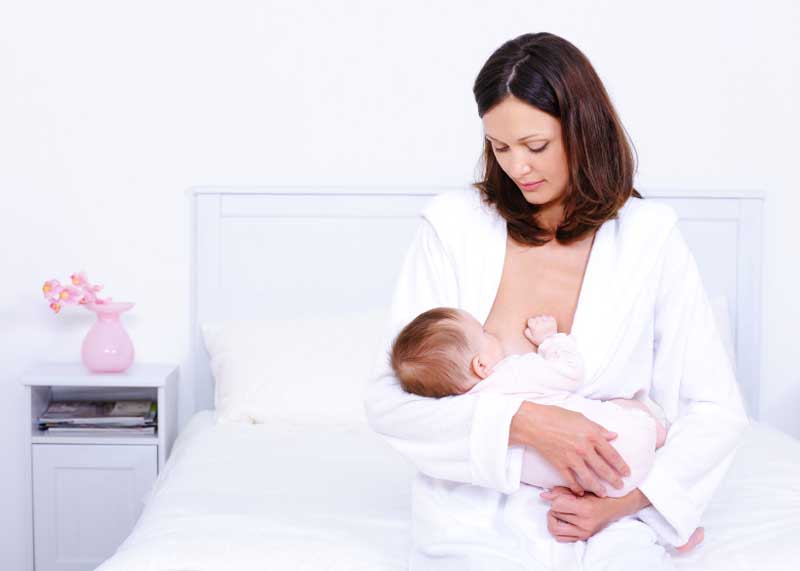 "It wasn’t about my struggle though, or my sore nipples, or my frustration—it was about my new best friend in the world, and he was hungry."

The first two days with my newborn were hell.

Those weren’t exactly the words I’d expected to come out of my mouth as a first-time mom, but from the moment my new little man laid eyes on my breasts, his reaction was to scream. I had intended to breastfeed, but just like I had planned on having my baby sleep through the night at eight-weeks-old, I was aware that things were pretty unpredictable. What I didn’t know was that the transition from breastfeeding to formula was going to be (I perceived at the time) my first failure in motherhood.

Oliver (Olly) was delivered at a downtown Manhattan hospital. After 18 hours of labor, a long pregnancy that left me 55 pounds heavier, and a whole life of waiting to be a mom, the moment had finally arrived.

In the maternity ward, the culture of breastfeeding became my new world. By the time Olly was introduced to my naked chest he was incredibly hungry, and due to my, let’s just say challenging nipples, it was as if the poor guy was trying to suck a melon through a straw. But the nurses all seemed to be of one belief system: breast is best. I knew about the general positives of breastfeeding that I had learned in classes and books, so I didn’t think they were that out of line for encouraging me.

There’s no arguing that the antibodies found in breast milk that help build a healthy immune system cannot be found in formula. I had read that breast milk can reduce the risk of cancer, obesity, respiratory problems, blood disorders and so on, so of course I was going to try to give my child the best start possible. But the nurses’ “healthy” encouragement soon become dictated instruction that left me feeling guilty for not doing such a great job.

I met with three lactation consultants, all with different strategies to get Olly sucking, and each one of them remarked on his impatience. But was he impatient or just hungry? I began to question them on why breast milk is leaps and bounds better than formula. They all had the same ambiguous look as they answered by saying, “It’s just better for your baby.” That was it—it was just “better.” So I continued blindly, pushing my two-day-old baby and myself to just be “better.”

After a day and a half of different nurses meandering in and casually giving me a purple nurple, telling me that I just had to just grin and bear it, I began to think of them as brainwashed. “My baby isn’t getting any nutrients—isn’t that bad?” I’d say. “It’s normal to lose weight in their first few days of life,” they’d respond. They all said that every new mom met challenges with breastfeeding, but that in the end the rewards always outweighed the struggle.

It wasn’t about my struggle though, or my sore nipples, or my frustration—it was about my new best friend in the world, and he was hungry. That was it. That was all that mattered.

I got the feeling from these nurses that if I were to feed him formula it would be like pouring a bottle of vodka down his throat. At that point, my determination to breastfeed was there not because of my personal belief in the benefits, but because of the social pressure I felt around me.

Towards the end of the second day, tired and defeated, I sat limply holding the back of Olly’s neck, trying to place him directly in front of my nipple. As tears gently fell down my cheek, a woman walked into the room. Olly’s back was arched and he was screaming bloody murder. The woman leaned in and said, “My baby was just as hungry when he was born and I wasn’t producing enough milk, so I supplemented with formula.” Promptly sitting up, I looked at her with starstruck eyes; someone was actually going to help me. She took a look around, like a dealer about to sell drugs, and told me that if I wanted, she’d bring me a secret stash of formula.

After I had said, “Yes!” a little too excitedly, she came back with six or seven bottles and hid them in my overnight bag. I was crying as I opened the bottle and attached the plastic nipple. I was so desperate to have my child’s belly full that my need to feel competent as a breastfeeding mother disappeared completely. As soon as Olly’s lips made contact with that pseudo boob, his eyes fluttered and rolled back blissfully into his head. The room was quiet, and I could actually hear Manhattan’s nature sounds: sirens and honking cars. It was so very peaceful.

A couple of months later, after what felt like hundreds of hours at the pump station, I eventually gave him formula full time. I knew from my pediatrician that there were discrepancies about the scientific evidence that breast milk will, for example, produce a smarter baby, or that a formula-fed baby will have a weaker immune system. The doctor looked at me, as Olly lay sleeping against my bare skin, and said, “See, there is no difference between the way you bond with your baby and all the other breastfeeding moms out there.” If Olly hadn’t been sleeping so peacefully, I would have jumped into her arms.

People who find out I quit pumping after six weeks might think I just didn’t try hard enough, or that I’m just not fully educated on the benefits of breastfeeding. But there came my first lesson in parenting: It doesn’t matter what they think. What matters is that I have a happy baby.