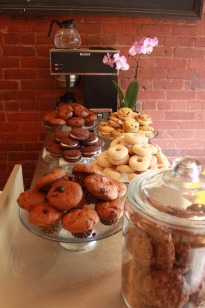 Ashley Wittig is on a mission to prove that going vegan doesn’t have to mean sacrificing flavour. Most of us know that a vegan diet is
great for your health and for the environment, and Wittig’s treats are confirming that it can also be loaded with pure and natural tasty
goodness. After people went bananas for her vegan, gluten, and soy free treats at farmers markets all summer, she and her boyfriend Kevin
MacAllister settled into their own digs in the Junction (3054 Dundas St. W.) in December 2010. People continue to spring for Bunner’s baked goods, which range from all natural cookies and cakes to muffins and bread.

What inspired your vegan and gluten free bakeshop?
I get that question a lot and it’s funny because the answer is so simple. I really like baking, and my boyfriend and I are vegan, so we
started the venture together. We did farmers markets all summer and our gluten free stuff was insanely popular. People kept calling us for
them, so when we opened the bakery we decided we wanted to do just vegan and gluten free. I didn’t go to school for baking or culinary
anything – my background is in business and I was an English major so, pretty much the opposite of being a baker.

Why did you decide to go vegan?
I went vegan for a number of reasons. I always found a vegan lifestyle alluring, even since I was a kid, I wouldn’t eat meat with a bone in
it because it freaked me out. A few years ago I was working for a company that was celebrating World Vegan Day and we watched a movie
called “Meet your Meat,” which is a pretty well known Peta propaganda movie, but it was effective. There are so many benefits of being vegan,
like any kind of weight I wanted to lose just fell off, and I felt healthier and energized. It was way easy to stick with it.

Is there a typical Bunner’s customer?
That’s a tough one; a Bunner’s customer is, I’d honestly say, generally not vegan or gluten free. We get a lot of people in the
neighbourhood, like moms that want healthy treats for their kids. During the weekdays it’s mostly regulars, on weekends it’s all new
people who have heard of us and want to check us out. People from all over the city who are curious. 10% of our clientele might actually be
vegan, maybe 20% are gluten free. Just normal peeps.

How can you make cupcakes and cookies taste good without using refined sugar and butter?!
You have to make sure all your ingredients are tasty, that’s the first thing. Some people might put flax seeds in their white cakes just
because it’s healthy, but we don’t do that. Instead of butter we use coconut oil which is rich like butter and super tasty, instead of eggs
we use applesauce, instead of milk, we use rice milk, instead of gluten, we use flour blends that are matched to what the texture of the
product needs to be. Cupcakes need to be fluffy, so chickpea flour is great for that. Cookies are more dense, so brown rice is better for
that. It’s kind of like a puzzle, tying to figure out where all the ingredients go.

And no soy! Why no soy?
When we were working on the business plan we decided we were going to be nut, wheat and dairy free. These are major allergens, and soy is
also one of the top 7 or 8 top allergens. We wanted to try to battle as many of them as we could, so we don’t use soymilk in our regular
products, we use rice milk. We do have a couple things with soy, but you can always order it without. I’m always experimenting with things
to get away from possible allergens, even like evaporated cane juice, to substitute it with agave nectar.

What are your personal favourite goodies you sell at Bunner’s?
The Supersonic Gypsy cookie (a Bunner’s family fave with oats, seeds, cranberries and chocolate chips) is the apple of my eye because it’s
one of the first products I invented years ago. It was the catalyst for the entire business. Everyone goes ballistic when they eat it.
That’s my number one fave. But it’s like choosing your favourite child! I love a vanilla cupcake, I love the donuts, and the bread is
outstanding.

What’s the most rewarding aspect?
I love seeing parents come in with their kids who might have never had the option to go to a bakery and choose anything. Their eyes light up
because they are just like “I can eat anything here!?”, if they have allergies. Some parents get emotional because their kids get to
experience something they have never before. I’ve gotten emails from people that are so touching for Kevin and I, you know, they just
congratulate us for doing this and say thank you so much. That kind of stuff is amazing for us.

Where are some of your other favourite places to get vegan treats in the city?
I love Board Walk Chocolates , a vegan chocolate company. They don’t
have a storefront, just wholesale. They sell their stuff at Panacea (588 Bloor St. W) I love Sweets from the Earth cheesecake, what can I
say, we don’t do cheesecake, so I like theirs. But I love our stuff, and I really don’t veer from it often. But I’m a diehard vegan
restaurant lover. I love Sadie’s (504 Adelaide St.) and Fressen (478 Queen St.) and all those guys.

What’s next up in the future for Bunners?
Kevin and I are always toiling away in our minds thinking of what we can be doing. We definitely want to open up a small second location
downtown in a high traffic area, that’s our next big thing. And we’re expanding our whole sale right now, and coming up with cool packaging
and stuff. It’s exciting times for Bunner’s.
~Kait Fowlie

Gluten-Free Garage Returns to Artscape Wychwood Barns on May 27