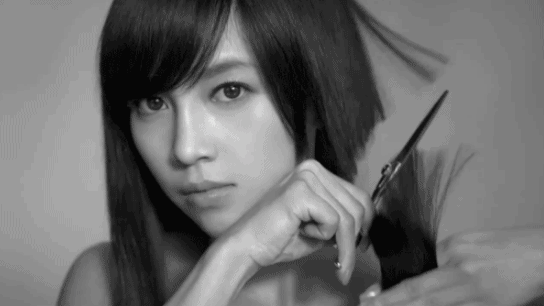 I Cut Off All My Hair

It took the booking of an appointment, an anti-anxiety pill, and a little bit of wine.

It began with obsessively Googling short hairstyles, saving photos I liked to my phone, my laptop, even my work computer. I would examine them in my spare time and imagine myself with a pixie, a bob, or a mess of short layers instead of my typical straight mane.

I’ve had long hair my whole life, minus some jaunts into medium length “lob” territory. This was a significant chop, one normally reserved for break-ups and mid-life crises. But I had neither–just this overwhelming urge to change something, to make myself look right in a way that had nothing to do with poor self-image. For once I wanted to look in the mirror and feel that the outside matched the inside, that I could never be mistaken for a “mall girl.”

The mall girl is a concept I came up with long ago, before I got my tattoos, back in the days when I was dying to look like a hipster. The mall girl is fairly basic, but never a bitch. She likes Old Navy’s $1 flip-flops. She wears minimal make-up but owns a lot of Sephora products. She goes clubbing and has dresses for every occasion. She gets regular pedicures and tans in the summer. But most importantly, she has a long swath of hair that hangs like a horse’s mane. She plays with it often, brushing it from one side to the other while she talks or shifts her weight from hip to hip, combing her fingers through it and flopping it over in a cresting wave.

I had that hair, but I never wanted to be associated with that girl. I wanted to feel free to craft my own image. While long hair suited me, I knew it couldn’t possibly be the one beautiful image I could possess. I thought if I had hair that was short and sleek (and artfully messy) it would feel right and womanly, like myself.

The morning of the appointment, I had a massage, so I showed up to the salon with oil streaks all through my normally dry-shampooed hair. It wasn’t an emotional moment when Thya, my very trusted stylist, grabbed all the hair below the nape of my neck and hacked through it like she was trimming a hedge, leaving me at lob length.

I nearly told her to stop there, at the mid-length haircut in the middle of my comfort zone, but I couldn’t. I had already committed, mostly due to a video of a girl shaving her own head. I knew her only through Twitter as the girl with a buzz cut. Then one day, she posted a video of her actually committing to doing it, by herself, in her bathroom, with clippers and Sinead O’Connor. It was a fifteen-minute emotional overhaul, from trepidation to momentary bravery to awe and fear to a final and brilliant burst of courage. All her beautiful blonde hair had fallen away, her eyes, neck and collarbone exposed. She looked strong, like she’d cut away the extraneous marble to reveal the angel beneath.

I wanted to feel that.

So I let Thya cut, and keep cutting, a process that took an entire afternoon. While my new lowlights set, I was left alone with nothing but a trashy magazine and my fear, which was somehow not slated by seeing cellulite in bikinis. What would Joan Rivers have said about me on the red carpet, without my lion’s mane like a cape of longstanding female sexuality? Would I end up like Jaeda on Cycle 7 of America’s Next Top Model, crying over spilt hair?

I came back to the chair apprehensively, but as Thya started to trim away, a new woman began to emerge. She was fierce, modelesque and sleek, someone who had been hiding inside me for years, but whom I never had the courage to get to know.

Now she’s me–the everyday me who wakes up with bedhead and cowlicks, the me who has the courage to pair statement earrings with short hair and enjoys the brush of the metal and jewels on my neck, who plays boyishness against femininity and enjoys the game, who feels polished and sophisticated and real.

The mall girl fears are gone, swept away and discarded, along with all my excess hair. What’s left is a woman safe from all labels, save for the ones she puts on herself. What’s left is me.