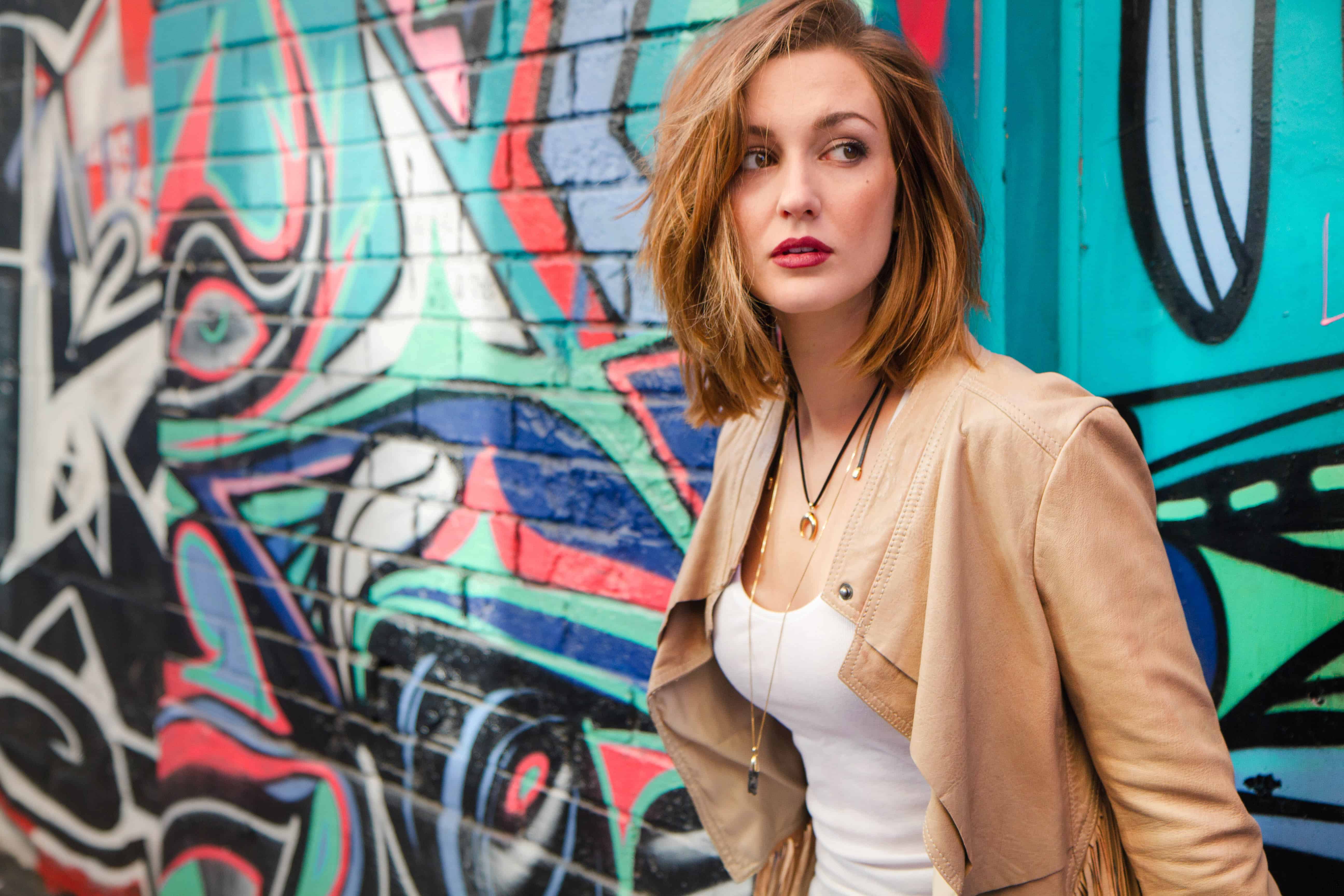 Toronto-born actor and director Katherine Barrell is preparing for one hell of a year with a list of highly anticipated projects. This includes the second season of hit Syfy television series Wynonna Earp and CBC’s brand new comedy Workin’ Moms. You can also catch her in A Nutcracker Christmas, premiering on the Hallmark Channel December 10.

Barrell is passionate about female empowerment, and when she isn’t acting, directing and producing, she is representing GIRL TALK Empowerment’s Pink Box program. (FYI: GIRL TALK Empowerment is a social enterprise dedicated to uniting and empowering girls to make their mark on the world. Their Pink Box subscription service provides girls with items that not only make them look and feel good, but also do good. $1 from each Pink Box goes to Because I Am a Girl.)

We caught up with Barrell this week.

Can you briefly describe your career trajectory to get to where you’re at now?

I studied classical theatre at George Brown Theatre School and transitioned to film acting soon after. Four years ago I launched my production company, Kit Media, and have since produced seven short films and directed three.

When did you know this was the career for you?

When I was a kid I watched a behind-the-scenes video of Angela Lansbury voicing Mrs. Potts from Disney’s Beauty and the Beast. I was fascinated that real people were playing those characters. I told my mom that I wanted to be “the voice of the Disney characters.” In grade 8 I wrote in my yearbook that I wanted to be a film director. So I guess I have always known in a way. In high school my best friend had several family members who worked in professional theatre. Growing up I didn’t know anyone who made a living in the arts, so it was getting to speak with her family that really convinced me there was a way to make this my career.

When I left theatre school I had coffee with a director I admired to get some career advice. I was so torn because I didn’t know which discipline I wanted to work in, theatre acting or film acting. I felt like I had to choose and basically wanted him to spell out for me which one he thought I should pursue. Instead he told me it wasn’t my choice and that the industry would choose for me.

Looking back, this advice encouraged me to remain open to all the possibilities life was going to bring to me. If I had been narrow-minded, only focusing on one defined path or check-list of “shoulds,” I may not have said yes to taking more camera training, or doing student films or producing shorts, all of which steered me towards working predominantly in film today (which I retrospectively feel is the best fit for me). However, I’d still love to do the occasional play because I really do miss the stage, so I’m putting that into the universe!

Tell us about the projects you currently working on.

I just completed filming on a wonderful female-centered comedy, Workin’ Moms, which will air on CBC in the new year, as well as a Hallmark Holiday Feature called A Nutcracker Christmas, which airs December 10 on the Hallmark Channel.

As a director I have two short films running the festival circuit and just finished post production on a teaser-trailer for a television show concept that I am about to begin pitching with my producing team. In December I travel to Calgary to begin filming on season two of Syfy’s Wynonna Earp.

I had such a hard time in my mid-twenties; I hit the “quarter-life crisis” HARD coming out of college and struggled with so much anxiety. Acting is a notoriously tough business and trying to juggle several soul-sucking part-time jobs while waiting for the phone to ring, wondering if you’ll ever be able to make a living as an actor, was really tough.

I feel like I’ve finally hit my stride over the past year. The best part about being my age is that I have come to a place where I feel confident enough in myself and my skill set to believe I can maintain steady work in this crazy business. [Unlike] when you live contract to contract, the self-assurance that there will be another job even though I don’t have it yet, has made a massive difference for me. However, I had to put in a lot of leg work, networking, and entry-level jobs to get to this place. The key for me was diversifying my skillset. I feel like I’m finally at a place where I can work professionally as an actor, director or producer. I’m not a one-trick pony, and that is powerful!