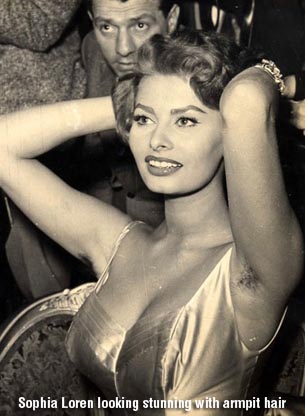 And I’m a hairy person. I won ‘Longest Leg Hair’ two years in a row in my Res’ No Shave November contest. I received a trophy made out of a disposable razor, a lot of horrified looks and maybe some respect from other women who couldn’t imagine letting people see their hairy legs.I have hobbit toes and ‘orangutang’ arms (I wasn’t teased much in my youth but I definitely remember a crush telling me that). When I grow my leg hair out it’s really overwhelming. It’s a dark, thick blanket and if we still lived in caves everyone would be jealous because I would be so warm and would never have to make fur pants because I had hair pants on at all times. But in 2012 hair pants are considered embarrassing. And I struggle with this, like many people (both women and men).

Movember makes conversations about body hair particularly relevant this month. While the fundraiser itself is a worthwhile undertaking (it’s not too late to donate!) there has been a backlash against women who choose to participate in all the hair growing fun. Conversations about ‘having a ‘No Dick December‘ for the women who partake in No Shave November or woman planning to celebrateVa-january as ‘revenge’ against menfolk are all over the internet. Some of the things people say are terrible and others are meant to be amusing. The frustrating commonality between both of these responses is that they are perpetuating the ‘hair as bad’ stereotype. Thankfully there has been a huge outcry against the exclusion of women from No Shave November and discussions about body shaming abound.

This year my hair growth was inspired by laziness. I often give up shaving in the fall as four months of nicks, ‘lucky patches’ and fretting about stubble is exhausting. This September we also moved into a new apartment with a tiny shower and I haven’t bothered to find the special ‘no water zone’ in which shaving is made possible. This year, unlike most, I’ve let my arm pit hair grow as well. I hadn’t consciously decided that I would let it grow out, I just didn’t shave it. I hadn’t thought about being seen publicly until I wore a sleeveless shirt and absentmindedly left the house. I felt a bit shy but then I also felt a bit great. I felt powerful. There was a tiny, hairy ‘fuck you’ under each of my arms.

This reaction is the reverse of a memory I have of preparing for a grade seven pool party. I had shaved my underarms but noticed that there was a shadow of dark roots under my skin. I was terrified someone would see. “She doesn’t shave! She has hair on her body! She’s a boy!” I resigned myself to not playing water volleyball, high-fiving or, you know, moving. It took a long time before I gave up worrying about it.

When I told my partner about my decision to go bravely, fuzzily into the world we both admitted that we were worried about people’s reactions. Why? What would happen? People would think I wasn’t hot? That I’m gross? I’ve since allowed my hairy arm pits to be viewed in public many times. At first I joked it off as ‘winter growth’ but now talk about it with pride (see: this article). I’ve always admired women who refuse to shave. I hope I might inspire others to do the same. The people who think it’s ugly and unfeminine are usually blinded by beauty myths. The women, men, boys and girls who see my hair and think about why it’s there are the ones who matter to me. The people who question their initial, seemingly instinctive reactions matter. Hopefully they will draw their own conclusions about the relationship between hair and beauty.

I know that my definitions of ‘beautiful’ and ‘sexy’ are socially constructed; I’m struggling with twenty-six years worth of razor blade ads, articles about superlative depilatories and ladies’ waxing parties. I’m still self conscious about when I notice people noticing. I truly believe that revealing body hair is a difficult choice to make. I am in awe of women that go through all seasons openly without shaving. I have to remind myself that smooth does not always mean sexy and that this is a process. I’m shaving some things and not others. I like my arm pit hair but continue to shave my arms. Maybe one day I’ll stop and maybe I won’t. I don’t think we should have to commit ourselves to being completely hairless or fully hairy. Navigating our own relationships with body hair grants us some autonomy in a world full of body shaming. And maybe it will let some other grade-seven girl confidently high-five her crush after a great game of volleyball.