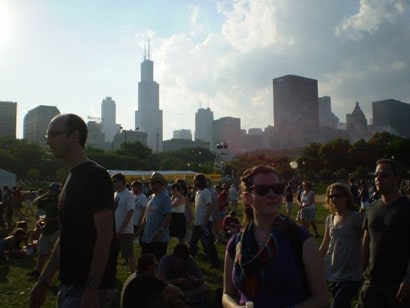 When your hair goes grey and your bones get creaky, don’t give up! Retire from the road and make a home for yourself in the windy city, on a stretch of green at the lakefront framed by skyscrapers. Pitch some tents, tap some kegs of Bud, draw up some psychedelic Alice-In-Musicland graphics, plug your amps in, and start a party. SDTC writer Sam and I got on a Greyhound bound for Chi-City to join in. A tribute to Lollapalooza’s 4th year staying put: Farrell-fest 2008.

VIVA LA MUSICA:
Lollapalooza definitely has it’s own thing going. Despite stages named after sponsors and free AT&T fans (the plastic kind, not the human kind), it somehow manages to escape the soulless cookie-cutter feeling of some of the newer music festivals, concerts that seem to have been spawned from some E-Z-Fest kit a promoter mailed to all the cell phone companies in North America. Maybe it’s the sun setting over the Chicago skyline, or the place in recent music history that the festival’s name holds, or maybe it’s having the grinning ex-Jane’s Addiction frontman to keep track of the festival’s integrity. It’s not in the desert, or in the mud outside Memphis, but somehow Lollapalooza still has that synergetic something.

Most of that something comes from the performances, and a line-up that seems to get more awesome every year. Somehow still able to hold on to her guitar despite inevitable sweaty-palms, The Kills’ Alison Mosshart kept her long sleeved leopard print shirt on for an entire set of skinny-legged dancing, thrusting, and kicking humidity’s ass. Mosshart and Jamie Hince have a brother-sister-like connection onstage, and the only thing you can think about when watching The Kills is this: How are they so COOL? It’s like 3700 degrees out here! Is it because Hince is British? Whatever it is, it’s nice that there are still rock stars out there doing what rock stars are supposed to do: releasing good albums, putting on amazing performances, and being cooler then you could ever be. (myspace.com/thekills).

No matter how boring Bloc Party’s latest album was, Kele Okereke and the boys from Britain still have an amazing presence onstage. Wearing a Barack Obama t-shirt, Okereke sang a passionate version of ‘This Modern Love’ at sunset. As he sang the last line, looking up at the Sears Tower and the city skyline towering above the park, he said “Did you see that? The sun just went in.”(myspace.com/blocparty) And then, after sunset…LOVEFOXX! Beginning the set in a bright red jumpsuit adorned with giant fake flowers, and finishing off in a skintight 80’s-floral-print bodysuit number, the CSS lead singer dedicated songs to dry vaginas, jumped all over the stage, and built a dance party with her bare hands. The rest of the band is just as cool as she is, and they all seemed aware that, given plane delays kept them from playing the festival last year, they had something to prove. There is nothing more fun than watching performers to do what they’re supposed to do, and CSS is supposed to…dance sexy.(myspace.com/canseidesersexy)

Of course, there’s no question that finishing the night with Radiohead, dusty and sweaty and staring up at a skyline stretching towards the stars, would be amazing. Fireworks went off during the middle of the set (not family picnic roman candle fireworks, either, but municipal-license-requiring giant awesome fireworks) complimenting the amazing lights and haunting music swirling from the stage. (myspace.com/radiohead)

On the second day, MGMT was a big giant sweat fest. Very few other bands were scheduled at the same time as they were, so it was a lot of being jostled by people wearing white visors and polo shirts talking about Guitar Hero. (which, in my opinion, is better discussed in a basement on a futon. Plus, then you have air conditioning and you don’t irritate me.) Regardless, Time To Pretend is still my song of the summer. Me, and everyone at else Lollapalooza, that is. (myspace.com/MGMT) After MGMT, Sam and I made our way, via several trips to the beer tent, to Broken Social Scene. At this point, we became separated, and I discovered just how many pretty brunette girls in Ray Bans there really were at Lollapalooza, before abandoning my search to concentrate on my patriotic duty: dancing to Broken Social Scene. Kevin Drew also felt the need to break out the patriotism, reminding the Americans in the crowd that, this November, they weren’t just voting for America, they were voting for the world, and they needed to do their part. (Number of Barack Obama references at Lollapalooza= number of girls in Ray Bans x 706) (myspace.com/brokensocialscene) Doing some leap frogging over picnic blankets (Sam and I reunited during “It’s All Gonna Break.” It was very emotional) to the edge of the stage, we waited as the sun set for Wilco to come on. And when they did, the boys from the Midwest stepped it up a notch, dismissing the on-stage festival uniform of white-v-neck-tshirt-straw-hat-sunglasses for fabulous spangled suits, embroidered and sequined each with a different theme: under the sea, waving lucky Asian cat, etc. Those in need of some flashy fall formalwear, take note. (myspace.com/wilco) On the last day of the fest, despite being pelted with chunks of ice from some well-meaning fan standing on a stage barrier (Sam has the scars to prove it), Girl Talk played an amazing set. Think I’m exaggerating? Towards the end, he had to ask all the dancers on stage to move back into the crowd, because THE STAGE WAS BENDING. Dancing to the point of destruction. He then crowd surfed in an inflatable dinghy, leapt out, and front-crawled his way to the sound booth. Supercool. (myspace.com/girltalk) After sunset, The National mesmerized sleepy festival goers with a slow but steady set, (myspace.com/thenational) and then Kanye West closed the festival. Living up to all the hometown hype, Kanye put on an amazing show, even inspiring some tears with his passionate dedications to his late mother. (myspace.com/kanyewest) A mix of old and new, he ended his powerful set with ‘Stronger’, and then the crowd surged out of Grant Park, filling the streets of Chicago and blocking traffic, chanting, shouting, drinking from bottles hidden in paper bags, and swarming the train station. Welcome to the good life.

The Gossip's new album is in stores now, and our lifelong girl-crush on Beth Ditto continues