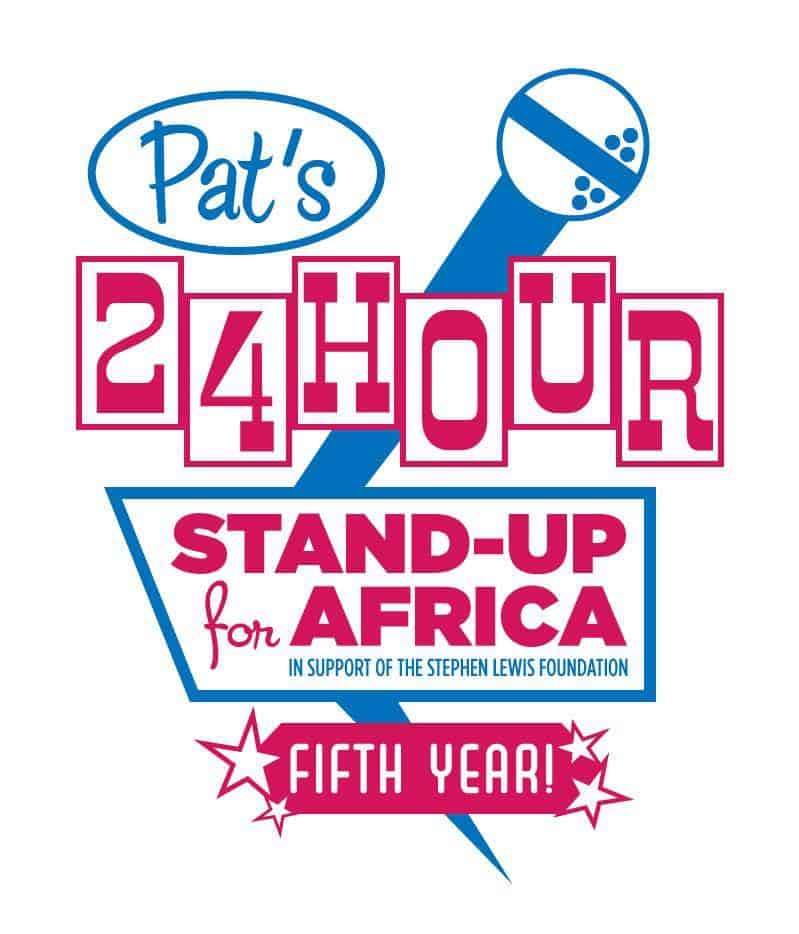 Stand Up for a Cause: Pat Thornton’s Doing 24 Hours of Comedy to Combat AIDS in Africa

Once a year for the past five years, local comedian Pat Thornton has stepped onstage at Comedy Bar on Bloor Street, and stayed up there for twenty-four entire hours. This Friday, he’s doing it again. Do you know how hard it is to simply stand for twenty-four hours, let alone perform actual stand up?? It’s nuts! And it’s for a great cause. Each year Pat and the Toronto comedy community have rallied together to raise increasingly large sums of money for the Stephen Lewis Foundation, a charity working to combat AIDS in Africa. This year’s fundraising goal is their most ambitious yet: $48,000 or $2,000 per hour of stand up. So far they’ve raised just under $10,000, which gives them until Saturday evening to laugh their way to 38,000 more dollars.

I’ve managed to be out of the country every year of this event so far, and am SO excited that this time around I’ll be in town to participate. While tuning in to the live webcast was fun, this yearly comedy marathon has a real had-to-be-there vibe. First of all, it’s completely participatory–what, did you think Pat had a full 24 hours of stand up material? After an hour or so of his own stuff, the jokes fall into the hands of an assemblage of local comedians and whatever audience members are brave enough to put their ‘material’ out there. This mix of Pat’s own jokes, contributions from a team of Toronto comedy’s finest and basically whoever else wants to submit leads to a beautiful, bizarre, day-long inside joke fest. Previous years have involved a LOT of jokes about Kanye West, some insinuations that Wesley Snipes can’t pay his taxes, a delightful tangent about Captain Hook’s right hand man Smee, and enough jokes about Kevin “Hercules” Sorbo to get him to come down and perform a weekend of shows at Comedy Bar.

This year–with their most ambitious fundraising goal yet, the entire Rob Ford situation, and local comic Amanda Brooke-Perrin threatening to tattoo Mario Lopez’s name on her body if he donates $2,000 to the cause–promises to be bigger and better than ever. Tickets for the entire affair (allowing you to pop in and out for coffee, naps, or ATM runs as required) are a measly $20. If you can’t attend, donations can be made online or by texting DARE to 45678. Hey, even if you are attending, consider donating more–38,000 is a lot of dollars!

For more info about the show, Pat, and the Stephen Lewis Foundation, check out pats24hrs.com.