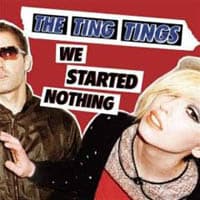 Ting Tings Take Over The World

by Haley Cullingham
The future is blonde, and her best friend wears aviators. Prepare to be obsessed with the Ting Tings (if you aren’t already). Catchy songs that sound as good after 3 tequila shots as they do when you’re mopping your kitchen in short shorts, an inescapable iPod commercial, and a band membership that looks like your too-cool-for-school older brother and his awesome girlfriend, the one who taught you how to put on eyeliner and bought you a six-pack before you turned 19, the Ting Tings are taking over the universe.  AND they’re British. Hotness.

Katie White, who sings and plays guitar, is a picture-perfect rock heroine. She looks like Debbie Harry and she dresses better than anyone you know. Bleach-blond and stick skinny, glaring out from heavy-lidded hangover eyes, she is the definition of all things British and fantastic. Drummer Jules de Martino has a leather-jackety, James Dean coolness, and the combination of the two is electric. Their new CD, We Started Nothing, doesn’t come out until June 3rd, but the Ting Tings are already everywhere. The entire album is as catchy as “Shut Up and Let Me Go,” that song in the iPod commercial that’s been stuck in your head since last Thursday. The Ting Tings more than live up to the hype they’re creating. They play Toronto June 16th @ Mod Club. Buy your tickets now, I guarantee it will sell out.

The Gossip's new album is in stores now, and our lifelong girl-crush on Beth Ditto continues