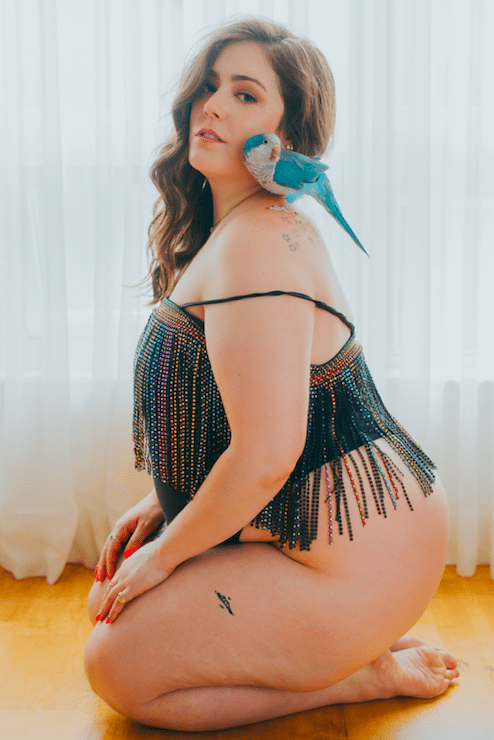 We’re thrilled to partner with the Womanizer (try it!) to host a series of boudoir photo shoots that explore sexuality, body confidence, and desire.

For the next year, Juliette and Fanny, the talented duo behind Scandaleuse Photography, will be entering different Toronto homes to snap pictures of womxn who exhibit values we admire: curiosity, self-assuredness, and a willingness to try new things.

Shedoesthecity has always been a space dedicated to adventure, creativity, and self-exploration, and this is exactly that, but without clothes!

For this inaugural shoot, Hallae shares intimately about how the loss of her mother shattered her; and how, amidst the grieving process, she’s had to devote time to rediscover herself. She opens up about how her weight gain impacted her life, and how she’s currently rediscovering her power. 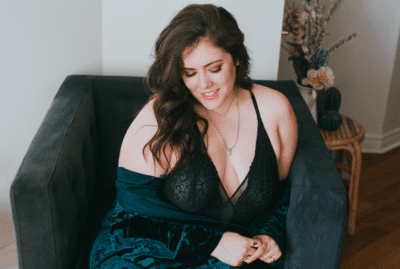 SDTC: How would you describe your sexuality?

Hallae: After my mom’s death and the breakup of a long-term relationship shortly afterwards, I didn’t feel sexual at all. But then I saw my body in some Knixwear photos and saw the comments, and that broke down one barrier: my body wasn’t something to be ashamed of. But there was a second barrier: my sexuality had been put on hold for so long. That was until I allowed myself to take the improv route and say yes to whatever this new particular sexual partner suggested. I trusted him, and I was scared, but I was ready to say yes again. And now, I may be well over 200 pounds, but I can’t help but feel like the sexiest woman in any room. I feel like I’m nineteen again, when I wasn’t afraid to try anything. I may be almost thirty, but I’m back at the Stag Shop asking all the questions and buying that full-body fishnet stocking. In short, my sexuality can be described in one word: renewed.

How did you feel at the beginning of the photo shoot?

To be honest, I had worked myself into quite the state prior to Juliette and Fanny’s arrival. The day before the shoot had actually been the two-year anniversary of my mom’s death, and part of the reason for having this the next day was to have a planned and almost concrete way to celebrate life. Well, you know what they say about the best-laid plans. However, I can’t express how quickly my anxiety dissipated when Juliette and Fanny entered my apartment. I had pulled a bunch of pieces of clothing I stared at blankly; they quickly identified three outfits. By the time I had changed, they had moved around pillows and chairs and tables, and all of a sudden my little apartment felt worthy of a photo shoot. And soon thereafter, they made me feel worthy of this photo shoot. They directed and displayed poses and had such a contagious energy. I was fully into it only a few clicks into the first outfit. 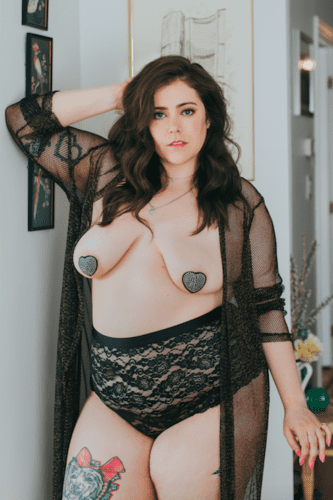 What were you thinking about while it was happening? Did you have a particular mantra running through your head?

I didn’t have a particular mantra (besides “shoulders back, tits out”), but I was thinking of power. I remember sitting on the floor in just a leotard and staring at the camera and having this moment where I felt so much more powerful than I had just a few moments earlier. Sometimes confidence is something that comes naturally, but sometimes we’re thrust into situations that force us to uncork that confidence. It’s not always possible. But before the shoot I decided I was going to at least try, and I did. That was powerful for me.

What do you want to say to the woman who is currently lacking confidence, or feeling insecure when it comes to her body/sexuality?

It would be easy to look at my photos and think, “Wow, she must be so comfortable in her body.” But now you know the truth. I was freaking out up until the moment the photographers walked through the door. Part of me believes that finding confidence in your body is sometimes consciously acting to find it. I’m not saying go out right now and take pictures in your underwear, but that’s one way to do it. No one can convince you your body is beautiful without a bit of work on your part. (Though I’m still here to tell you: it is.) Have you seen it in a teddy yet? What about covered in sparkles? Drape your body in whatever your kink is. Then stare at it in the mirror, take photos of yourself, wear it on a date, wear it on a solo dinner. When that person comes up to you and tells you your body is beautiful, think about how hot you fucking looked, and agree with them. Feel it. Own it. That’s what I’m talking about when I say act consciously. (Then fuck the shit out of them, with consent, of course.) 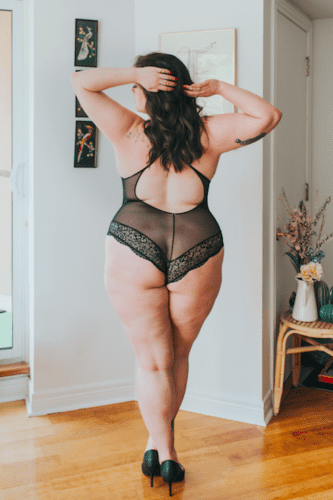 What are some things you’re looking forward to this summer?

Surprises. I have a love/hate relationship with surprises, but they seem to be on-trend for me right now, so I’m riding the wave. There’s some work stuff I’m looking forward to, and as the summer comes to a close and into the fall, a friend of mine and I have planned a slew of events: Lizzo, Nicole Byer, Charli XCX. We’re thinking of adding Carly Rae Jepsen to our lineup! Otherwise, I’ll just be trying not to get burned and to keep my thighs from rubbing together too much.

We’re proud to partner with Womanizer for this year-long series. Unlike any other sex toy, the Womanizer offers touchless stimulation through something called Pleasure Air™ Technology. It’s THE BEST. You really need to try to understand. Find out more here.