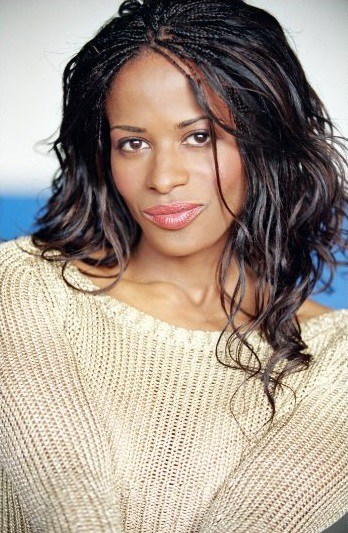 15 Minutes With Daniele Gaither of The Black Version

The Black Version’s Daniele Gaither was named one of the 25 Funniest Comedians in Los Angeles by Los Angeles Magazine’s annual Comedy Issue. You may also recognize her from Fox’s Emmy-winning comedy variety series, Mad TV.

On Saturday, November 24, Gaither will be in Toronto performing as part of Canada’s largest improv showcase, the Big City Improv Festival.

SDTC: What is the funniest thing you’ve experienced in recent memory?

Fave improv character you’ve ever come up with?

That would probably be Cricket, who is a savant of sorts about the penal system from having been a guest of the State a time or two but is now retiring from the game. She is evergreen.

My favourite celebrity impressions of late are iconic black women clapping back and giving no figs (to mix a metaphor)—the original Aunt Viv from Fresh Prince of Bel-Air, American Congressperson Maxine Waters and her “reclaiming my time” moment. When you can hit a topical subject because an improv show aligns perfectly with a news cycle, heaven and earth meet.

Prince’s “Why You Wanna Treat Me So Bad” is good for organizing around the house. For that matter, any proteges of the Minneapolis sound and Michael Jackson are good for preparing to go out. Gangsta Rap and Whitney Houston are good in the car. Dead musicians from the 1980s can get any dance floor going.

Relax! You’re on the right path.

Lately I’ve been reading Iyanla Vanzant and watching her show on OWN. She encourages you to hold yourself to account. And her colloquialisms are a hoot.

It probably involves clothes shopping, and it definitely ends with a margarita and yummy Mexican cuisine.

Feeling perfectly fine about schooling other people’s children in public, and a growing affinity for historical statement T-shirts.

Who is the funniest person you know?

That’s a tough one. I would say my friend Bruce McCoy, who just won his first Emmy for RuPaul’s Drag Race, because he’s had me rolling in the aisles since our days at Northwestern University. He’s the kind of person you can tell is funny when they walk in a room. And Jordan Black is the same way. I’m giving the edge to Bruce because I’ve known him longer and he’s seen me through my darkest moments.

What artwork would you love to have in your space/on your walls, and why?

Lichtenstein for the colours and the sentiments, Varnette Honeywood for the scenes of black American life, and for texture my aunt Beverly Smith’s quilts, which feature nostalgic artifacts from the South. I own some Lichtenstein reproductions and an actual Honeywood. I love kitschy stationery. When I was in sixth grade I wrote a YA novel in a Strawberry Shortcake notebook with Garfield pencils, and I guess it stuck.

I live in Los Angeles. When it rains I dash outside to enjoy it while it lasts.

First a nurse, because my parents were in the medical profession. When Annie came out, I wanted to be in Broadway musicals. In junior high I wanted to be a civil rights lawyer.

Sorting the mail every day. Every. Single. Day. It seems simple but really comes down to prioritizing and not procrastinating.

African hair-braiding techniques. It’s an art form as well as a life skill.

Free and fair elections around the globe.

Melxdie Is Paying Attention & Staying True To Herself