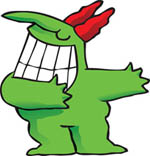 The 2011 Just For Laughs Festival has announced its summer schedule, and good golly, what a fantastic schedule it is. From July 5 to 31, the internationally renowned comedy showcase will take over numerous Montreal venues, bringing yet another delightful line-up of comics to the streets of this great city.

Of note, galas will be hosted by The Daily Show’s John Oliver (July 31) and Modern Family’s Eric Stonestreet (July 29), with Scottish funny-man and Late Late Show host Craig Ferguson also emceeing two events on July 30. Comedy heavyweights Daniel Tosh and Louis C.K. will also participate in the festival, along with two of my personal favourite comedians/ridiculous people, Jeremy Hotz and Kenny Hotz (unrelated as far as I know, the latter of Kenny vs. Spenny fame). Not to mention all the larger-than-life green mascot balloons, street activities, buskers, gags (don’t get caught!) and more. Shit is gonna get real!

Final ticket prices and show dates have yet to be confirmed for several acts; check http://www.hahaha.com for updates, or call 514-845-2322.

The Women of #JFL42: Jen Kirkman

Our Pick of the Week: Got a Girl Crush Pop-Up