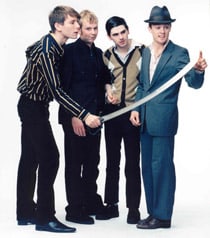 If you are like me, you awoke at 10 a.m. on November 13th to buy Franz Ferdinand tickets for their show on December 4th at Lee’s Palace.

I eagerly clicked away, typed and retyped the security code only to be defeated by a few other lucky Torontonians. Soon after, the retail ticket of $25 was selling on Ebay for upwards of $100.

Not only are the tickets cheap, but the concert is being held in a small venue, making it the ideal setting to view a popular band. In the past, Franz Ferdinand has performed in Toronto’s Ricoh Coliseum, which makes Lee’s Palace seems almost claustrophobic for the talent of the hugely successful Scottish band.

With three stops in Canada, Franz Ferdinand is on tour promoting their latest album, Tonight: Franz Ferdinand, set to be released in 2009. The single “Ulysses” promises the same Franz Ferdinand the fans love: mesmerizing lyrics layered on dance-rock melodies.

Sometimes, it makes me feel guilty about tapping my feet along to the happy beat of a band named after an assassinated Austro-Hungarian Archduke. However, the success of the band has overshadowed the archduke they are named after and the man’s death triggered World War I! (Just try to google Franz Ferdinand; the band shows up before the Archduke.)

It is charming to see a quartet from Scotland take over the world with their music, even if I am not one of the lucky ones that will get to experience them live.

For ticket information at Ticketmaster (or in this case try Ebay!)