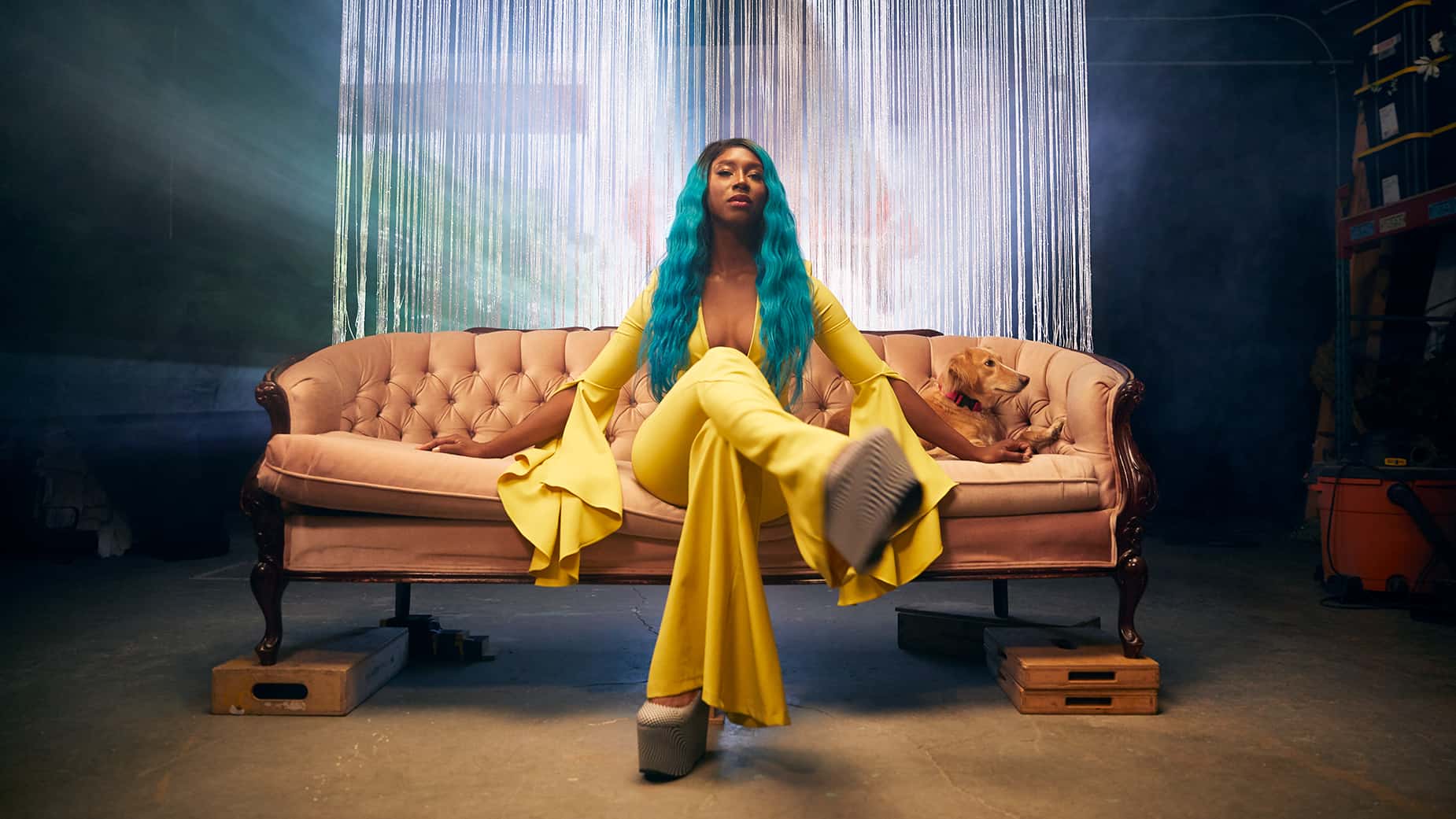 "I needed to write something to uplift my spirit about all the crazy things we're told that we need to do in order to go viral."
Performing Arts

"I needed to write something to uplift my spirit about all the crazy things we're told that we need to do in order to go viral."

In the early weeks of the pandemic, singer and songwriter Domanique Grant hitched a colourful wagon to the back of a bicycle and took to the streets to perform her music. She brightened up city blocks and brought much-needed comfort during a frightening time.

As she meandered through neighbourhoods, Grant belted out “Till We See The Sun,” a song she wrote that was inspired by that moment in history, when the virus was new to Toronto and no one really knew what was going on. “My tours and all the events and things I had planned got cancelled within the span of a week. I was having a bit of a hard time and my mom, who has always reminded me to lean on my talent and light whenever there is uncertainty, also reminded me that there were other people going through something similar,” says Grant, who wrote the single in a couple of hours and bravely decided to perform it to strangers, as a way to lift people’s spirits and make them feel a little less alone. She succeeded, and the residents of Toronto were thankful for her efforts.

Watching the video now is heartwarming and emotional but also eerie, accurately capturing the strangeness, fear, and uncertainty that we all felt when COVID first hit.

It’s been over a year since Grant released “Till We See The Sun” and her new single “Airbrush” likewise captures the moment we’re living through, but in a very different way.

Society’s obsession with Instagram is not new, but with COVID-19 forcing social interactions online, we’ve all been looking at ourselves more than ever through a screen. Things we may not have noticed in the past, while attending a meeting in a boardroom or connecting with a friend for coffee, have been constantly projected right back at us, close up. After 18 months of examining every inch of our face, the way we see ourselves has changed. For many, confidence has been rattled.

From wrinkles to blemishes, grey hairs to the way our teeth look when we talk, we’re glaring at ourselves, and looking straight at our “imperfections” all day long. New insecurities have surfaced and as a result, the beauty industry has seen a boom, with worldwide sales expecting to grow 5-7% annually, amounting to $800 billion in annual global sales by 2025.

Beyond buying serums and highlighters and the numerous other products pushed on us constantly by both brands and influencers, people are also manipulating their faces and bodies with filters and editing tools. Airbrush is one of the many apps that people have downloaded (over 50 million) to “enhance” their looks. It allows you to sculpt your features, add makeup, change the width of your face, resize your cheekbones, alter the shape of your eyes, shrink your nose, plump your lips, and more.

For Grant, becoming an artist in the spotlight arrived with several pressures to look a certain way. She began to question whether she should photoshop her pictures, wondering if that was an important key to growth and success. “I think ‘Airbrush’ is a culmination of years and years and years of not really feeling good enough online,” she says, sharing that creating a song that satirized Instagram provided a certain level of relief. “I needed to write something to uplift my spirit about all of the crazy things that we are told that we need to do in order to go viral.”

Grant makes it clear that the song is not about judging people for the choices they make, but drawing attention to the bigger picture. “I wanted to put out a song that pokes at all the things that we’ve normalized and flips it on its head and have a bit of fun,” she says, adding that it was only recently has she felt comfortable sharing photos online with her natural hair. She hopes “Airbush” inspires ideas and questions about identity, or as she asks, “How can you show a bit more of yourself? How can you invite the world to be a part of that?”

The endless tweaking and editing and filtering affects our mental health. Even if we aren’t doing it ourselves, seeing so many photos of people with seemingly flawless skin, over and over again, can make one feel inadequate. For Grant, taking a break from social media was necessary. “I stopped posting for a while. Social media tests our mental health every single day. I don’t know if you have a joyous time just worrying or thinking abut the photos that you’re going to post all the time, but it’s definitely something that I think a lot of artists struggle with,” she says.

The chorus “Airbrush. Crop that shit. Hashtag, Instagram Queen,” cuts straight to the point. Those of us who frequent the platform know exactly what she means. Watching Grant belt them the lyrics out while bending backwards over cars, one can’t help but smile and think, “How did we get here?” She definitely captures the ridiculousness of our existence, and it’s catchy as hell.

To help with the moves Grant partnered with Choreographer Leon Blackwood, who has worked with everyone from Ariana Grande to Britney Spears. The video was shot in Pie In The Sky’s 5000 square foot studio in Toronto’s east end, and included lots of candy-coloured wigs and big-ass vehicles.”We took this idea of cars and created an Instagram-inspired culture video that surrounds Instafame. It was a lot of fun getting out of my head and being able to joke and have fun with Jeeps,” says Grant with a laugh. The video is a lot of fun, while also forcing audiences to do some self examination.

From performing in the streets to addressing an issue that many are unwilling to talk about, Grant has guts. She also possesses empathy. “It’s many things but in the end ‘Airbrush’ is supposed to be a song that really supports and celebrates who we are, and reminds us to be ourselves and love the skin we’re in,” she says. It’s something we all need to hear and remember, constantly.