Similar to Vaccine Hunters and Toronto Indigenous Harm Reduction the On Canada Project is part of a growing trend of younger Canadians fed up with government incompetence, who are taking things into their own hands.

30-year-old Samanta Krishnapillai understands that Instagram can be used for much more than selfies. When the pandemic arrived in Canada in 2020, there was mass confusion as to what exactly COVID-19 was; people needed to understand everything from the symptoms to watch for to how to properly wear a mask. Aghast at the confusing government messaging and frustrated with the gaping inequalities with pandemic-related communications is what led her to launch the On Canada Project in May of 2020.

Like so many millennials, Samanta understood the capabilities of how social media could be used for good. “Not to be disrespectful, but a lot of older generations use social media as a billboard when it truly is a great two-way communication tool,” she says. “We have to reach people where they are and speak in a way that resonates with them. And we have to do it with compassion.”

With a true talent for parsing information to help make sense of the world, the On Canada Project began drilling down other news stories, helping Canadians make sense of, and care about, a multitude of issues, including everything from the urgency for paid sick leave to COVID-19 cases in migrant workers to the rise of anti-Asian racism. Now, they have 170 volunteers to support their efforts and a following of nearly 90,000. “We are not telling people to be activists or to advocate, we are giving them the tools they need to tackle problems they already feel are wrong,” she explains. 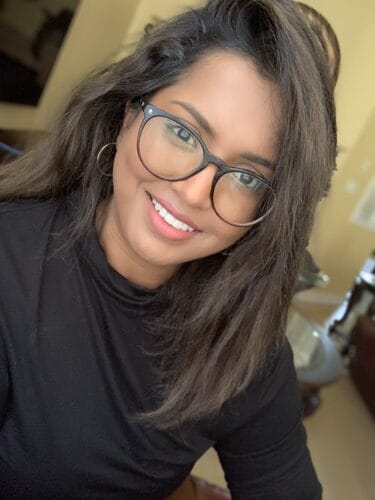 Like all successful relationships, Samanta knows that connecting and communicating with people isn’t just about talking to them, but also listening. “We do a lot of social media listening for this project. I’m reading comments, I’m watching who’s tagging us, I’m reading people’s stories online. It helps us understand what people are feeling.”

For Indigenous History Month, the team at ‘On Canada’ had been working closely with Indigenous studies professors, organizing content to help educate Canadians on inequities, as well as celebrate Indigenous stories. When the horrific discovery of 215 Indigenous children in a mass, unmarked grave came to light, the team quickly, but carefully, put together a document that answered questions and explained things so that people would be motivated to take action, or as she says, “It can’t just be a couple of us outraged, we need all of us to be outraged.”

Effective, easy to understand, and with clear action steps, the messaging resonated and has since been shared by hundreds of thousands, including by Dan Levy and Ryan Reynolds.

The graphic helped people realize that genocide is not a “them” issue but a “we” issue, that we are all connected, and we all play a role in whether it continues or not. 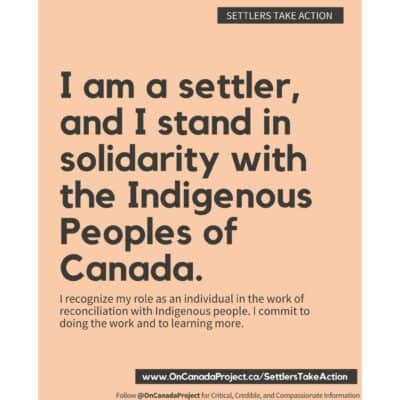 “I am a woman of colour and my family is from Sri Lanka, which was colonized, and there’s often some confusion around communities of colour that come from countries that experienced and suffered from colonization in what their role is with reconciliation with Indigenous peoples here. I wanted to make sure that was clear in our content. We have intergenerational trauma from the colonization we experienced, but that doesn’t mean that we have not benefited from the colonization that happened in this land.”

The On Canada Project community is growing quickly. It’s obvious that people were craving clear, consistent, and concise communication, or the opposite to the government’s harmful and confusing messaging, be it about schools or vaccine rollout. But the success of what Samanta has built is also largely due to her approach: “I don’t like hating on people. I like hating on systems and structures. People are just operating within them.”

Interested in supporting this cause? Check out the On Canada Project on Instagram, read their resource lists, see how you can take action as a settler, and consider volunteering or donating to their mission. Follow Samanta on Twitter and keep yourself updated on current issues and the future of the On Canada Project!

AGO extends submission deadline for their Portraits of Resilience project to June 25th, and encourages all to submit!