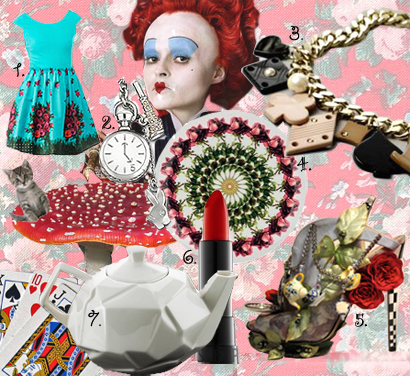 Alice In Wonderland Style Guide: Because Absurd is the New Pink

It’s unlikely that Lewis Carroll ever saw this coming. His collection of children’s stories about a little girl discovering the impassible (because nothing’s impossible) has taken the world by storm over and over again since the Victorian era.
The infinite possibilities (passibilies?) of imagination and absurdities that this story embodies, offer the perfect opportunity for fashion designers to emancipate their inner mad hatters. Needless to say, the Alice in Wonderland bandwagon is a crowded one. Everyone from Stella McCartney to Urban Outfitters to Avril Lavigne hopped on with an inspired collection.
Some were more extravagant than others. With her song (aptly) titled “Alice” appearing on the film’s soundtrack, Avril naturally did a collection for her line Abbey Dawn, which is similar to her wardrobe in Skater Boi, only with Victorian graphics replacing the tie. A little harsh? I’m allowed to dislike it; I’m not a tween.
On the other side of the spectrum, Paris department store Printemps commissioned designers such as Chloé, Alexander McQueen and Christopher Kane to create a piece for their Alice themed display window. Lavish crinolines and bizarre upside down contraptions are featured and sadly, aren’t for sale. Bergdorf Goodman has also followed suit, and Bloomingdale’s will too later this month.
In honour of Mr. Burton and Mr. Carroll, we decided to whip up our own Alice in Wonderland style spread to celebrate the similarities between fashion and chaos.