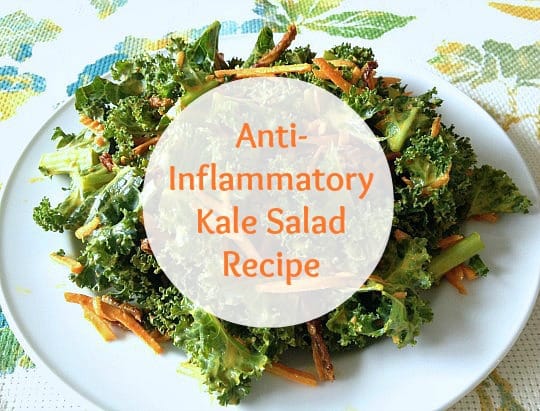 I’ve actually eaten this kale salad recipe three times…this week! It’s delicious! Ever since I interviewed Julie Daniluk, I’ve really been trying to add more anti-inflammatory foods to the meals I’m eating. It’s easier than you would think, and this kale salad recipe is chock full of inflammation fighting nutrients.

Before I get into the health benefits of this kale salad recipe recipe, I’d like to remind you, as with all of my kale salad recipes, make sure you get in there and massage your kale! It helps the kale lose its bitterness.  Also, you can actually dress this kale salad in advance, and it gets better over time (unlike spinach salads).  One final tip – if you got a MASSIVE head of kale, you may want to double up on the dressing ingredients.

Ok, onto the health benefits.

1) Turmeric
Turmeric contains compounds called curcumin which have antioxidant and antimicrobial properties. Studies are suggesting that curcumin has properties to fight diseases such as inflammatory bowel disease, pancreatitis, arthritis, as well as certain types of cancer.

Tip: Add 1 tsp of turmeric to my Roasted Chickpeas Recipe

Ginger
Ginger is a miracle food. In a study conducted on females with PMS, taking 250mg of ginger in powder form was as effective as 400mg of ibuprofen in helping with painful cramps.

Tip: Add a knob of ginger to your smoothie in the morning

Tomatoes
I loooove sundried tomatoes. I think they’re way more fun, and tastier, than regular tomatoes. Tomatoes contain a nutrient called lycopene and studies have shown lycopene to inhibit inflammatory mediators in the body.  The tomatoes also add a sweetness to the recipe.

Tip: Use fresh tomatoes instead of ketchup on top of your burgers this summer

On to the recipe!

FIGS: What Are They Good For?