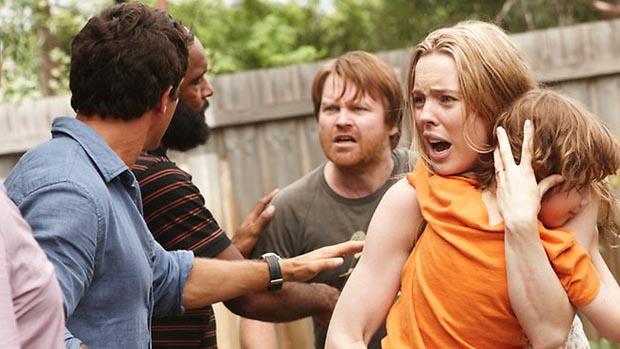 Ask a Child-Free Person: Can I Discipline Someone Else’s Child?

So if you’ve watched either the American or the Australian version of The Slap, you know that when people discipline other people’s children, shit frequently goes down.

It’s a show where the inciting force is literally that: At a birthday party, an angry bystander slaps a 4-year-old kid for swinging a bat dangerously close to other kids, including his son. The cops are called, friendships are ruined, marriages are destroyed. Yep, disciplining another person’s child in our society can fuck things up. It’s a definite taboo, but I argue, if done correctly, it shouldn’t be.

Here’s the thing, while I really, really don’t support slapping other people’s children – or one’s own for that matter, I do believe that well-worn cliché that it takes a village to raise a child. Sometimes you really do need to have words with someone else’s tiny human, and now I’ll explain when and how this is appropriate.

For example, when safety is a concern and you are the adult on duty, you absolutely must intervene. Say you’re at a pool party and the child’s parent/guardian has gone inside to use the washroom. You’re there, the adult watching said child, and said child is about to dive headfirst into the shallow end. Well, then absolutely you HAVE to say no. If they don’t listen, you may even have to grab the child to get them out of harm’s way. I’d like to think this is a pretty obvious course of action. I can’t imagine any parent objecting to anyone who has a genuine interest in saving their kid from an early death.

When safety is at risk, you do what you have to do. This also goes for kids hitting/harming other kids. I believe one’s purview to discipline other people’s children stretches as far as bullying actions like name-calling. If the parent isn’t there to stop it, there’s no point in prolonging a situation that could hurt you.

So what happens in troubling situations when the parent is present? Do you still discipline a child then? Maybe. If a parent is addressing the situation – even if it’s not exactly the way you think is best – I say step off. As long as the problem is more or less being handled and the child is no longer engaging in the problematic activity, it doesn’t matter if you think the parent’s threat to ground them for a week wasn’t harsh enough. You don’t know the child or the situation as well as someone else who is legally responsible for that kid.

While you shouldn’t be a disciplinary nitpicker with other people’s kids, if the parent is completely ignoring a truly dangerous situation (like in The Slap) I say yes, do what you have to do. If  a child is brandishing a weapon close to other people, I would grab the weapon and declare “NO! That is not acceptable!” The parents have no right to object, because their right to discipline their child is trumped by the safety of others. The right to discipline one’s child as one sees fit is contingent upon actually administering some sort of preservative discipline.

Of course, after you’ve taken the dangerous object, or chided child for the dangerous behaviour, I would end by talking to the parents. Explain what you saw and why you did what you did. Be honest about it. Have a dialogue. It may take a village to raise a child, but the parents should usually be the most important villagers in that equation. While I wouldn’t apologize for my actions if they were done to protect others, I would try to make the child’s parents understand why you felt it was necessary to take this course of action.

Even if it’s necessary and you did it for the right reasons, some parents may still be offended by you playing the disciplinarian. However, I’d like to believe that as long as you did it to keep people out of harm’s way, they’ll come around to the idea when they’ve had some time to process the event. If not, at least you’ll have the satisfaction of knowing you did the right thing. And believe me, self-righteousness is a substantial enough feeling to eat for breakfast.