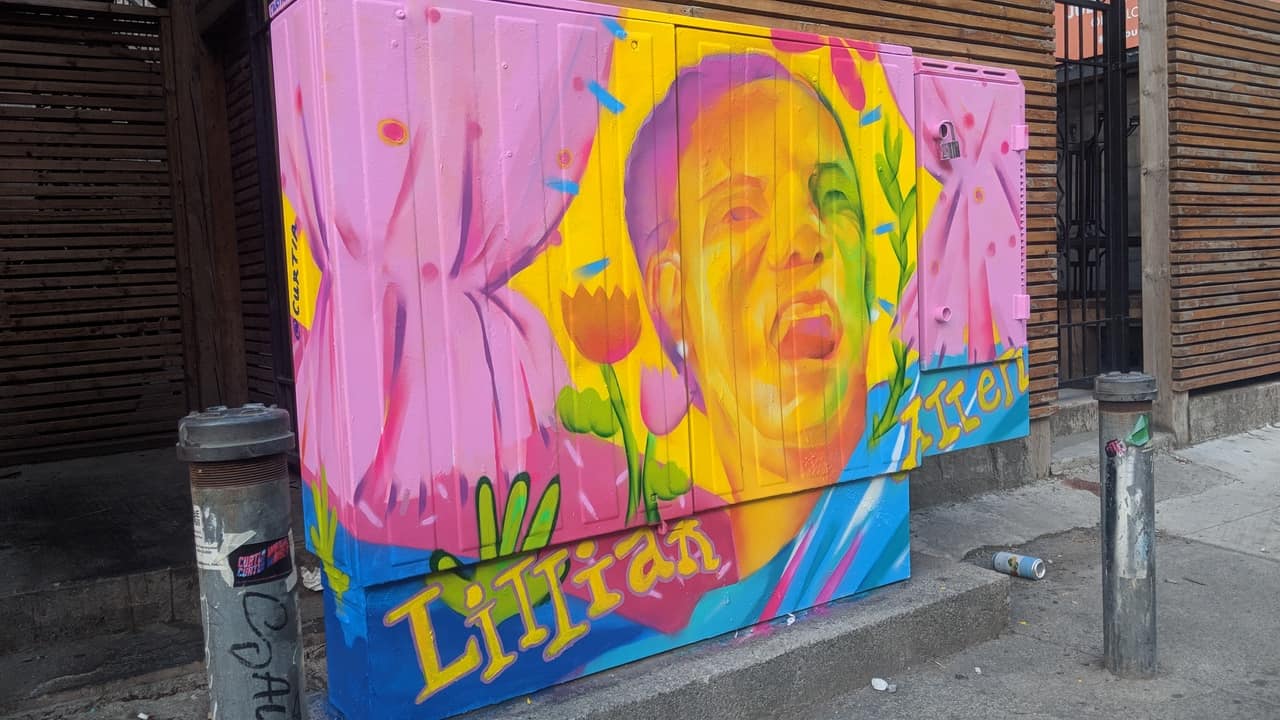 "I need to give him tools and strategies to see with a growing sense of nuance and complexity the world outside of his imagination, so when it breaks through, as it has over the past few weeks with the invasion of Ukraine, his heart is not broken but shaped to keep making space for others."
Art & Design  Life Stories

Every evening on our family’s pandemic walking ritual, we wander through an alley north of Dundas where we pass a mural of a green and purple dragon. I swear this image has lived rent-free in my son’s imagination for two years now! What Frankie sees and hears in the world makes its way into the stories he tells as we walk about the neighbourhood, ever narrating our familial flânerie.

From the alley we turn on to Dundas and pause in front of a boarded-up storefront covered in posters of indie musicians promoting pre-Covid concerts that never came to be. Pulling up his mask as we cross paths with others at the crosswalk, he whispers, “Mama, in my imagination world you are the dragon. I’ll sit between your wings and wear a bandana and a guitar on my back!” No details are missed by his keen eye. 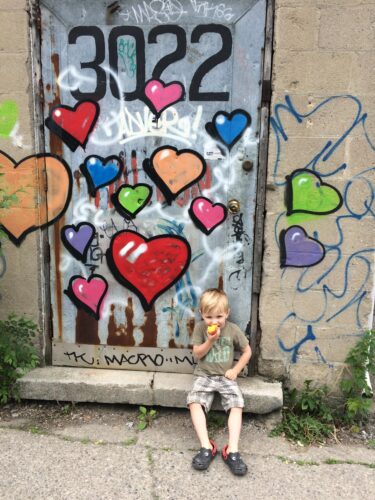 For The Conversation, as a part of her advocacy work for children living through war, York University Professor of Education Aparna Tarc writes, “It’s incumbent on the adult community to seriously and critically engage children’s actual ideas and perspectives of war and its impact on their lives.” She is writing about those children who are living through war on the ground today in Ukraine, Yemen, Palestine and Syria.

Even though in Toronto we are physically safe from the mortar shells and air raid sirens of war, we are still connected to these conflicts through news feeds that my son witnesses. And just as he sees every small detail on our walks through the neighbourhood, I know that he absorbs the news content our household takes in when I hear him play with his Lego and Putin’s name works its way into his storyline.

Is it not incumbent on me then, as Tarc says, to critically engage my son’s growing awareness of war and its far-reaching effects? His privilege as a white boy whose day-to-day is shaped by relative economic security means he doesn’t lack in food or clothing or housing. His learning challenges at school are mitigated by parents who are educators with access. These privileges are real and important for him to recognize, so we talk about them.

At the same time, we also need for him to recognize and value the tenderness of his own heart that deeply feels for those he sees from afar on screens and those he walks alongside on our Toronto streets. I need to give him tools and strategies to see with a growing sense of nuance and complexity the world outside of his imagination, so when it breaks through, as it has over the past few weeks with the invasion of Ukraine, his heart is not broken but shaped to keep making space for others.

The American Psychological Association encourages familial conversations about war, suggesting to parents of elementary school-aged children that we be proactive, anticipate questions and use age-appropriate but accurate language to describe global conflicts that they have heard about at school, with friends, or through the media.

Once I recognized that the evils of war had already worked their way into his Lego stories, I decided that a long walk with my son would be the best way for us to discuss what was happening in Ukraine. My hope was that fantastical creatures like the painted dragon in our back alley might give his young mind an alternative presentation of the dangers and beauties his world contains. 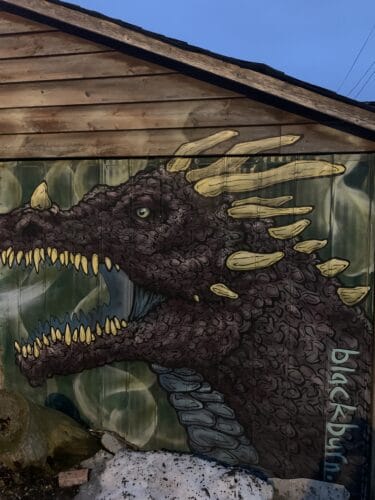 Walking towards his dragon I asked Frankie if he had ever heard the word “refugee.” He hadn’t, so we talked about it. I tried to use accurate language, emphasizing that feeling sad or scared was natural and healthy as long as he didn’t keep it bottled up. My son replied, “In my imagination world the refugees can ride on his back. The dragon will fly them to a new home.” Though we both knew the painted dragon wasn’t real, the desire for magic to interrupt the harsh realities of war was.

To make all the more real the magic my son saw as possible in the world, I needed to show him some real-life heroes who fight for justice even closer to home.

For Toronto’s “Butterfly Project”, artist Adrian Hayles created a piece of environmental activist David Suzuki. His face, covered by the butterfly, acts as a visual metaphor for hope in the midst of raging climate wars. My son recognized Suzuki and said, “I learned about him in school. He fights for the earth!” When I asked him what the butterfly meant he said, without hesitation, “Because it’s colourful: hope.” He saw hope in science and the human potential to fix what we have broken. The impact of colour also shaped what he saw in Curtia Wright’s Queen Street West Mural of poet and activist Lillian Allen. Frankie commented on the pink curtains that symbolize the stage from which she shares her dub poetry. He noticed the use of the colour yellow and her open mouth. I suggested that she uses her words and art as weapons to fight for cultural equity. He nodded, remembering the day he saw “BLM” tagged on a wall near his dragon. Staring at Allen’s face, as he did with the butterfly mural, my son said, “I see hope!” 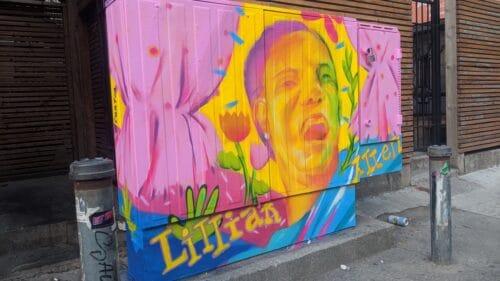 I want to foster in my seven-year-old the ongoing ability to see hope in a world at war. I want for his imagination to be a safe space where he can work through the pain he sees on my Twitter feed and on the streets we walk together. I want him to see justice-seeking heroes who he can weave into his stories, not just the wars that work to steal his hope. Walking the streets together we will keep our eyes open for interruptive art that fights back and keeps hope alive.

Natalie Davey is a writer, educator and podcast co-host. For academia she researches and writes about education, narrativity and care. Some of her words can be found in Chatelaine, Teach Magazine, and more on her website. Find her on Twitter @nataliejoydavey and Instagram @sister_on_podcast.

"I need to give him tools and strategies to see with a growing sense of nuance and complexity the world outside of his imagination, so when it breaks through, as it has over the past few weeks with the invasion of Ukraine, his heart is not broken but shaped to keep making space for others."