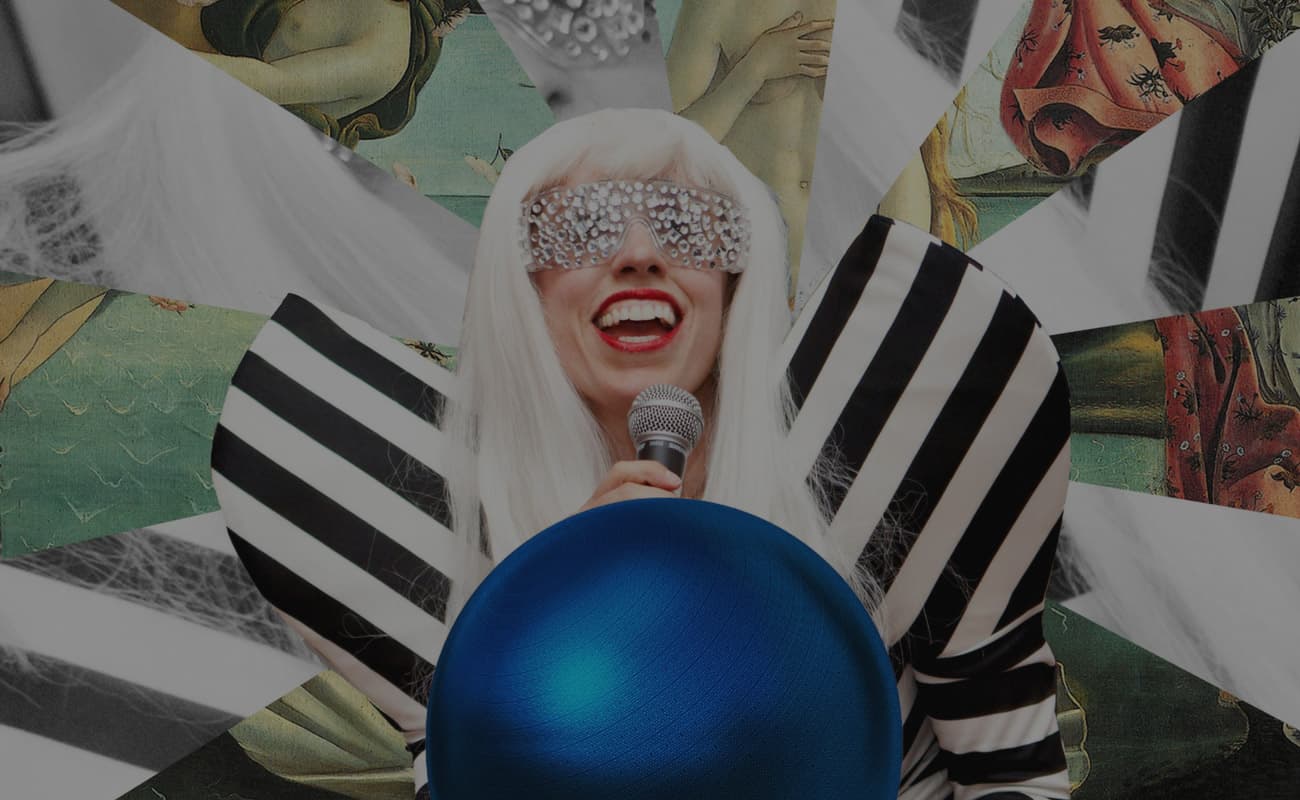 For an indie singer-songwriter living in NYC, it was an enticing paycheque that sweetened the deal. “My publicist said to me, once a week, perform a cover on YouTube of a new hit that comes out. It will get you fans for your own music. When [Lady Gaga’s] Bad Romance came out, I did a cover on guitar. It started getting a lot of views, then someone contacted me and said, “I want to hire you as a Lady Gaga impersonator.” I would have never said yes, but she offered a lot of money [to perform at a party] so I said, ‘Okay, fine.'” 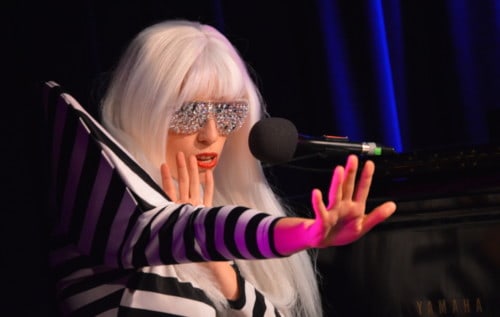 Not initially a huge fan of the pop star, Reich learned the choreography and music, performed, and had a lot of fun doing it. She put up a video on YouTube and it climbed to the top of the Google search for Lady Gaga Impersonator. From there, it snowballed. “I fell into my niche, and I just rode the train,” she says.

Reich has performed as Gaga at countless Bar Mitzvahs and birthday parties in the Hamptons – even a lavish baby baptism party complete with a clown, DJ, magician, puppet show and enough food for a wedding. She would go out in NYC and get mistaken for the real deal, and Lady Gaga herself even tweeted out her support for Reich’s broadway show, #ARTBIRTH, which features a very pregnant Lady Gaga (played by Reich) who’s decided to give birth in front of her most devoted fans as the ultimate performance art piece.”

In the US, IVF is largely a for-profit industry with a huge price-tag. Reich decided to enter the Sher Institute video contest, which awards winners with one free round of IVF. Around this time, makers of a Netflix documentary feature, Vegas Baby, contacted Reich and asked to follow her experience with the contest and her struggle with infertility. She agreed. “I wanted to help and reach out to people and stop the silence around infertility. There’s so much silence and shame.” 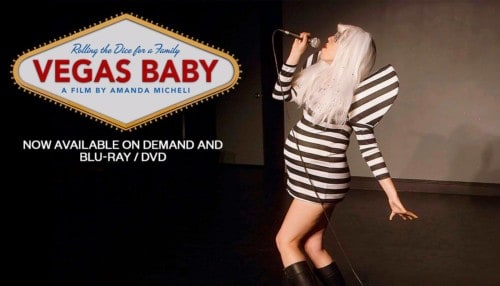 She continues, “Why is there shame? I think it’s profoundly biological. I’m a lesbian, so I’m like fuck gender and stuff, but still. I felt like, well, what’s the point of me being a woman if I can’t get pregnant? On a biological, guttural level, you’re thinking, why isn’t my body working the way it’s supposed to work? I’ve had my period since I was thirteen, every month, for this? What’s the point of suffering sexism if I can’t fucking get pregnant, you know? There’s got to be a bonus to being a woman. Now I’m just this woman with a shitty egg! Also it’s aging – like, I waited too long. Then it’s like a big mid-life crisis truck hitting your face. If you wanted to have a baby, it’s almost as if the universe or God is saying that you can’t have the one thing you’ve wanted and thought your whole life you could have.”

This deep shame goes back to Biblical times, where infertile women were painted as forsaken. “People just write it off – like, why don’t you just adopt? It’s easy to write off, but until you get into it, it’s just this big, deep Pandora’s box. Unless you’re in it, it’s just raw pain.”

She plunged herself into the process; going to therapy, giving herself daily injections, and attending countless medical appointments and ultrasounds. “I was super focused – whatever it takes – and I feel proud of myself that I went through the steps pretty efficiently.” In addition to all of this and working on the Netflix doc, she also managed to write two plays (including one called Hush, about infertility) and performed #ARTBIRTH.

She got pregnant the first try with a donor egg.

Watching Vegas Baby later when all was said and done, Reich felt sad and grateful for her son. “They’re in your vagina, they’re poking your veins you’re living this medicalized thing. It’s like cancer, but it’s not. You’re not fighting for your life but you’re fighting for an important stage in your life. To me, I don’t know what the point of life is if I can’t have kids. I’ve wanted to be a mom since I was three years old. It’s like being an artist – if someone [said to me], you can’t be an artist, I would be like, what’s the point of living? Or if someone said to me, you can’t be a lesbian anymore – it would be like, what’s the point if I can’t have love?”

Having gone through IVF, and giving birth to a healthy baby boy, she would do it again in a heartbeat. “Totally. My eggs aren’t good. I had to go through the whole journey to find that out. It’s a big emotional step to just give up, mourn your own genetics and move on.”

She wants others to know how they can support loved ones going through the same thing. “People should not give trite advice that minimizes the pain, like, ‘My cousin got pregnant by getting drunk in a hot tub and having sex with a guy. You should try that.’ Think of it like mourning a death. When somebody dies, you don’t say, ‘Oh, you’ll get over it!’ It’s a big deal. Listen to them and don’t offer up quick fixes.”

As a new mom, Reich has stepped into the role she’s always wanted. But it’s not a piece of cake. “Motherhood is so hard,” she admits. “I thought, well, I went through all of this infertility stuff so I’m super grateful. I thought it would be easier for me. No! I’m just like a regular mom now: I’m like tearing out my hair and have moments of ‘Why did I do this?'” {laughs}

Between working full-time, going to auditions and being a single mom, Reich is also bringing her broadway show, #ARTBIRTH, to Toronto this month. “It’s going to be really outrageous: lots of vaginas, and bodily fluids, and choreography. I give birth on stage. There’s a breastfeeding number. We talk about everything: vaginal discharge, placentas, you name it. It’s like this weird feminist commentary on celebrity culture and capitalism while being funny at the same time.” 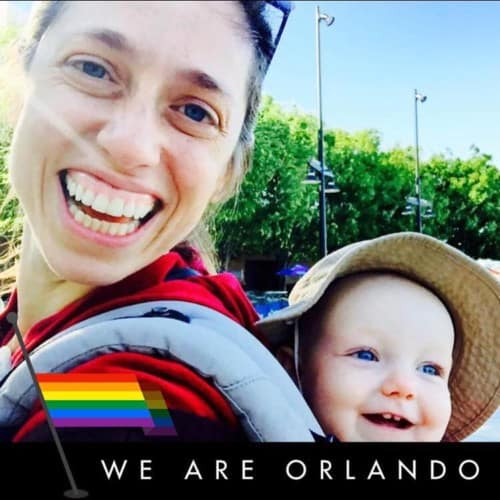 Despite the harried schedule now – and all of the pain and needles and hormones and heartache – she is happy she kept going. “I found the love that I wanted,” she says. “The thing I love most is, we co-sleep, and I feel like my favourite thing is putting him to bed, snuggling at night, breastfeeding – just feeling love and the physical connection that you have with your child. It’s totally addictive. It’s amazing.”