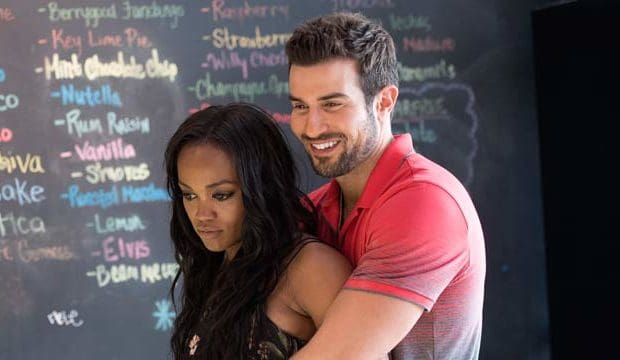 Reality TV is meant to be a guilty pleasure. It is pleasurable precisely because we the viewers know it presents an unreal version of reality. It is okay to laugh at over-the-top dates featuring carriages and swans, or people who get edited to make it look like they’re talking to raccoons. Such absurdity is par for the course. It is frothy escapism that is all in good fun. This week, however, The Bachelorette crossed the line and became far too real.

Settling in for the the annual “Hometown Dates” episode, I was excited to get to know the backstory of our ‘characters’. The concept of “hometowns,” as they are referred to by Bachelor Nation, is for the bachelorette to visit each of the final four contenders in their respective hometowns. So, I guess it’s exactly what it sounds like. The hometown visits are important, because they give our leading lady the opportunity to meet each man’s family. These encounters are usually hella awkward, as one would expect when people are told their son may want to marry someone he met a few weeks ago on a soundstage.

The familial tension that characterizes hometowns is always palpable, but usually benign. It gets washed down with white wine after a few passive aggressive comments. As a long-time viewer, I’ve never before felt uncomfortable watching these scenes. Until tonight, that is. Tonight, everything changed.

Admittedly, this week’s episode started out well. Rachel began her hometown tour by visiting Eric’s loved ones in Baltimore. She first played basketball with his friends, then met his warm and welcoming family.

Following weeks of skirting racial politics, Rachel was finally given a meaningful opportunity to discuss being the first black Bachelorette. This took the form of a conversation with Eric’s aunt, who dove headfirst into the subject. His auntie expressed sympathy about Rachel’s awkward position, where, whomever she picks, her choice will be politicized and dissected. I was thankful the producers finally gave Rachel the space to discuss her fears about being judged for the person she ends up falling for.

The only problem with Eric’s hometown date was he did not say, “I love you.” While it’s patently ridiculous to be in love with someone with whom you’ve basically been on two dates, not doing so typically means you won’t be the last one standing. On the bright side, I know at least six awesome single women I could set him up with. Eric, call me!

Next came Bryan’s hometown. This is where things started to take a turn. Admittedly, the B-roll of Miami the producers shot was so beautiful, I would consider picking Bryan just to live there. But first, I would make Bryan sign a prenup promising me I would never have to see his mother again.

Bryan has made it no secret that his previous relationship imploded because his girlfriend didn’t get along with his mom. This does not surprise me, as Bryan’s mother literally told Rachel she would “kill her” if she didn’t make Bryan happy. Not only is that  an aggressive, offensive thing to say, it’s strategically silly to threaten someone’s life on national TV. I always thought murderers tried to be more subtle. Oh well, Rachel took this threat to her mortality as a joke. She even laughed about it! I, however, am frightened for her life.

The third hometown date of the week was to visit Peter in Wisconsin. This trip was predictably bland. Peter has nice friends who got together for a nice meal, where they were told nice things about Rachel. His family uniformly had nice hair. Peter too is a nice, non-threatening person. I would call Peter the human incarnate of a Ken doll; he’s gorgeous, but sometimes he feels a little stiff  (I don’t mean in a sexual way, so get your minds out of the gutter, people!). Having said this, I don’t want to fire shots. There is nothing wrong with being a genuinely good and morally upright human being. In fact, I believe Peter would make a solid life partner. He just doesn’t make for very good TV. Watching Peter is like watching really pretty paint dry.

Finally, the time came for Dean’s hometown date. Dean himself was dreading this moment since Switzerland. Now, all of North America understands why. You see, after his mother passed away, his familial bonds fell apart. Dean is estranged from his father, but somehow (probably through considerable producer pressure)), Dean was convinced to introduce him to Rachel. Nothing good came of this.

Dean’s unusual family was reduced to a spectacle, their pain put on display as sadistic entertainment. Dean appeared to be on the verge of a mental breakdown the entire time. When he bravely expressed how his father’s neglect hurt him in the wake of his mom’s death, Dean’s father shouted that he was “living in the past.” Dean’s dad later stormed out of the house with a cup of tea he claimed needed to be “blessed.” Once outside, he aggressively spilled said tea on the ground.

In another scene, Rachel had a heart to heart with Dean’s weeping sister, who lamented what she perceived as her weakness in the face of her mother’s death. The whole visit was far too intimate. There was no campy fun. It was simply a too real portrait of a wounded family. I kept wishing the producers would whisk Dean away, telling him, “I’m so sorry we made you go through this.” Alas, no one intervened. Dean continued to suffer, his pain packaged as entertaining TV.

After the final hometown date was complete, it was time for The Rose Ceremony. To add insult to injury, Dean was the one who got eliminated. It goes without saying that Rachel let him down in her characteristically gracious fashion. She explained her worry that because he is only 26, Dean might not be “ready” for the things she wants. I did and do understand her concerns, but I do wish she’d acted on them last week, before his family were portrayed as circus freaks.

Well, suffice it to say this episode left a terrible taste in my mouth. I am going to brush my teeth extra thoroughly today. In happier news, next week is The Fantasy Suite! It’s time for Rachel to take her top three contenders to hotel rooms and have her way with them. I’m so excited!