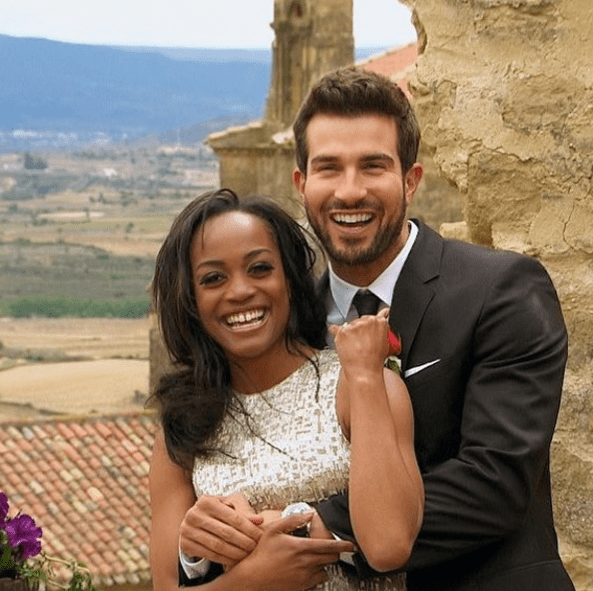 When the world found out ABC had finally cast its first black Bachelorette, Rachel Lindsay, there was much joy. There was also a healthy amount of fear. Would this casting choice amount to real progress in terms of racial representation on mainstream reality TV? Was the franchise finally getting woke to the fact that not only white people fall in love? Or was it just a ratings grab?

As I sit here at 11 pm on Monday night, trying to make sense of the finale, I am still unsure about what this season’s legacy will be in terms of the representation of race. What I do know, however, is that Rachel is a pro who handled being the titular bachelorette with the grace of a prima ballerina performing a scene from Swan Lake.

The episode began with the final two Fantasy Suite dates. While we at She Does the City smugly predicted via Twitter that Bryan would emerge victorious, it would seem even the producers were helping him along. While Bryan’s Fantasy Suite was a palatial work of modern Spanish architecture, Peter’s so-called Fantasy Suite looked like that dorm room you lived in during your undergraduate year abroad. It was so pokey, I wondered, “What did Peter DO to piss off the producers so much? Does he kill puppies and use their fur for coats or something?”

Anyway, after everyone received their “off-camera alone time” (yes, it probably involved coitus), it was time for the penultimate Rose Ceremony. Alas, my beloved Eric was the one who got the boot. As they sat on a bench processing their breakup, Rachel explained she “loved him” but wasn’t “in love with him.” In that moment, Eric proved gracious AF. There was no entitlement; there were no recriminations. He was simply a prince among men who will make someone very happy some day. I hope his mom was watching, because she should be very proud!

After Eric’s departure, it was time for Peter and Bryan to make their respective pitches for why Rachel should choose each of them as a long-term partner. Bryan went first. On their date, he gave our leading lady a homemade Spanish dictionary as a token of his affections. It contained words like “wife” and “love.” So, basically Bryan used this make or break date to give Rachel homework? It was a power move, but one Bryan was confident would work. He left Rachel’s room informing the cameras that he was certain The Final Rose was his.

All snark aside, however, Rachel and Bryan do appear to have a lovely connection. They made out and goofed around throughout their one-on-one time, just as they’ve always done. It was the sort of happy, comfortable date you should have with your almost-fiancé. There was little drama, no conflict. It was, to borrow a word Rachel used to describe their relationship, “mature.” Love, after all, doesn’t have to be hard to be meaningful.

Peter’s one-on-one date was decidedly more dramatic than Bryan’s. If Bryan is an easygoing, affable hunk, Peter is the brooding beauty. On their last night together, he and Rachel alternated between groping one another, and tearfully lamenting about how they want different things. Peter reiterated his stance that he loves Rachel but just isn’t ready to propose. In turn, Rachel restated her position that she wasn’t prepared to choose someone who was going to make her wait for a proposal. It was at the definition of an impasse.

At his lowest point, Peter accused Rachel of choosing “a mediocre” life with a man she wouldn’t love just to have a ring on her finger. Rachel was visibly (and understandably) wounded by his insensitivity. Having said that, their chemistry was so undeniable, she still couldn’t resist the world’s most lingering goodbye kiss. Once that was over, Peter proceeded to remove his sweater and use it as a Kleenex. This was a welcome piece of comic relief.

Rachel and Peter’s final make out session was so intense that Chris Harrison remarked at the live viewing party that it didn’t seem like they had “broken up” at all. Naturally, to drum up drama, the show forced Rachel and Peter to have an awkward encounter. This happened live, on stage, in front of a studio audience, just to maximize everyone’s discomfort.

Rather than wilt under the pressure of being confronted with Peter, however, Rachel thrived. She did not appear regretful. Instead, she looked Peter in the eye and declared, “You said I’d live a mediocre life; I’m living my best life.” Here is a woman who understands that living well truly is the best revenge! I am going to miss her so much now that her season is over.

Of course, Bryan was the one who ultimately received the opportunity to propose to Rachel. Said proposal occurred atop a windswept hill in Spain. This was not nearly as romantic as it sounds. The scene proved definitively that real wind is far less sexy than wind machine wind. I have no idea what the show’s location scouts were thinking!

As he requested her hand in marriage, Bryan gave a generic but seemingly heartfelt speech. He proclaimed proudly that Rachel is “the best woman,” and declared his wish to share a family with her. Then, as the heteronormative cliché dictates men must, Bryan got down on one knee. The whole affair was a windy fiasco, but Rachel left with what she wanted, a fiancé with whom to share her future. No, the proposal wasn’t perfect, but by Bachelorette standards it seemed pretty real.

In the minutes after proposal aired, however, the Internet basically exploded. The whole world seemed to suggest that Bryan was some sort of “consolation prize.” Everyone speculated that Peter would have emerged victorious had he only offered Rachel the proposal she so craved. But here’s the rub, fellow viewers: part of finding the right partner is considering the practicalities. Whether or not someone wants the same level of commitment that you do should be a priority. A difficult, tragic love like the one Rachel shared with Peter is not an inherently truer love.

In thirty-one years of living, I’ve learned that unhappy people settle for relationships that do not satisfy their wants and expectations. The best love isn’t always the most passionate (although judging by how much Rachel and Bryan made out after getting engaged, I wouldn’t say they lack passion). The best love is fun, generous, enjoyable, and ultimately, sustainable. Partnerships can benefit from lust and chemistry, but they aren’t built on those elements alone; they are built on two people’s shared blueprint for the future.

Admittedly, this season of The Bachelorette wasn’t perfect. The producers originally touted the choice of a black bachelorette as a hugely progressive step but rarely afforded anyone the opportunity to discuss race issues on camera. Not only that, but they gave Lee The Racist Misogynist Douche far too much screen time in the name of creating drama. But in the end, I enjoyed this season for what it did bring us: Rachel Lindsay as a fantastic role model.

Peter begged Rachel to stay with him, to choose him even though he wasn’t yet prepared to offer her marriage. Rachel, however, stood up for herself. She refused to be swayed by his luxurious kisses. She went into this season searching for her husband, and she refused to change course just because a beautiful man asked her to make an exception for him.

Whether or not you can relate to Rachel’s mission to marry, I believe all women could benefit from emulating her resolve. She is an individual who knows her own mind, who cannot be seduced into abandoning her standards. Simply put, she is a woman of substance who never settles. She provided us viewers with a revolutionary representation of strong, determined womanhood. Last winter, Rachel Lindsay was cast as a passive princess in an over-the-top reality TV fairytale; then she recast herself as the hero by taking control.

Well, dear readers, that’s it for this season. I would like to sincerely thank you for sharing this wild ride with me! But most importantly, I want to thank Rachel for sharing her journey with us. I realize she will probably never read these words, but she has become my new romantic role model. And she should probably be yours too…