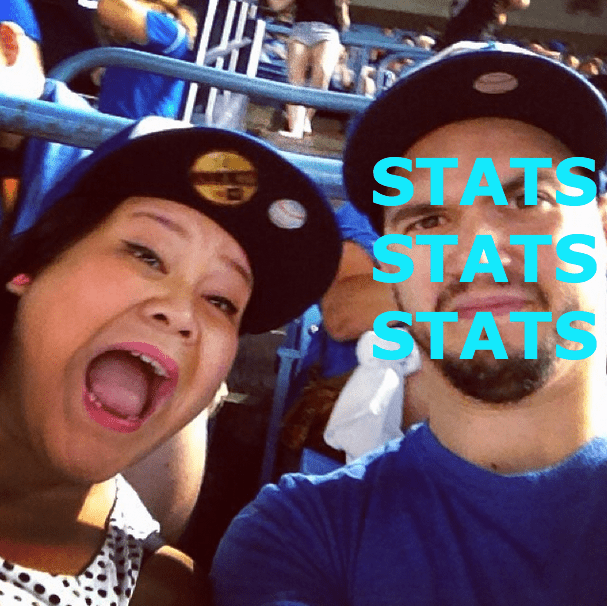 "Knowing at least the basics will elevate you from baller status to shot-caller status. Sure you love a hot bod and thick n' juicy seat meat, but you also respect the player enough to know how good they are."

Baseball Stats And You: It’s Time

We’ve now passed the halfway mark in the regular baseball season and you’re a certifiable baseball babe. You’ve watched the games both at home and in the Skydome and you get the basics of how the game works. You’re so down with the terminology that you know that a “force” isn’t a Star Wars reference and that a “balk” isn’t Bronson Pinchot’s character on Perfect Strangers.

Plus, you’ve found the perfect Blue Jays hat to match your personal brand and you’ve lost hours of your life Googling “Jose Bautista’s butt” and “Colby Rasmus’ cornrows.” And as a plus, you’re savvy enough to know that even though our Jays have fallen out of first place in the American League East, it’s still too early to roll out the hearses and declare the rest of the season deader than Carly Rae Jepsen’s career (RIP girl, u tried). They’re still alive and well in the race for the wildcard spot and even in their division. You know this because you’ve got. this. on. lock.

No. Come back. Give it a chance! TRUST ME, I get it. You’re probably all, “I’m not reading your shit for math and statistics, Ann. I CAME FOR THE BUTTS.” Or “Ann, you haven’t yet filled your quota on using the word ‘thick’ so when’s that gonna start?” Stats can be intimidating and I still don’t know what all of them are or what they mean, but if you’re gonna be a fan, knowing at least the basics will elevate you from baller status to shot-caller status. Sure you love a hot bod and thick n’ juicy seat meat, but you also respect the player enough to know how good they are. Or, like, what if you were in an elevator and in walked Adam Lind and you wanted to let him know that you’re a huge fan… how’s he gonna believe you and fall in love with you if you don’t even know what his average is? (Side salad: if I was ever in the same room as Adam Lind I would fall over and die and then explode into a heart and boner-shaped fireworks display.)

But I digress. Here’s a quick and dirty cheat sheet of the stats you’re likely to hear about. This is by no means comprehensive and thorough, but it’s a start. Also don’t worry, I’m not gonna get into how they’re calculated because honestly? Eff that noise.

AVG or BA (Batting Average) – If you’re looking at the Jumbotron, this is the number that’s right next to the player’s name. This number indicates how well a batter is hitting. A league-wide AVG ranges between .250 to .275, a great average is anything over .300, and a perfect average (basically impossible nowadays) is .400. Right now the Blue Jays with the top 3 AVGs are Nolan Reimold (.333), Adam Lind (.320), and Melky Cabrera (.320). Technically pitcher Drew Hutchison has the highest (.667), but that doesn’t really count because he’s had 3 at bats, compared to Melky who’s been at bat 435 times. 435! Even Reimold’s average is a bit misleading because he’s only been to the plate 12 times, but this is already getting too complicated, so let’s just say the Melk Man’s average is incredible.

RBI (Runs batted in) – This number signifies how many runs are scored due to a hitter’s ‘at bat.’ So let’s say Reyes and Cabrera are on 2nd and 3rd base and Bautista hits a double all the way to the wall, so Reyes and Cabrera manage to score. That’s 2 RBIs for Bautista because it was his hit that brought 2 runners home. The Blue Jay with the most RBIs is Edwin Encarnacion at 70, which is INSANE because due to injury, he hasn’t even played since the beginning of July. Basically, prior to hurting himself, he was killing it.

OBP (On base percentage) – This measures how many times a batter is able to get on base via hits, walks or getting hit by a pitch. Even though walks are less fancy than hits, they’re still important because it means you’re on base and you didn’t get an out. The Blue Jay with the highest OBP is none other than Joey Bats, Jose Bautista, at .416, who’s got the second highest OBP in the entire MLB.

OBPS/OPS (On base plus slugging) – This number is the OBP (a player’s ability to get on base) plus Slugging Percentage (a player’s ability to hit with power, i.e. doubles, triples and homers). If you watched the movie Moneyball and paid any attention to what Brad Pitt was saying, this stat is pretty important to sabermetrics. But if you’re anything like me, you did watch that movie, and for sure just heard white noise whenever anything relating to boring numbers came up. Which was basically the whole movie, so maybe I shouldn’t say I “watched” Moneyball, but rather, “took a nap” during Moneyball. The Blue Jay with the highest OPS is Encarnacion, surprise surprise. He hit 16 home runs in the month of May alone. Edwin Encarnacion is to home runs as Ann Pornel is to chocolate-covered strawberries. THEY DEMOLISH THEM WITH NO MERCY.

HR (Home runs) – Pretty self explanatory. See directly above for the Blue Jay with the most homers. 26 HRs!!

H (Hits) – Also pretty self explanatory. Cabrera and Bautista lead the Jays in hits with 136 and 106, respectively.

R (Runs) – This number is how many times the baserunner managed to safely reach home plate to score a run. Bautista leads the pack with 68 runs.

The above is just an amuse-bouche of the available stats. On their own, they don’t mean much—it’s when you put them all together that you get a real sense of a player’s contribution to their team. There are way more stats to be talked about, and I didn’t even talk about pitchers’ stats, which is another rabbit hole in and of itself. But for now, this is more than enough info you can use to impress people with your baseball savvy. Unless that person is Adam Lind, in which case HANDS OFF HE IS MY SOUL MATE I LOVE HIM I MISS HIM I CAN’T WAIT FOR HIS BEAUTIFUL FOOT TO GET BETTER PLEASE WON’T YOU LET ME KISS IT AND YOU UNTIL YOU’RE FULLY HEALED.

I just love baseball, you guys.