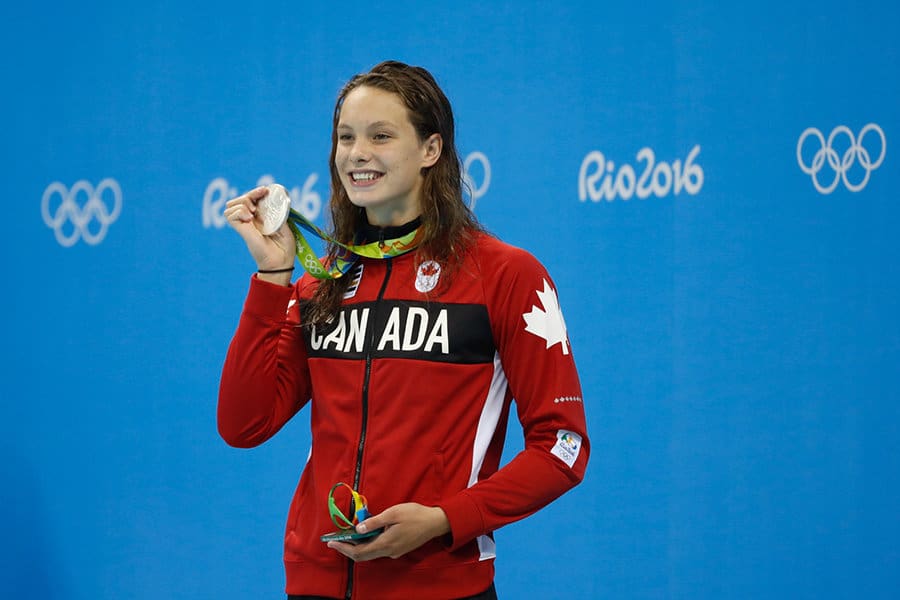 I’m not going to pretend I have any great knowledge of (or particular interest in) the Olympics. In fact, I feel like 50% of Olympic coverage is actual spotlight on the athletes while the other 50% is always this weird, “will they/won’t they” narrative about the host country’s hosting skills. But so far I’ve found one narrative I can get behind (besides Kayak Sofa that is), and that’s the way Canadian women are killing it this Olympics.

Don’t get me wrong, all Olympic athletes deserve recognition for the incredible amount of work and dedication that goes into their achievements. But in a world where brands like Dove are still reminding us to focus less on an athlete’s nipple size and more on her accomplishments, I feel this needs to be celebrated.

So who are the women that have thus far carried Canada’s medal count? Most notably, we have impressive sixteen year olds like Penny Oleksiak, who took home four medals for Swimming (including one gold), shares an Olympic record for 100-metre freestyle and got into a Twitter convo with none other than the 6 god himself to boot.

We also have some vets like Lindsay Jennerich, who competed in the 2012 Summer Olympics, and won silver in Rio for Rowing with her partner Patricia Obee. Not to mention young superstars Rosie MacLennan, Taylor Ruck, Sandrine Melville and the Women’s Rugby Seven and Women’s Team Pursuit Cycling teams.

Besides the fact that women are all-too-often judged based on their appearance or outfits rather than accomplishments, women’s sports just aren’t made into a thing. While I’m sure at multiple points throughout the year female athletes are dominating in one arena or another, unless it plays into a larger event or you follow the sport avidly, you’d never know. The Olympics helps push them into the spotlight by giving them a global audience and a larger story to play into.

That’s why, while casually Googling the Canadian medal count as though I understand how the Olympics works, I was pleasantly surprised to see Canadian women bringing home the peameal. It appeased my more cynical self to see coverage condemning media outlets for referring to Olympic medal winners as “the wife of so and so.” It made me proud that the Canadian coverage of our athletes was focused on how insanely talented they are. Most importantly, it gives me hope that one day both my niece and nephew can look to these incredible women as role models and be inspired by their outstanding achievements.