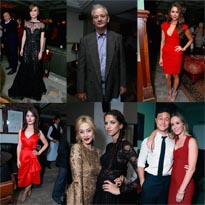 Behind the walls of Soho House, the hottest venue at TIFF 2012

Since opening night, dozens of TIFF events have taken over Soho House and the scene always got wilder as dawn drew nearer. But alas, this hub of Grey Goose vodka-splashed revelry is finished for TIFF 2012. However, on Sept 15th, the 10,000 square foot members only club will open as a permanent fixture in Toronto. Members are nominated, applications are vetted and those selected will pay an annual fee to this creative social club. There is even a special membership for movers and shakers under 27. (We’ll keep you posted on what this is all about.)

In years past, it was always the Park Hyatt rooftop that got the most A-list action late at night, but that changed when Soho House opened their permanent Toronto address doors early. The London-based society club had pop-ups during TIFF for the past 3 years, and they always received serious star wattage, but this year it became the official it-spot for the hottest film parties and late night revelry.

The rough, half-finished renovations didn’t deter film distributors from booking consecutive nights of splashy events, and in a way the decor gave the joint a sort of edgy and underground feel. When doors officially open later this month we can expect a much more polished version (i.e, bathroom doors won’t be plywood).

Soho House Toronto, Bishop’s Building, is located at 192 Adelaide Street West. The members only club is set to open on Sept 15, 2012.