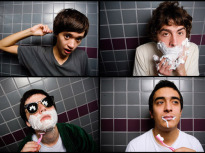 By Kait Fowlie
Does this heat have you craving ice cream and free awesome music? Well if so, you are in luck! Soundscapes presents California based indie rockers The Morning Benders, rocking the cow–adorned walls of the Big Chill Wednesday at 5:30. Yes, you read this correctly, an acoustic show in an ice cream shop. (How novel!)

The Morning Benders are a pop-tastic 4 piece with a healthy injection of psychedelic, and have been known to tour with Broken Bells and The Black Keys. Heavily influenced by Grizzly Bear, expect an experimental flavour with a bit of shabby appeal. Their 2010 album Big Echo received amazing reviews for their sunny and charming melodies – which we think would go well with a strawberry milkshake.

Without raving too much about the universe of flavour that is the big Chill, I advise you to not leave this show without trying a few flava-flaves. The Big Chill is at 367 Manning ave. at College St.

Get ready, get set, get records! Record Store Day is this Saturday, April 21st

Liz Ikiriko, owner of little shop of wonders The Arthur on College St., takes after her grandparents' magpie spirit and brings you treasured goods

Win tickets to The Elwins CD Release Party, featuring Meligrove Band, Bicycles, and a DJ set by Tokyo Police Club, at the Burroughes Building this Friday!