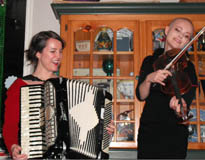 In my inbox there was a mysterious invite from novelist Ibi Kaslik (disclaimer, she’s my writing instructor). The last time I saw her read was at Literary Death Match Toronto, a month or two ago. This time, the invite was for a Cabaret night organized by a trio that called themselves the Black Heart Bitches and since I could relate to their moniker, I was down for some literature, song and dance.

Held at a beautiful, bohemian old house in Little Italy, I was instantly greeted by a charming young lady at the door who took my coat and the scent of mulled wine, clementines, cinnamon and nutmeg. I made my way to the kitchen where the sassy Adrienne Amato, one-third of the Black Heart Bitches, poured me a large glass of mulled wine. The atmosphere was uber arty, the crowd eclectic and within minutes, new friends were made.

Holly Luhning, the second third of the Black Heart Bitches and author of an eagerly anticipated fiction novel to be released in 2011, MC’d the evening. The performances themselves, which took place in the cozy main floor living room, were excellent. The extremely charming Moez Surani read a short story, about the complicated relationships that persist into our twenties and thirties. His piece ended abruptly and powerfully, leaving the audience momentarily speechless, except a faint and collective “wow”.

Ibi, the third part of the Black Heart Bitches trio, read from her most recent novel, The Angel Riots, while the Super Friends Improv group had everyone howling with laughter.

The last performance of the night was a show-stopping set by musicians Willow Rutherford and Virpi Kettu. It’s not often that you get to hear beautiful, fun pop-folk vocals by someone also playing the accordion but Willow rocked it with Virpi Kettu, who was on the violin.

As this awesome night came to a close, I was reassured that there was more to come from the Black Heart Bitches, so stay tuned…