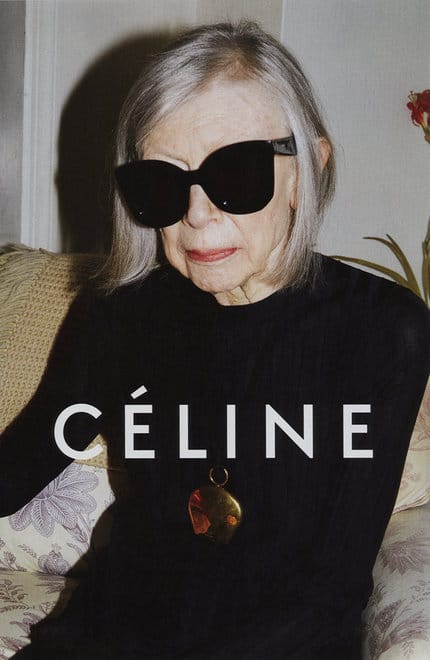 What is Céline REALLY doing with Joan Didion?

Last week, the Internet fell into a fit of verbal diarrhea after Céline unveiled its newest “dream girl” – Joan Didion.

The Internet didn’t know what to do with itself after a luxury French brand revealed the face of an 80-year-old National Book Award writer, graced by tragedy and resounding self-awareness; wearing signature Céline sunglasses. The National Post balked that Didion was “so cool it circled back to lame” while Gawker framed the story as a cry for help – “Dear God, What Have They Done to Joan Didion Now?”

But what is this $172.2 million brand really trying to tell us?

Joan Didion is a writer’s writer, not your regular luxury brand advocate. Esoteric, she’s an iconic intellectual that women idolize because she’s heroic in her self-absorbed narrative. Her literary genre is a stark contrast from the self-help, rah-rah cheerleader crap we read to remedy things like bad relationships and negative habits. It’s a writing style that’s confrontational and helpless; with protagonists who can’t help but drown themselves in the sorrows of feeling homesick, dejected and made worthless by loved ones.

It’s a glorified sad-fest and that’s not pretending to be anything but tormented, honest and irrational. Joan Didion is not the “dream girl”, she is a heroine: An 80-year-old woman made famous by the anxiety in her words, not simplicity in style. Coming from an author who firmly believes the media is telling us how to live our lives; the resulting effect is that the advertisement for Céline feels hostile – like a picture of a kidnapped hostage.

Behind the over-sized black sunglasses, Céline alludes to glamorous privilege with the face of tragedy. Didion is sprinkled with the atypical qualities of a fashion house icon: Described as “timelessly beautiful”, “effortlessly stylish” and “achingly cool.” Her aesthetic is endearing, easy to emulate and deceiving. She blends in, the way some women want to disappear, with bulky sunglasses or a baseball hat.

Fashion is once again tackling the elements of the elegant uniform. And her style, uncomplicated, is true to the aesthetic that Phoebe Philo preaches about. To string this obscure love story together, VOGUE even compared a photo of Didion, sitting in her 1969 Corvette Stingray next to Daria Werbowy; to showcase the cool rebellious sexiness of the two women.

Didion, by nature, was an early adopter of the traditional portrait selfie, with a collection of photographs capturing her smoking skinny cigarettes and posing on armchairs. As per VOGUE’s justification, being cool clearly came naturally to her, so it only made sense that she would graduate to become the face of a brand like Céline.

The brand’s secondary play is obvious; she’s not a young supermodel or a glamorous actress – she’s an octogenarian woman. And we can collectively gawk at the wrinkles, sun spots and hunched skinny frame like never before. In the campaign picture, her hair is glossy, grey, and shiny from the flash of the camera, carefully edited to expose a natural at-home effect. She looks frail, relaxed and weak. Frowning, it’s hard to tell if she knows that this photo will be used for a major fashion campaign; adding to Didion’s ambiguous look.

Nonetheless, while the clarity of what’s really going on here remains unclear – the astounding shock of this entire campaign is nothing short of a complete success. To which Didion herself, when asked if she was aware of the sensation she caused in a New York Times interview, responded “I don’t have any clue.” Case in point, Céline has successfully shocked the world with Joan Didion, and maybe that’s all they really intended to do in the first place.