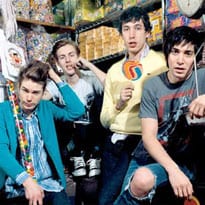 by Haley Cullingham
The Virgins are superfoxy. This seems to be the one thing just about everybody knows about them. The second thing? They’re superfoxy in that New York City-I’m in a band-How tight are my jeans? Come over here and find out-sort of way. But here are some things you didn’t know: Their song ‘Rich Girls’, which made it onto Rolling Stone’s Top 100 Songs of 2008, is one of those tracks you know all the words to before you know who it’s by. Formed in 2005, they’ve have earned street cred opening for rock ‘n’ roll heroes like Sonic Youth and Patti Smith, and with spots on the roster of the starmaking South by Southwest Festival in Austin, Texas, and newly-inaugurated All Points West Festival (put together by the team that runs Coachella) last summer in New Jersey. Like their name suggests, they’ve still got new-kid-on-the-block status, but that’s something that’s rapidly changing. Songs featured on Gossip Girl and comparisons the The Strokes and The Killers are sending them straight to the top of the indie food chain. Have a taste: She Does The City has THREE sets of tickets to give away to their show Feb 5th at the El Mocambo. To win, send an email with the subject line ‘Rich Girls’ to contests@shedoesthecity.com